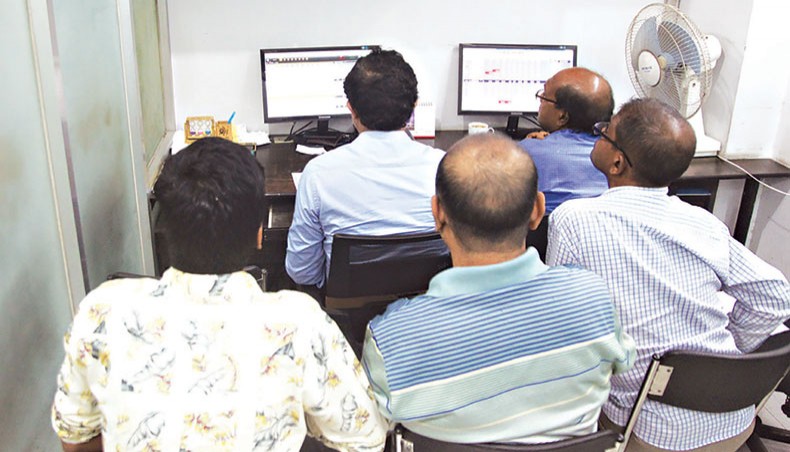 A file photo shows investors monitoring movement of share prices at a brokerage house in Dhaka. No listed company has held extra ordinary meetings within one month of shutting down production since the inception of BSEC rules in 2010 which make it mandatory for the companies to hold the meeting within the stipulated time informing shareholders about the reasons for closure. — New Age photo

No listed company has held extra ordinary meetings within one month of shutting down production since the inception of Bangladesh Securities and Exchange Commission rules in 2010 which make it mandatory for the companies to hold the meeting within the stipulated time informing shareholders about the reasons for closure.

Despite repeated violation of the rules, the BSEC is yet to take any action in this regard.

On July 4, 2010, the BSEC issued a directive asking the companies to get shareholders’ approval if they decided to lay off factories.

A senior Dhaka Stock Exchange official told New Age that many companies had in these 10 years closed production but none of them held the mandatory shareholders’ meeting to explain why the decisions were taken.

Usually, companies inform the bourse if their boards decide to lay off factories for a period, but no company has notified the DSE of holding the shareholders’ meeting after shutting down operations.

According to the BSEC directive, the companies that declare lay-off of their factory must hold extra ordinary general meeting (EGM) within one month of such declaration.

In the EGM, the company must inform its shareholders of the reasons behind laying off the factory and taking such a decision and the future plans of the company regarding its operation on a probable date of reopening the factory, it said.

Besides, the company must submit the relevant notice of the EGM and the decision taken in the EGM to the commission, stock exchanges and the shareholders concerned immediately  upon issuance of the notice and holding of the EGM, it said.

The regulator framed the rules so that general shareholders of companies can exchange their views regarding such decisions in the EGM and know about the future business plans of the companies, BSEC officials said.

For instance, Al-Haj Textile Mills Limited shut its factory on June 25, 2019 due to massive decline in sales over lack of demand on the market and shortage of working capital, according to a post on the DSE web site.

Bangladesh Welding Electrodes closed its business operation in 2017 due to a severe cash crunch and failure to open a letter of credit on becoming a defaulter with a private commercial bank.

But none of these two companies held EGMs to explain the reason behind operation closure as per the securities rules.

BSEC executive director and spokesperson Rezaul Karim told New Age that the commission would take action against companies which had declared lay off but did not take approval from shareholders about it after one month of closing operations.

DSE officials said that the bourse had recently visited the factory premises and head offices of Tung Hai Knitting & Dyeing Limited and C & A Textiles Limited several times and found them closed.

Investors and regulators do not know when the companies actually shut their production.

Sponsor-directors of these two companies sold-off their entire holdings without any prior declaration following which the current commission fined the directors who had already left the companies.

Some other companies have also shut down production without informing the regulators on time, let alone taking the shareholders’ approval.

Market experts said that the BSEC had failed to implement its rules on the market which had encouraged errant companies to continue violating the rules.

It was the investors who suffered the most due to the regulator’s inability to bring governance on the market, they said.

They also said that if the companies were held accountable to the shareholders and regulators, the deterioration of many companies could be prevented.