The tyranny of the forest department in Madhupur 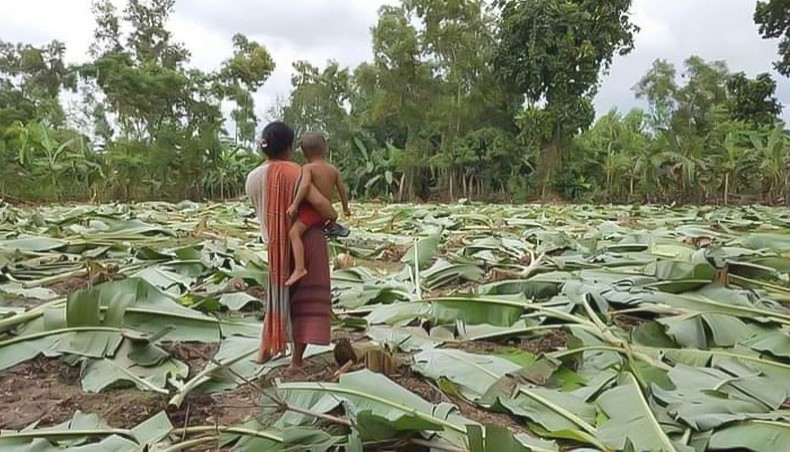 On September 14, The Forest Department has cut down a small-scale banana plantation of Basanti Rema, a Mandi indigenous forest dweller. Protesters formed human chains and claimed that the forest authorities have been nurturing the colonial mentality and using colonial legal tools to restrict indigenous communities’ access to the forest and resources. Nabangsu Chakma argues that the dated acts need to be replaced to protect the forests and indigenous communities

The recent instance of cutting down the banana plantation of Basanti Rema, a Mandi indigenous forest-dweller, at Madhupur of Tangail, is a victim of the same tyranny that has been going on for a long time. Basanti is a resident of Pegamari village under Sholakuri union.

According to the locals, the banana plantation was the only source of income to her family and yet the forest department has completely destroyed her plantation, that too without any prior notice on September 14, 2020. Being outraged by the incident, the local indigenous people surrounded the Dokhla Range office and protested, demanding punishment for the perpetrators and adequate compensation.

Earlier, five acres of pineapple, papaya, ginger, turmeric and banana plantations of the Mandi indigenous people were destroyed without any prior notice, in Amtoli and Kakraguni villages of Aronkhola union, by the Forest Department.

At least ten indigenous families have suffered the loss of their only source of income.  Most of them have farmed these plantations by taking loans. Now they are in utter despair.

Prior to the British colonisation of India, large parts of lush forests were under the jurisdiction of the local indigenous communities. These indigenous communities were the originals inhabitants of the forests. For centuries, these communities have sustainably managed forest resources and developed their very own traditional rules, regulations and sanctions.

After the colonisation, the colonial government in order to establish control over forest resources, abolished the traditional community resource management systems under the pretext that the local communities were unable to manage resources effectively.

Thus, the Forest Department was established in 1864 with the responsibility of managing forests, especially reserve forests. Then, the first forest law the Indian Forest Act, 1865 was enacted giving vast powers to the forest officials to protect forests from overexploitation.

Thereafter, succeeding the previous forest laws, The Indian Forest Act, 1927 was enacted which allowed the government to expand RFs by annexing any kind of forest, authorising the government to declare more forests as RFs in the name of better management and conservation.

The local indigenous communities of the Madhupur forest believe that it is their ancestral place. And thus, they have been sustainably cultivating rice, fruits and vegetables, in addition to collecting timber, firewood, herbs, medicinal plants and hunting wildlife for generations.

In 1973, the East India Company and the local landlords (zamindars) signed a contract, the Permanent Settlement Act, under which the zamindars gained ownership rights in their specific territory under the auspices of the British colonial government. Therefore, the forest and the indigenous communities directly came under the zamindari of the Raja of Natore who later dedicated the forest area to the god Govinda as debattor (endowed property).

Throughout the colonial rule, the Mandis and the other indigenous communities paid taxes to the zamindar, in return they enjoyed land and forest rights from the zamindar, and collected forest resources and managed the forest in great peace and harmony.

However, when the colonial rule ended, the government of Pakistan enacted The State Acquisition and Tenancy Act, 1950 (East Bengal Act) and abolished the zamindari system of land tilting, acquiring all the natural forestlands as the property of the state.

From then on, onslaught on the indigenous forest dwellers began.

This first started in 1984 when the government declared most of the Madhupur Forest as government property, and published this through a gazette notification. The whole procedure was done without any consultation with the affected indigenous communities. The Mandis claimed that the listing in the gazette was wrong and based on a false map, and they were never notified.

In 1962, the then government of East Pakistan made Bengali settlements on the Mandi lands totally disregarding the land rights of the Mandi people. In the same year, the government of East Pakistan declared the Madhupur forest to be a national park, and wanted to evict the indigenous communities, including the Mandis. Somehow the indigenous people were able to avert it back then.

Once, the Mandis and the Koch were the majority here. But the Bengalis became the dominant community since the Forest Department settled them to implement the projects there. According to the local indigenous people, since they were unable to pay bribe to the Forest Department officials, they couldn't get involved in the social forestry projects.

So, the Forest Department involved the Bengali settlers instead of the original inhabitants of the forest in those projects. In a door-to-door survey of 2009, conducted by the Bangladesh Environmental Lawyers Association (BELA) found that 4,129 Mandi families claimed total 8,171.74 acres of land; on the other hand, the settlers were occupying around 5,547.17 acres of land in the forest.

The Act of 1927 was promulgated with a view to regulating the forest, the transit of forest-produce and the duty leviable on timber and other forest-produce.

During the British Raj, the colonial government’ sole purpose of forest management, through the Forest Act and the Forest Department, was only to generate revenue. Protection and conservation of the forests were not at top of their mind. Even with time, such colonial policy and attitude have not yet eroded. The colonial legacy still lives on, this is well reflected on the various commercial projects, in the name of social forestry, like rubber and eucalyptus plantation and acacia pulpwood plantation et cetera by destroying the natural Sal forest.

In one instance, the Bangladesh Forest Research Institute (BFRI) received 400 acres of Sal forestland, but later, the Forest Department reduced this to 200 acres of land, because of commercial tree plantation programme.

The controversial social forestry programmes, in other words commercial programmes, create only limited scope of participation for the people. The forest dwellers get little chance or no chance at all to have a say in these programmes.

The indigenous people allege that, instead of them, the Bengali settlers and outsiders get to be involved in these programmes through bribery and large concessions of plantation are made to the private sectors. Initially, international financial institution like Asian Development Bank (ADB) funded these environmentally harmful monoculture plantation programmes which run to date.

Last year, in one seminar, organised by the Association for Land Reform and Development (ALRD), Raja Devashis Roy, the Chakma Circle Chief, said, ‘Social forestry is neither social nor forestry, and it is not social because it is controlled by the Bangladesh Forest Department officials, not by the society or even the beneficiaries of the social forestry programme. In the social forestry programme, only a few types of plants like the eucalyptus, acacia, pulpwood, et cetera are planted, and hence these woodlands cannot be recognised as natural forests which possess biodiversity.’ He further remarked that these programmes are not certainly suitable for the plains and as well as for the Chittagong Hill Tracts.

Time and again, the FD has termed the traditional forest and land rights of the indigenous forest dwellers as adverse claims, completely brushing away the fact that these people have been living there even long before the Forest Act and the FD were created.

In 2003, the FD without any consultation, began constructing a three-meter-high wall around the Madhupur Sal Forest, with an aim to create an eco-park to protect the forest, obstructing the indigenous forest dwellers' main access routes to the forest. Not to mention, these indigenous communities are very much dependent on the forest. To them, losing access to the forest would mean completely losing their way of life.

Having this on their mind, they strongly protested against the eco-park project. The resistance resulted in indiscriminate arrests, false cases, extra judicial killings, including assaults on women and children in 2004.

During the protests, Piren Snal, an indigenous rights activist was killed by the police. Another activist, Cholesh Richil was extrajudicially killed in police custody. Many others were reportedly tortured in custody. The Bangladesh Legal Aid Service and Trust (BLAST) thereafter filed a criminal case but the case still remains under trial.

Over the years, the FD has falsely filed hundreds of cases against the indigenous people, accusing them of illegal logging, to harass them. Falsely criminalising the indigenous people became so bad that the government had to intervene and reduce cases from 7,252 to 150, in 2009.

Whereas every administrative department has delimited powers and functions under provisions of their respective laws, contrarily, the FD is the only one which has no such demarcation in the provisions of the Forest Act. If carefully looked, it is evident that the Forest Act under its provisions hasn’t really conferred any responsibility and duty upon the FD to protect the forests, except for collecting revenues.

The forest settlement-officer and the forest officer are almost given powers without adequate checks and balances. No wonder why, in one interview, Syeda Rizwana Hasan, the chief executive of BELA termed the FD ‘a landlord without responsibilities.

The Mandis have alleged that, the FD raids only on their lands while the lands illegally occupied by the powerful outsiders, private industries and settlers are left unharmed from such raids, and all of them are colluded in this. The indigenous people have identified political leaders, forest department officials, land grabbers and settlers as responsible for destroying the natural forest.

To some limited extent, section 28 of the Forest Act empowers the government to assign power to village communities to govern and manage reserve forests. Also, the government may make rules for regulating management of ‘village forests.’ The section 28 also gives primacy to the rules over the provisions of the Act, in case of any inconsistency.

However, so far, the government has visibly made no attempt to frame rules on village forest, let alone make any rule. In 2006, to redress the ‘historical injustice’ committed against forest dwellers, our neighbouring country India enacted The Scheduled Tribes and Other Traditional Forest Dwellers (recognition of forest rights), Act.

While our social forestry failed big time to conserve forest effectively, our another neighbour, Nepal has been brilliantly able to protect and conserve their forestlands by introducing community participation in the Forest Act, 1993. They decentralised the whole forest management system and assigned the power to the local communities. The transparent governance empowered the local people and bridged the power sharing gap between the forest officials and the local people. In no time, they were successfully able to cut down deforestation rate to 1.7 per cent.

The recent destruction and the ongoing systematic tyranny by the FD must be stopped. The government should make adequate arrangements to compensate and ease the sufferings of the victims. The already marginalised forest dwellers of Madhupur Sal Forest have suffered unbearable injustices over the years, and any further injustice would only push them to the brink of extinction.

This is not the first time that such a cruel incident happened and most probably won’t be the last one if justice gets denied and the culprits go unpunished. Time has come to redress the injustices suffered by the indigenous communities by recognising their rightful land and forest rights.

The colonial Forest Act must be amended to make it more pro-people and the powers and functions of the FD must be explicitly demarcated. Otherwise, we will not only lose our original guardians of the forests — the indigenous communities — but the last remaining forests as well.

Nabangsu Chakma is a student of law at the University of Dhaka.