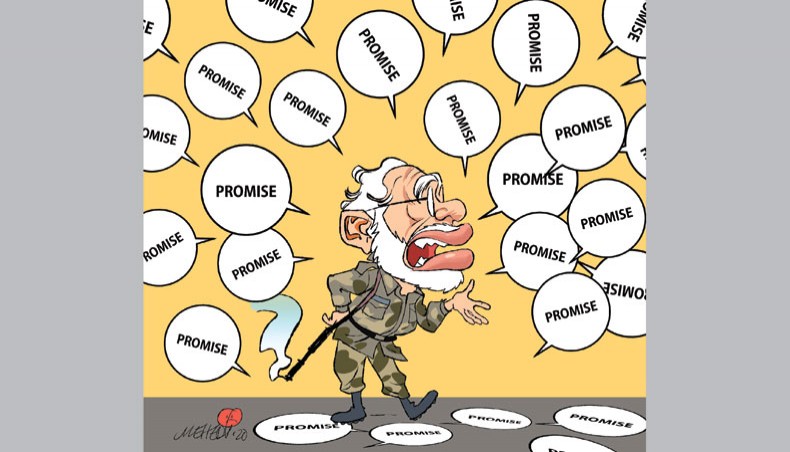 The newly-appointed Indian Border Security Force director general, Rakesh Asthana, made a fresh promise to bring the number of border killings to zero.

Besides, both Bangladesh and India have agreed to continue a robust coordinated patrolling, intelligence sharing and awareness building programmes to curb cross-border smuggling of cattle, narcotics, and fake currency notes.

‘I reiterate that we are committed to bring it to zero level.  I can only tell you, since I have joined recently, I only tell you, and you will see the reference,’ said Rakesh in a joint press conference following the 50th border conference concluded in Dhaka on Saturday.

Terming border killings ‘unfortunate,’ the chiefs of both Bangladesh and Indian border guards, however, said that criminals were getting killed inside India in border-related shooting incidents.

But both Indian and Bangladesh rights groups have been campaigning for inquiry into the shooting deaths alleging that they are mostly fired at from close distance along the border.

In the past, Indian government made assurances that the border killings should be brought to zero and in 2011 the two countries signed a memo to this end but killing and injuring in shooting continued.

In the 48th BGB-BSF summit conference in Dhaka in June 2019, the BGB DG Major General, Md Shafeenul, expressed his concern over the killings of Bangladeshi nationals in bordering areas and expected that the BSF would take necessary measures to bring down the deaths.

The then BSF chief, Rajani Kant Misra, too termed those killings unfortunate and promised to bring down such killings to zero.

A joint statement issued on September 7, 2011 over the visit of Indian prime minister Manmohan Singh to Dhaka also decided to prevent the loss of lives along the border.

The BSF chief claimed that smuggling of cattle, narcotics, gold, fake Indian currency notes, and weapons and ammunitions were criminal activities and in order to prevent these sometimes his force opened fire resulting in ‘unfortunate deaths’ in the past.

‘We have assured our BGB counterpart that we will bring it down with the joint coordinated patrol systems, which had been stopped due to the COVID-19 pandemic,’ he told reporters over the recent increase in the killings of Bangladeshis.

At least 34 Bangladeshis were killed alone this year.

Asked why Bangladeshis were targeted on the head, chest and stomach during the shooting, the BSF chief said, ‘As a last resort, they opened fire from lethal weapons. However, I am not justifying any killing.’

He went on, ‘It is already instructed, if you need to fire, fire at the lower portion of the body but this incident takes place at the dead hours of the night when weather condition was not good, visibility was not good and then the fire takes place, then such type of unfortunate incident do take place.’

He further said that criminals indulged in organised crimes or smuggling and mostly they were shot at, adding that available figures showed that 70 per cent of the incidents took place between 10:00pm and 5:30am.

‘Most of the operations are taking place in Indian territory when they have crossed our border and they have been challenged.  In these exchanges, sometimes—more than 60 persons of India have been killed’.

The BSF stated that this year 52 BSF personnel were injured by criminals. Asked about the use of lethal weapons, the BSF chief claimed that sometimes two or three personnel were mobbed by more than a hundred people.

The BGB chief echoed the BSF chief when he too said that most of the incidents took place in the night or in the early hours.

‘These criminals cross the border and go deep inside India where the confrontation takes place. As a result of that confrontation, sometimes the killings take place,’ the BGB chief said.

When another journalist asked as to how Bangladeshis managed to go deep inside India despite the presence of border guards, the BGB chief replied that it was a very porous border with mountains, marshes and rivers. But they are now taking the help of technologies so that people can be prevented from trespassing, he mentioned.

When it was mentioned that BSF men killed a Bangladeshi at about 10:00am on September 10 at the northern Thakurgaon border when he was fishing in a bordering river, the BGB chief said, ‘I think it is one of the odd cases and I would request the DG BSF to investigate this particular case which took place along the river during the day time’.

The BSF chief replied, ‘We definitely will look into it, and take appropriate action as well as the preventive measure for future’.

India sent a 6-member delegation to the bi-annual border conference held from September 16 to 19 and the 13-member Bangladesh side comprised representatives from the Prime Minister’s Office, and the ministries of home and foreign affairs.

The BGB chief said that they undertook an awareness building programme so that people would not cross the zero line and go deep inside India.

He said that joint patrolling would continue and it would start immediately. ‘Then see the result how it comes up,’ he added.

About the drug smuggling, the chiefs of both border forces said that narcotics had no border and it was a concern for both the countries.

In the joint press statement, both sides stressed the need for effective implementation of the Coordinated Border Management Plan.

Both sides also agreed to take effective steps to prevent human trafficking, illegal crossing of the international border, aid victims of human trafficking and facilitate their rescue and rehabilitation as soon as possible as per the law of the land.

Expressing concern over the recent infiltration or push-ins of mentally challenged persons, both sides agreed to verify their nationality and thereafter their return or acceptance processes could be expedited with the cooperation from the other side.

The joint statement said that both sides agreed to facilitate the development work of the Banglabandha-Phulbari immigration check post in accordance with the existing norms.

Appreciating the cooperation extended by the BGB and other security forces of Bangladesh against Indian insurgent groups, the BSF chief sought further cooperation from the BGB to destroy the reported hideouts of the IIGs in Bangladesh.

The DG BGB assured his counterpart that there was no IIG camp or hideout inside Bangladesh.

The BSF chief raised the issue of constructing newly-designed single-row fence within the 150 yards of the international border.

In this context, the DG BGB stated that the decision of the Bangladesh government about not building the fence had already been informed to India.

The BGB chief informed the BSF team about the upcoming extensive training and operational flights of two helicopters of the BGB Air Wing in the Chattogram Hill Tracts area and requested the BSF commands to avoid any confusion or misunderstanding in this regard.

Both sides agreed to hold the next DG-level conference at Guwahati, India preferably within the second week of November.

Ain o Salish Kendra data shows that 15 people were killed along the India-Bangladesh border in 2018 while the number jumped to 43 in 2019.

At least 1,185 Bangladeshis were killed along the border by the BSF between 2000 and 2019, according to the data shared by Odhikar.