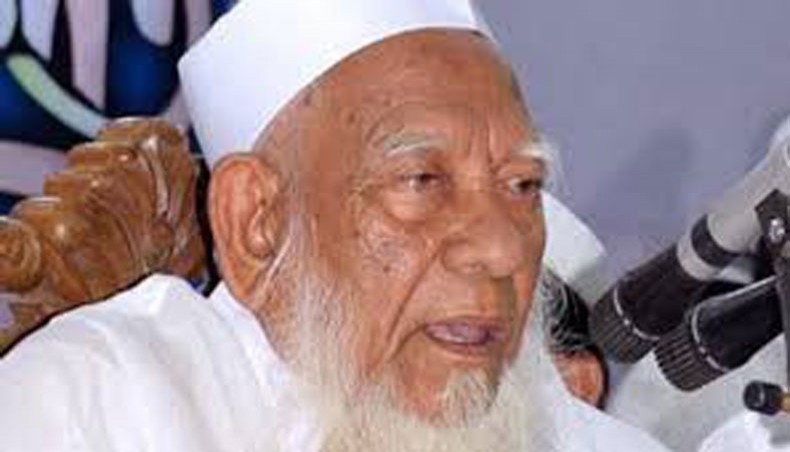 Chief of Hefazat-e-Islam Bangladesh Ahmad Shafi died at a Dhaka Hospital at the age of 103 on Friday.

Shafi was earlier flown to Dhaka after his condition had deteriorated while undergoing treatment at  Chittagong Medical College Hospital.

He died a day after he resigned from his post of director general of Al-Jamiatul Ahlia Darul Ulum Mueenul Islam Madrassah, well-known as Hathazari Madrassah Chattogram, due to student protest.

Shafi had been suffering from old-age complications, blood pressure and breathing difficulties. Due to his illness, he was admitted to different hospitals of Chattogram and Dhaka this year in different times.

Popularly known as Boro Huzur (the eldest scholar), Shafi was the amir of Hefazat-e-Islam, chairman of Bangladesh Qawmi Madrasah Education Board and a faction of the political party Islami Oikya Jote.

Shafi was born in 1916 in Rangunia, Chattogram and received his primary education from his family. Then he joined Al-Jamiatul Arabiatul Islamiah, Ziri and spent five or six months there.

He was admitted to Al-Jamiatul Ahlia Darul Ulum Mueenul Islam in 1926 at the age of 10. In Hathazari Madrassah he studied for 10 years. Then Shafi went to Darul Uloom Deoband for higher studies in the field of Hadith and Tafsir.

He studied there for four years before returning to Bangladesh. During his study time at Darul Uloom Deoband he came close to Shaikh-Ul-Hadidth Maulana Husain Ahmad Madani and later he became his youngest official successor ‘Khalifa’ from the Indian subcontinent.

Hathazari Madrassah accountant Moulana Faridul Alam told New Age that his body would be brought back to the madrassah at night to be kept at the madrassah ground between Fazr prayers and Zuhr prayers for allowing people to see him for the last time.

He said that Shafi’s namaz-e-janaza would be held at the Baitul Atiq Jame Masjid located on Hathazari Madurassah complex and he would be buried at the graveyard in front of the mosque.

In a condolence message, the prime minister said Allama Shafi made important contributions to preaching and expansion of Islamic education in the country.

‘Besides, Allama Shafi played a role in modernisation of Qaumi madrasa education system,’ she said.

Shafi rose to political prominence when he led thousands of madrassah students to stage a sit-in at Dhaka’s Shapla Chattar in 2013 demanding an anti-blasphemy law. The Hefazat-e-Islam rally sought to provide a counterpoint to the Shahbagh movement sparked by the demand for war criminal Abdul Quader Mollah’s death penalty.

The Hefazat-e-Islam rally came to an end when the police forcefully evicted Hefazat activists from Shapla Chattar, killing many.