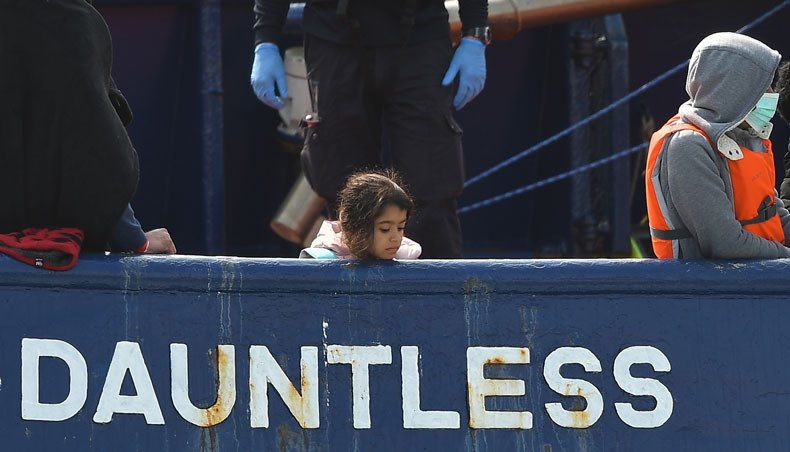 A girl stands on board the DHB Dauntless tug boat as a group of migrants are brought to shore by the UK Border Force after illegally crossing the English Channel from France on a dinghy on September 11, 2020, in the marina at Dover, on the south coast of England. — AFP photo

Migrants who head to the United Kingdom often see it less as a panacea than a last-ditch means-to-an-end, says Matthieu Tardis, an expert in migration policy at the French Institute of International Relations.

Here is a question-and-answer with the specialist:

Is the United Kingdom still an Eldorado for migrants who reach Calais in northern France?

‘Some migrants in Calais have relatives or a community of fellow countrymen or women in the UK. Then there is the English language, which is much more widely spoken than French.

‘But in the autumn of 2016, when the main camp was dismantled in Calais, we saw that when adults were offered housing and when we suspended the Dublin Regulation, a large majority stayed in France. They asked for asylum in France and many got it.’

The EU’s so-called Dublin Regulation stipulates migrants must apply for asylum in the European country where they first arrive — more often than not Italy, Greece and Spain — and will be sent back to that nation if found in another member state.

‘The bad conditions they experience in France, in Italy, in other EU countries, pushes them to go even further, to think that in the UK it will be better.

‘But often, they don’t ask for asylum there as the Dublin Regulation is still valid, so they would be sent back elsewhere in the EU.

‘They remain illegal. The economy is far less regulated than in France, there are more opportunities. It’s a very liberal economy that needs labour that isn’t that well paid, and foreigners typically accept these types of positions.’

Will the EU’s Dublin asylum system be maintained despite Brexit?

‘That will be a big issue that isn’t about to be settled. The British submitted a proposal to the EU regarding a readmission mechanism that would allow them to continue as with Dublin. For the moment, the EU doesn’t want to discuss that, it’s quite a one-sided proposal.

‘The UK is an island and rarely the first port of entry in Europe. In a way, the sea protects it, even if there are more and more crossings.

‘It is definitely easier for the British to negotiate with France on this issue rather than the EU, but it remains to be seen what France would gain from it.

‘The British could also unilaterally decide that EU countries are safe third-party countries but if there is a bilateral convention with France, it will be easier for them.’

So Brexit would have little impact on migrants wishing to cross over?

‘It’s in everyone’s interest to cooperate to avoid tragedies. But in a way, the British have exported their borders onto French territory, like we Europeans do in North African countries or Turkey.

‘France got British funding to secure the tunnel entrance, the port of Calais. Is France going to continue to negotiate in exchange for money? That’s a possibility. That’s been going on for 20 years, bilateral treaties have always played on that.

‘What France should focus on is having legal ways for migrants to get to the United Kingdom. If there are as many crossing attempts, it’s because policy only focuses on securing crossing points.’

One such legal way could be family reunification.