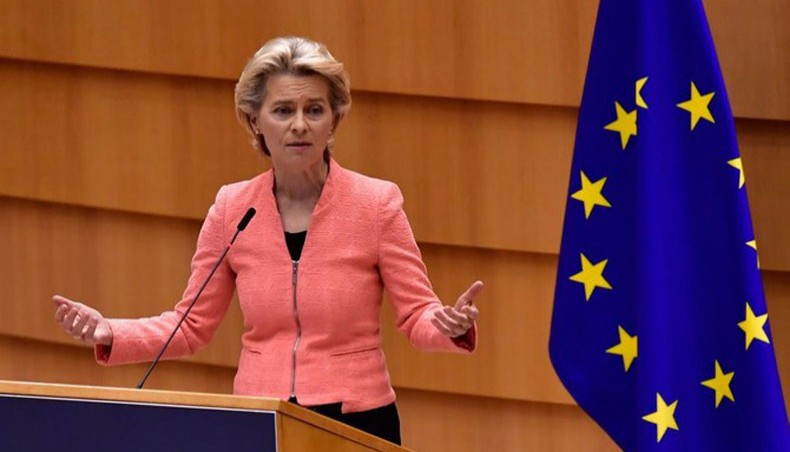 The European Commission’s president on Wednesday urged the EU to stop being naive when dealing with big powers, while singling out Turkey and Russia for criticism.

Ursula von der Leyen, who took over as EU chief last year promising to make the bloc more ‘geopolitical’, said the EU needed to take ‘clear and swift’ foreign policy decisions instead of getting bogged down in internal horse-trading.

She used her annual State of the EU speech to warn Turkey not to bully Greece and Cyprus over energy resources in the eastern Mediterranean.

‘Turkey is and will always be an important neighbour, but while we are close together on the map, the distance between us appears to be growing,’ von der Leyen told the European Parliament.

‘Yes, Turkey is in a troubled neighbourhood. And yes, it is hosting millions of refugees, for which we support them with considerable funding. But none of this is justification for attempts to intimidate its neighbours.’

The three countries have been locked in a row over energy resources and maritime borders in the region, Ankara infuriating the two EU members by sending research ships with naval escorts to work in contested waters.

There have been fears of conflict erupting and Cyprus is pressing the rest of the EU to impose fresh sanctions on Ankara over the drilling.

EU decisions on foreign policy and sanctions are taken by unanimity, which often leads to delays as different countries use the threat of veto to promote their own interests.

Most recently, diplomats said Cyprus was withholding support for sanctions over a crackdown in Belarus to ensure tougher Turkey measures.

Von der Leyen called for a move to majority voting, at least on sanctions – but since this would mean all 27 countries agreeing to give up their veto, it is unlikely to happen.

She said the EU would press ahead with an EU version of the US Magnitsky Act, to impose sanctions on human rights abusers anywhere in the world – a measure already approved by the bloc’s foreign ministers late last year.

EU powers have urged Moscow not to interfere in Belarus, where strongman president Alexander Lukashenko has faced mass protests against his re-election, and von der Leyen said the bloc stood with the country’s people.

‘The people of Belarus must be free to decide their own future for themselves. They are not pieces on someone else’s chess board,’ she said.

And she had a warning for those, like French President Emmanuel Macron, who have said the time has come for a rapprochement with Moscow after years of tensions.

‘To those that advocate closer ties with Russia, I say that the poisoning of Alexei Navalny with an advanced chemical agent is not a one off,’ she said.

‘We have seen the pattern in Georgia and Ukraine, in Syria and Salisbury – and in election meddling around the world. This pattern is not changing.’