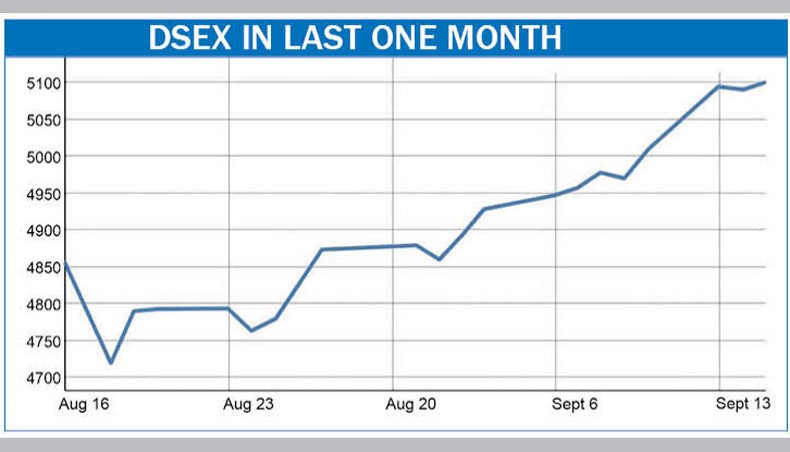 Dhaka stocks gained marginally on Tuesday as a section of investors went for buying shares of insurance, energy and pharmaceutical companies while others booked profits after the recent surges in share prices.

The DSEX gained 240 points in the last 10 sessions with just two negative sessions.

The key index was choppy throughout the session as investors were active on both sides of the trading fence, market operators said.

They said that some investors went for profit booking after a sharp rise in share prices of most of the companies.

Market operators said that the continued rally in share prices lured many investors into investing in the market.

Besides, lower interest rates at banks pushed a group of investors to the capital market to get higher returns, they said.

Funds have been increasing in the financial sector amid record remittance inflow and export earnings.

Moreover, a number of companies which remained short of mandatory 30 per cent joint shareholdings moved to buy shares to comply with the Bangladesh Securities and Exchange Commission rules.

High net-worth investors brought shares of the non-compliant companies to  get directorship in the companies, market operators said.

They said that company directors who fell short of 2 per cent mandatory shareholding were also trying to fulfil the requirement while some investors were also buying shares of those companies to get directorship as per securities rules.

Out of 47 traded insurance companies, 39 advanced and just eight declined on the days.

After being listed on August 24 this year, Express Insurance declared no dividend for the financial year 2019 despite making better profits by the company.

BSEC executive director and spokesperson Rezaul Karim told New Age that the commission held a meeting with officials of the company on Tuesday and asked them about the matter.

The regulator expects that the outcome of the meeting would benefit the investors, he said.

Turnover on the bourse plunged to Tk 995.59 crore on Tuesday compared with that of Tk 1,148.95 crore in the previous trading session.

Beximco Pharmaceuticals led the turnover chart with its shares worth Tk 32.3 crore changing hands on the day.