Govt drafts guidelines to check use of toxic ingredients 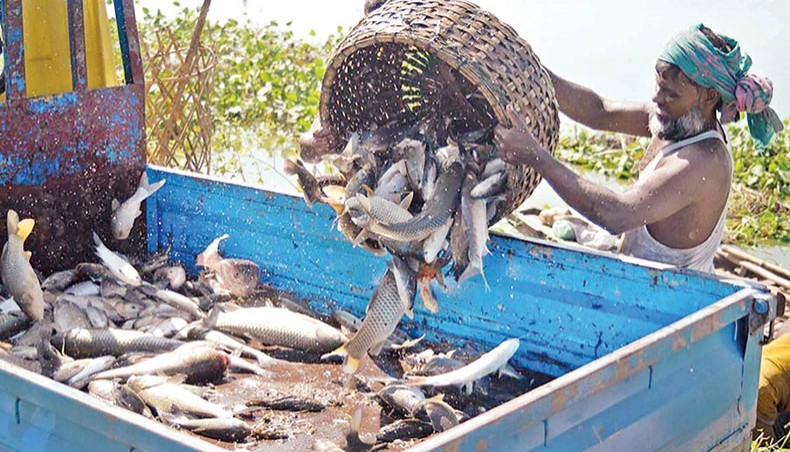 A file photo shows a man putting fish in a pick-up truck at a fish farm. The government has prepared draft guidelines on production and marketing of feed for fish and livestock to keep the supply of fish, meat, egg and milk safe from toxic ingredients, including heavy metals.— Focusbangla photo

The government has prepared draft guidelines on production and marketing of feed for fish and livestock to keep the supply of fish, meat, egg and milk safe from toxic ingredients, including heavy metals.

The fisheries and livestock ministry has prepared the draft titled ‘Fish Feed and Livestock Feed Production and Marketing Management Guidelines-2020’ following a directive the High Court issued to stop using tannery wastes as source of animal protein in feed production.

The ministry has already sought opinions from the various government agencies and other stakeholders on the guidelines.

The guidelines will be finalised after getting feedbacks from the agencies and stakeholders, officials said.

The objectives of the guidelines are to comply with the HC directive, establish a safe food supply chain through maintaining quality and standards in production and marketing of fish and animal feeds and prevent use of prohibited and unapproved ingredients in feed production, they said.

They said that the guidelines would be applicable to feed factories, sellers, feed transporting vehicles, feed packaging and others areas related to sourcing of ingredients for feed and quality control.

The High Court first in 2011 directed the authorities concerned of the government to prepare guidelines to monitor and check the use of hazardous tannery wastes in feed production following a writ petition.

In April 2019, the HC again directed the government to shut down all the poultry and fish feed industries recycling toxic tannery wastes that contain around 30 types of toxic chemicals, including acid, chromium, salt and sodium chloride, to produce and market poultry and fish feeds.

These heavy metals are very harmful to public health as researchers found that these metals could enter human body through fish and meat from feed.

Despite the presence of laws and rules, unscrupulous millers use the tannery wastes as a source of animal protein in producing feed with the help of tannery owners, they said.

So, the ministry has taken the move of framing the guidelines to effectively implement the laws and rules as well as to comply with the HC directive, they added.

According to the draft guidelines, a national committee will be formed headed by the fisheries and livestock secretary to oversee the feed production, import, export, marketing and quality control.

The committee having representation from public and private sectors will also make decisions for ensuring quality of feed in line with rules and regulations.

The DoF and DLS will form separate committees to inspect the feed factories and labs, and examine the licences of the factories, feed production process, source of procurement of animal protein and environment in the factories.

The departments will have the authority to seize all feed in a batch if they find ingredients harmful to the public health as well as to fish and animal health, according to the draft guidelines.

They will also take steps to bring all factories, wholesalers, retailers and agents under licencing system.

The departments will take legal actions against the factories if the presence of tannery wastes and prohibited industrial wastes in any forms in the factories is found.

They will also take legal steps if they find the presence of heavy metals, after examination, in feed and will investigate the source of wastes and metals.

According to the draft guidelines, no factory will produce, import, hoard, transport and market fish feed and animal feed without licence.

Factories will have to deploy skilled manpower to maintain quality of feed.

Feed ingredients must not be kept on floor and should be preserved on a structure above seven centimetres from the floor by factories and sellers.

Sellers should get agency and dealership from licenced producers and importers.

Feed should not be preserved along with pesticides, fertiliser or chemicals.

Sellers will also have to maintain records of procurement and sales of feed and the licence should be displayed at a visible area of shops.