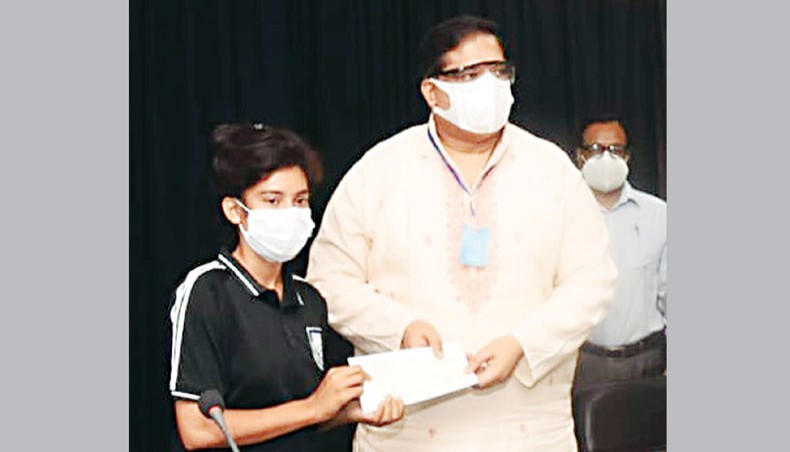 Promising female footballer Unnoti Khatun on Tuesday received a cheque of Tk five lakh as assistance from prime minister Sheikh Hasina.  State minister for youth and sports Zahid Ahsan Russell handed over the cheque to vulnerable footballer on behalf of prime minister in a ceremony held at the National Sports Council auditorium in the city.

The 16-year-old footballer from Jhenaidah, played for Khulna Division in the Bangamata Under-17 Women’s Gold Cup football 2019 where she won player of the tournament award and also finished as top scorer in February.  Hearing the poor status of Unnoti’s family and her mother’s sickness, the prime minister later sanctioned Tk five lakh for the footballer.

‘I am really grateful to the prime minister for helping me and my family. I will try to do my best for the country,’ said Unnoti while receiving the cheque.

She also thanked the sports minister, who handed over another cheque of Tk 24,000 as yearly sports allowance to Unnoti on behalf of Bangabandhu Krirashebi Kalyan Foundation.

Unnoti was also playing for the Nasrin Football Academy in the third edition of the Women’s Football League 2020, which was postponed due to coronavirus in March.