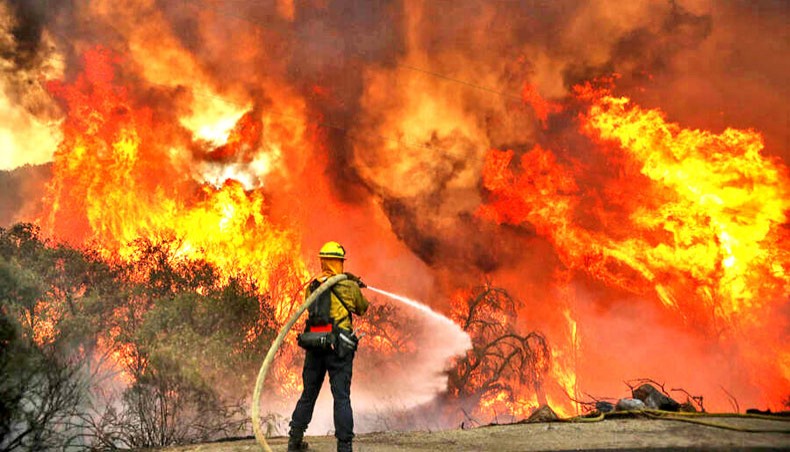 New analysis finds the global north is responsible for 92 per cent of all excess global carbon dioxide emissions while the global south bears the brunt of the devastation, writes Sarah Lazare

THE climate disaster fuelling unprecedented fires across the western United States, threatening to swallow the Marshall Islands into the ocean, and unleashing perennial hunger crises on South Sudan is a global catastrophe. But the global responsibility is not born equally. An analysis published in the September issue of The Lancet: Planetary Health shines new light on the outsized role of the United States, European Union and the global north in creating a climate crisis that, while felt everywhere, is disproportionately harming the global south.

In contrast, the global south — which is by far bearing the brunt of climate droughts, floods, famines, storms, sea level rise and deaths — is responsible for just 8 per cent of excess global carbon dioxide emissions.

While other researchers have calculated countries’ current annual emissions, as well as cumulative historic ones, Hickel tells In These Times ‘none of this tells us how much nations have contributed to emissions in excess of the safe level.’ His methodology starts from ‘the position that the atmosphere is a common resource and that all people should have equal access to it within the safe planetary boundary (defined as 350 parts per million atmospheric concentration of CO2)’, he says.

Hickel calculated the ‘national fair shares of a safe global carbon budget.’ Then he subtracted these fair shares from the historical emissions of countries — ‘territorial emissions from 1850 to 1969, and consumption-based emissions from 1970 to 2015.’ This calculation was then used to determine ‘the extent to which each country has overshot or undershot its fair share’, states the analysis.

‘In other words’, says Hickel, ‘this method allows us to answer the question: “Who got us into this mess?”’

The analysis is meant to not only measure national responsibility for global emissions, but to identify those countries that are colonising the atmosphere. ‘The results show that the countries of the global north have “stolen” a big chunk of the atmospheric fair-shares of poorer countries, and on top of that are responsible for the vast majority of excess emissions’, Hickel explains. ‘In other words’, he adds, ‘they have effectively colonised the global atmospheric commons for the sake of their own industrial growth, and for the sake of maintaining their own high levels of energy consumption.’

The study finds that, in contrast to global north countries, ‘most countries in the global south were within their boundary fair shares, including India and China.’ This is despite the fact that China, with more than four times the population of the United States, is presently the top overall emitter of greenhouse gases, although the United States is the top emitter per capita. According to the analysis, ‘When it comes to climate change, however, what matters is stocks of carbon dioxide in the atmosphere, not annual flows; so responsibility must be measured in terms of each country’s contribution to cumulative historical emissions.’ Yet, the study notes, ‘given that China’s annual emissions are roughly 9 billion tonnes per year, it will soon overshoot its fair share.’

The fact that the United States and global north bear disproportionate responsibility for driving the climate crisis does not let China off the hook for cutting emissions, says Hickel. ‘If China does not reduce emissions, and fast, then we are all doomed’, he underscores. And indeed, climate activists have argued that in order to curb the climate crisis, the United States and China must overcome their confrontational footing and cooperate to dramatically cut emissions.

However, Hickel makes the moral argument that ‘clearly the countries that have contributed the most to excess emissions must cut emissions fastest, with the United States and Europe leading the way. They have a responsibility to get to zero as soon as is physically possible — in a matter of years, not decades. This can be feasibly achieved, and we should all demand it.’

Other studies and analyses have pointed to the disproportionate responsibility of the global north, and wealthy countries, for driving the climate crisis. A study released by Oxfam International in 2015 found that the poorest half of the world’s population — roughly 3.5 billion people — are to blame for just 10% of ‘total global emissions attributed to individual consumption’, yet they ‘live overwhelmingly in the countries most vulnerable to climate change.’ In contrast, the richest 10 per cent of people in the world are responsible for roughly 50 per cent of global emissions.

Yet, even as acute effects of the climate crisis are being felt in the United States, the Republican Party continues to embrace climate denial, and the leadership of the Democratic Party shows reluctance to curb the fossil fuel production driving the crisis — and hostility to radical solutions like the Green New Deal. The United States has contributed only $1 billion to the UN’s Green Climate Fund, meant to help ‘developing countries reduce their greenhouse gas emissions and enhance their ability to respond to climate change’ (former president Barack Obama pledged $3 billion, but president Trump later reneged on $2 billion of it).

Whatever horrific price U.S. residents in the direct path of harmful fires are forced to pay for politicians’ inaction, the costs to the global south will be greater in scale. ‘We know that the global south suffers more than 90 per cent of the costs of climate breakdown, and 98 per cent of the deaths associated with climate breakdown, due to fires, floods, droughts, famine, disease, displacement and so on’, says Hickel. ‘So, just like under colonialism, the North is benefiting at the expense of the South.’

IN These Times, September 14. Sarah Lazare is web editor at In These Times. She comes from a background in independent journalism for publications including The Intercept, The Nation, and Tom Dispatch.