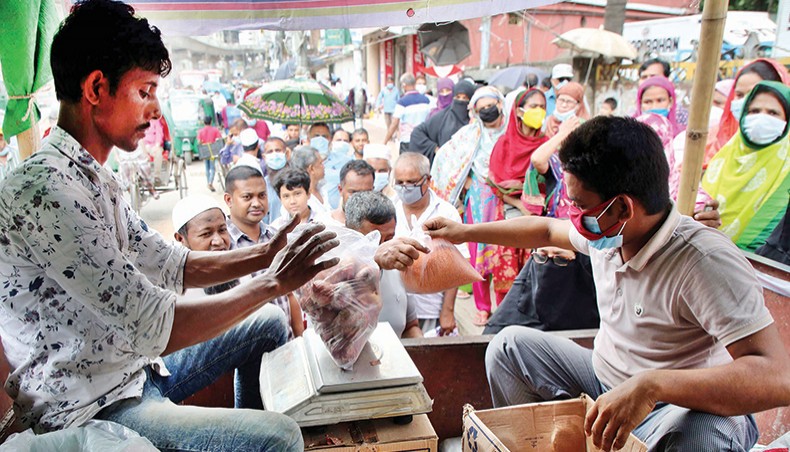 A salesperson weighs onions and another salesperson hands over red lentil to a customer standing in queue at a Trading Corporation of Bangladesh-run open market sales point at Shantinagar in the capital on Sunday. — New Age photo

State-owned Trading Corporation of Bangladesh on Sunday started selling four essential commodities, including onion, at subsidised rates across the country to contain the price spiral of daily essentials on the market.

Following a sharp increase in onion price on the market, the commerce ministry took a decision to start open market sales of the product to avoid the reappearance of last year’s price crisis.

Along with onion, TCB started selling sugar, soya bean oil and red lentil at 275 spots in 62 districts of the country.

The state-owned corporation set the price of onion at Tk 30 a kilogram, soya bean oil at Tk 80 a litre, red lentil at Tk 50 a kilogram and sugar at Tk 50 a kg.

TCB started selling the commodities at 40 spots in Dhaka city and 10 spots in Chattogram city.

In Rangpur, consumers will get the products from TCB at seven spots while the essentials will be sold at five spots each in the other divisional cities.

He said that the open market sales would continue until October 1.

The price of onion has more than doubled to Tk 70 a kilogram on the city markets in the last two weeks along with a surge in the prices of soya bean oil and red lentil on the county’s retail market.

According to TCB data, the local variety of onion was sold for Tk 65 a kg on markets in Dhaka on Sunday, which was 60 per cent higher than the price last year.

The imported variety of onion was sold for Tk 50 a kg, which was 72.73 per cent higher than the price last year.

In Chattogram city, TCB began selling onions at Tk 30 per kg at 10 points along with sugar, red lentil and soya bean oil from noon on Sunday.

Buyers were seen standing in long lines in Jamalkhan to buy TCB onions.

Each customer was sold a maximum of 2 kg of onion at a time.

In Sylhet, TCB started selling OMS of onion at Tk 30 per kg on Sunday to keep the supply and price of onion normal, reports Bangladesh Sangbad Sangstha.

TCB is also selling other essential commodities through OMS in the city.

TCB’s senior regional executive officer Md Ismail said the TCB fixed the price of sugar at Tk 50 per kg, lentil at Tk 50 per kg and soya bean oil at Tk 80 per litre.

A consumer can buy a maximum of two kilograms of sugar, 1 kg of lentil and 5 litres of soya bean oil at a time.