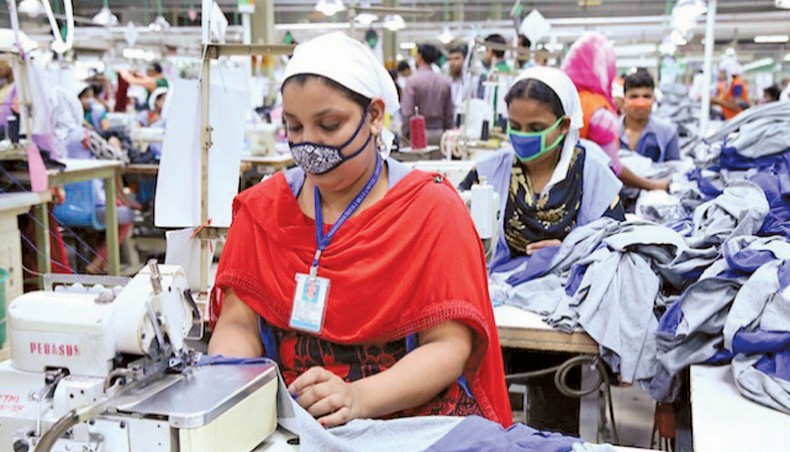 A file photo shows workers sewing clothes at a readymade garment factory in Dhaka. The country’s readymade garment exporters and economists said that they were cautiously optimistic about the positive growth of export earnings in the coming months as Bangladesh was yet to overcome the impact of the coronavirus outbreak. — New Age photo

The country’s readymade garment exporters and economists said that they were cautiously optimistic about the positive growth of export earnings in the coming months as Bangladesh was yet to overcome the impact of the coronavirus outbreak.

Although the world economy is recovering, it might take more time for exports to rebound as the second wave of the pandemic has started causing further damage to businesses in some European countries, they said.

Experts and exporters also said that possibly Bangladesh’s export earnings from RMG would rebound but not in the near term as the second wave of the pandemic had started to create problems on the demand side.

‘We have to explain all the things in a practical way. No doubt the increase in export earnings in the last two months was a positive development but we are still in negative growth,’ Policy Research Institute of Bangladesh executive director Ahsan H Mansur told New Age on Saturday.

He said that orders received in April and May were produced by exporters in June, July and August due to the pandemic.

Mansur said that the world economy was still recovering and they were cautiously optimistic about the rebound in export growth in the coming months.

He, however, thought that it would take time for that to happen until a vaccine came as the second wave of the pandemic was hurting demand in some countries, including the United Kingdom, France and Spain.

He hoped that the world might get a solution to COVID19 in the early part of next year and then exports would pick up.

Bangladesh Garment Manufacturers and Exporters Association former vice-president Mahmud Hasan Khan Babu said that the export earnings might fall in September and October compared to July and August as the buyers had placed 20 per cent less orders than last year.

He said that both orders and prices had fallen due to the pandemic while the second wave of the virus, which had already begun in some EU countries, was affecting Bangladeshi apparel products further.

Bangladesh Knitwear Manufacturers and Exporters Association first vice-president Mohammad Hatem said that it would take time to assess the trend in export as the earnings of the last two months were based on revived orders which were cancelled or halted due to the pandemic.

‘We are worried about global buyers placing orders at slow rates and decreased prices. I do not think the situation will improve in the next three-four months,’ he said.

It will take a few months for a good thing to happen as the second wave of the pandemic has made the buyers more cautious about placing orders, Hatem said.