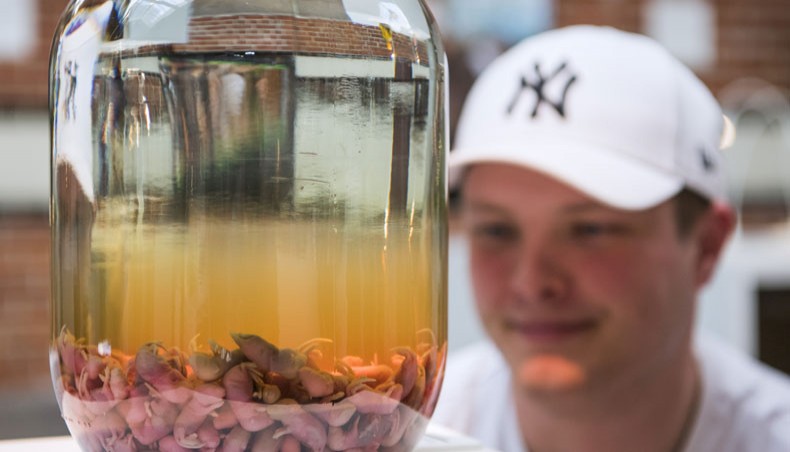 Poop wine and scorpion vodka are just some of the stars of a new exhibit on revolting alcohol at the Disgusting Food Museum in Malmo in Sweden.

A large jug of a yellowish semi-translucent liquid is the centre piece of the new exhibit: wine made from human excrement.

‘This is traditional Korean medicine. This is not something that people drink anymore. It’s an historic drink and it was drunk in order to cure bone breakage and bruises,’ the museum’s director Andreas Ahrens, who prepared the concoction himself, explains to AFP.

He is adamant that ‘now it smells more like alcohol than faeces’, as he removes the cap for a whiff.

‘But when you’re making it, the smell is quite horrendous,’ he admits.

Visitors’ reactions range from gag reflexes to smiles of amusement as they take in the different beverages on display.

Among the pieces on show are both experimental items, like a Scottish beer with a 55-per cent alcohol level sold in a stuffed squirrel, and more widely produced drinks, like Fernet Branca, a bitter, herbal Italian liqueur.

You’ll also find beer made with Icelandic whale testicles, Ugandan Waragi, a strong gin-like beverage, as well as ‘pruno’, a wine made by American prisoners who famously let it ferment in toilets.

Visitors also get a glimpse into cultural differences when it comes to alcohol consumption.

For instance Gammeldansk, a Danish bitter hard alcohol, is considered normal around Scandinavia, ‘but in the rest of the world is considered quite disgusting,’ Ahrens explains.

‘It’s the same with all the other items in the main exhibit. It’s things that people like where it comes from, and might appear disgusting if you’re not from there,’ he says.

Despite its focus on repulsion, the Disgusting Food Museum has seen a growing number of visitors since opening its doors two years ago.

In addition to Malmo it has staged exhibitions in Nantes, Berlin and Los Angeles, but the Covid-19 pandemic health crisis forced it to close for a few weeks due to a lack of visitors.

With the new alcohol exhibition, which will be on display for three months, Ahrens hopes to entice visitors after months of scarcity.