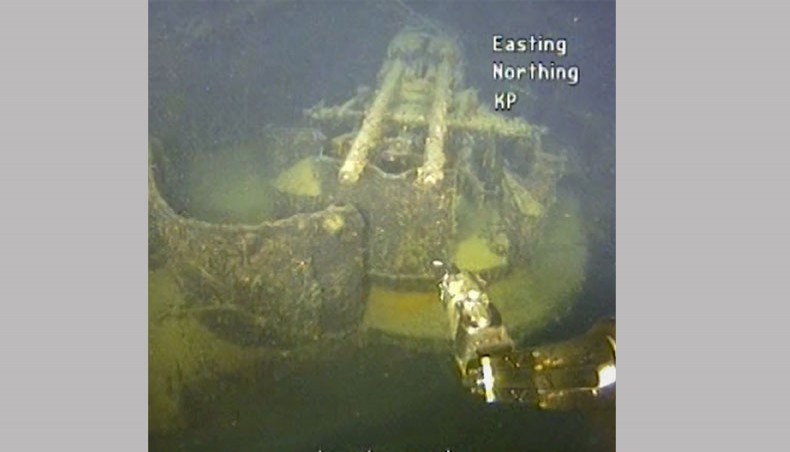 This handout videograb taken from a footage shot on June 30, 2020 and released by Statnett on September 10, 2020, shows the wreck of a Nazi cruiser found 13 naval miles from Kristiansand, Norway. — AFP photo

A World War II Nazi cruiser which was torpedoed and sunk off the coast of Norway in 1940 has been found by chance at a depth of 490 metres during a subsea power cable inspection, the engineers who discovered the wreck said Thursday.

‘Sometimes, we discover historical remains. But I’ve never found anything as exciting as this one,’ Ole Petter Hobberstad, a chief engineer at Norway’s power network operator Statnett, told AFP.

After troops had disembarked on April 9, 1940 the ship was hit by Norwegian artillery then torpedoed by a British submarine. Badly damaged, it was finally ordered sunk by the German captain off the port of Kristiansand, at Norway’s southern tip.

Three years ago, Statnett’s sonars detected an unidentified wreck close to a high-tension cable between Norway and Denmark, but the company’s engineers did not have time to investigate further at the time, Statnett said.

But on June 30, after a storm in the area, a team was sent out to inspect the wreck with a remotely-operated vehicle.

About 15 metres from the underwater cable, the ROV ‘showed a huge shipwreck that was torpedoed. But it was not until the cannons—and Nazi symbol—became visible on the screen that Ole Petter Hobberstad and the crew understood it was from the war,’ Statnett said in a statement.

Norway’s Maritime Museum later confirmed that there was no doubt: the wreck was indeed that of the Karlsruhe, which had never been found.

The sunken ship is located 13 nautical miles off Kristiansand. It lies upright on the seabed, a rare sight for warships with a high centre of gravity which normally list over, according to experts.

Built in Kiel in northern Germany, the cruiser was launched in 1927.