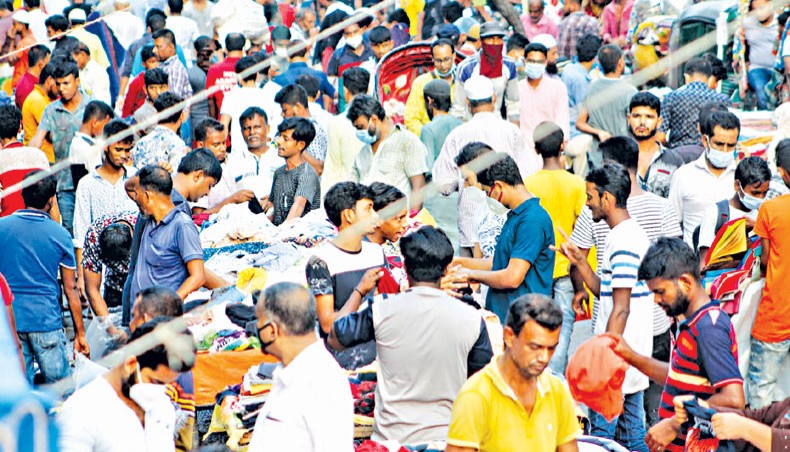 People move without wearing masks and maintaining physical distancing on a Gulistan Road in Dhaka on Thursday amid coronavirus outbreak. — New Age photo

Over 84,000 COVID-19 patients are missing from the record of the Directorate General of Health Services as the health data management is being done in an unorganised manner.

Data, which are crucial for epidemiological analysis, including those necessary for determining area-wise cases, tests and infection rate, also remain unavailable at the DGHS.

The scarcity of data is keeping the government policymakers, researchers and general people in the dark about the country’s COVID-19 situation, experts said.

The implementation of zoning as per the concentration of COVID-19 cases hit a stumbling block due to the absence of organised data, they said.

The DGHS and its affiliate, the Institute of Epidemiology, Disease Control and Research, keep the records of diseases, but their failure to manage data on COVID-19 appears to have impeded the effort in making informed decision, including implementation of COVID-19 zoning.

The DGHS and IEDCR do not have the full lists of patients, their locations and other information, officials said

‘We have no data about them [missing 84,358 cases]. We don’t know where they are from and why they are missing from the database,’ said ABM Shamsuzzaman, in-charge of Health Emergency Operation Centre and Control Room of the DGHS.

This control room has been made recently as the single source of data for journalists by the DGHS director general.

Shamsuzzaman told New Age that he was struggling to supply detailed data when the journalists are asking.

He said that neither he nor any other offices under DGHS has the data about the district-wise cases of COVID-19.

The case positivity rate in particular district or Dhaka city are also missing, he said.

As 94 labs across the   country are testing samples of COVID-19 patients, the DGHS only keeps the compiled records of how many samples were collected and how many of them were tested so far.

Surprisingly, the DGHS does not keep records of how many of the samples were tested positive in the particular lab, Shamsuzzaman confirmed.

‘What we have are the total number of tests, total number of cases, recovery and deaths, the overall rate of infections, fatality rate and recovery rate, but we have no geographic location or time-based data,’ he said.

IEDCR put ‘updates’ on the number of cases in the districts and in the capital every day on its website.

The IEDCR website, updated on September 10, 2020, in its record of the data showed that Dhaka city (excluding Dhaka district area) has 84,829 cases on Thursday.

The number of was the same on the previous updates on Wednesday, which gave an impression that no new patients were detected in the past 24 hours in the capital.

Shamsuzzaman expressed his surprise over non-detection of patients in the past 24 hours.

World Health Organisation former regional adviser Muzaherul Huq said that the country has been plunged into an uncertainty over the COVID-19 epidemic and its future course.

‘We lack data through which we could analyse epidemiologically,’ he said.

‘We don’t know if the tests are being done equitably, what is the actual infection rate and we are not tracing contacts of the cases as many cases are remaining out of communication by the health authorities,’ he said.

Epidemiologist and IEDCR adviser Mushtuq Hussain said that he felt the data should be improved and uploaded on websites of health services regularly.

‘Improved data is crucial for making decision and prediction for any disease including COVID-19,’ he said.

Mushtuq said that the IEDCR was responsible for epidemiological analysis but it was struggling to ‘clean’ the existing data.

‘Many data are incomplete and the IEDCR needs to authenticate and analyse the data,’ he said.

Mushtuq said that the implementation of zoning the country in terms of concentration of COVID-19 patients failed due to lack of data.

The civil surgeons and upazila health officers should streamline the data and then send those to the DGHS and they should upload those data on their respective websites for public to get an idea about the regional situation.