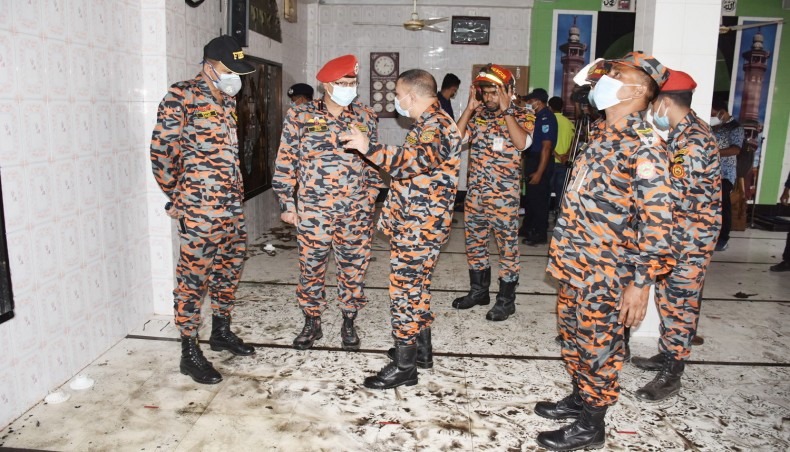 Three more burn victims of the Narayanganj mosque blast died at Sheikh Hasina National Institute of Burn and Plastic Surgery in Dhaka on Thursday, raising the death toll from the blast to 31.

The authorities concerned  relocated the power transformer and the gas pipeline adjacent to the mosque while the district administration’s probe committee extended the report submission time for seven more working days.

Police said that that injured Abdus Sattar, 40, breathed his last around 9:00am while Sheikh Farid, 21, and Nazrul Islam, 40, died around 4:30pm at the hospital from their injuries.

Partha Sankar Pal, residential surgeon of the institute said that Sattar sustained burns on 70 per cent of his body, buns sustained by Farid was 93 per cent and Nazrul 94 per cent.

‘Rest of the five victims are also not out of danger,’ he said, adding that only one of the 37 was released after giving treatment.

Doctors of the hospital said that the death toll could rise.

On Friday night, a blast at the mosque known as Baitus Salat Jame Masjid at Paschim Talla under Fatullah in Narayanganj left around 40 people seriously injured. Of them, 37 were immediately taken to the Dhaka hospital in a critical condition and 31 of them succumbed to their injuries.

Before relocation, the gas line had run along the south-eastern side the mosque and the transformer was set on the eastern side of the mosque.  The government in the meantime had formed several committees to probe the incident.

The district administration-formed probe committee headed by its additional district magistrate Khadiza Tahera Boby on Thursday extended the time for submitting the report as final report submission date had expired on Thursday.

Considering the reality the time was extended, he said.

‘I can ensure you that the report will be made public but how the agencies will implement the recommendations is yet to be discussed,’ he said.

A High Court bench of Justice JBM Hassan and Justice Md Khairul Alam on Wednesday asked Titas Gas Transmission and Distribution Company to make an initial payment of Tk 5 lakh in compensation to each family of 37 people who died or became injured in the explosion.

The court also asked Titas managing director to deposit the money within seven days to the Narayanganj deputy commissioner, who would disburse the amount among the victims’ family members as exigency cost.

The court also asked the authorities concerned and Titas to explain in four weeks why the company should not be directed to compensate each family with Tk 50 lakh.

The locals are blaming negligence of Titas authority, saying that the agency people demanded bribe which the mosque authority refused to pay and as a result the leakages were left unattended.

The mosque management committee complained that the Titas officials claimed Tk 50,000 as bribe when they approached them.

Non-payment of the amount finally led to the blast, locals informed the probe team.