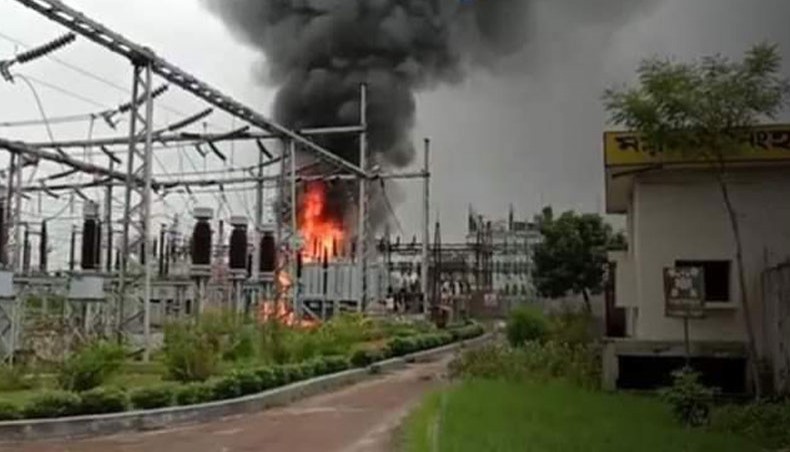 A fire breaks out at the 132/33 kilovolt grid substation in Mymensingh’s Kewatkhali area on Tuesday noon. — New Age Photo

About five lakh electricity consumers remained in dark till Tuesday evening as a fire in a grid substation in Mymensingh’s Kewatkhali area caused power supply disruption in four districts of the division on Tuesday noon.

The fire originated at around 1:15pm in the 132/33 kilovolt substation from a short circuit and later the fire spread to a transformer, said deputy director of Mymensingh Fire Service and Civil Defence Abul Hossain.

Two units of the firefighters brought it under control after an hour’s effort, he said.

Power officials said that about 25 lakh consumers in Mymensingh, Jamalpur, Sherpur and Netrokona faced power cuts immediately after the fire.

PGCB executive director Yakub Elahi Chowdhury told New Age that they restored power supply to about 80 per cent of the affected consumers by Tuesday evening and hoped that the supply to the remaining consumers would be restored on Wednesday.

Officials said that the power supply was restored in Jamalpur, Sherpur and Netrokona while consumers of some part of Mymensingh were facing power cuts.