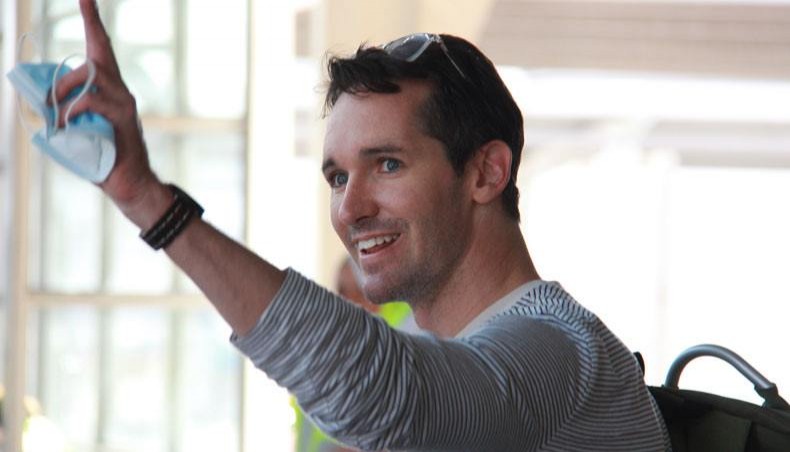 This handout photograph taken and released on September 8, 2020 by ABC News shows Australian broadcasting corporation journalist Bill Birtles waving as he arrives in Sydney after leaving China over arrest fears, amid worsening diplomatic relations between the two countries. — AFP photo

Their dramatic escape came with relations between Beijing and Canberra at their lowest point in decades, over issues ranging from China’s role in the coronavirus pandemic to trade and the pro-democracy movement in Hong Kong.

Bill Birtles and Michael Smith had secretly taken refuge at Australian diplomatic missions in China for several tense days until deals were struck to allow their safe return.

Landing in Sydney on Tuesday, Birtles — Beijing correspondent for public broadcaster ABC — recounted a ‘whirlwind’ week of political maneuvering, but said: ‘it’s a relief to be back in a country with genuine rule of law.’

Both Birtles and Smith — Shanghai correspondent for the Australian Financial Review — received simultaneous midnight police raids on their homes last week and a warning they would have to answer questions about a ‘national security case’, their employers said.

Banned from leaving the country and fearful of interrogation and arrest, the journalists fled to their closest Australian diplomatic missions until an agreement brokered by the Australian government allowed them to answer police questions safely.

The pair flew out of Shanghai accompanied by Australian diplomats on Monday and arrived in Sydney early Tuesday.

They are just the latest in a string of foreign journalists to be barred, detained or pushed out of China —as the Communist Party targets journalists mostly from the United States and Australia.

Beijing’s security services earlier this month detained another Australian journalist working for its state-run CGTN TV. Several reporters for US media have had their visas revoked and been forced to leave the country.

State department spokeswoman Morgan Ortagus said Tuesday that China was ‘threatening, harassing, and expelling US and other foreign journalists’ after Beijing refused to renew press credentials for several employees of US media organisations.

The Australian Financial Review’s editors insisted the two Australian journalists ‘were going about their normal reporting duties’ and described the incident as ‘regrettable and disturbing’ and ‘not in the interests of a co-operative relationship between Australia and China’.

James Curran, an Australian former intelligence analyst and prime ministerial adviser, told AFP the media crackdown and the fact no major Australian media were now represented in China would only narrow public understanding.

‘The lens through which we are going to get a picture of this country is going to become increasingly shrouded, if not blocked altogether,’ he said.

He added that the incident was another severe blow to rapidly deteriorating relations between Australia and China.

In recent years, Australia has increasingly pushed back against what it sees as China’s more aggressive projection of power and influence across Asia since president Xi Jinping took power in 2013.

Curran said the problems stem from Xi’s pursuit ‘a very aggressive form of Chinese exceptionalism’, with nationalism increasingly being used as ‘the glue holding the country together’.

‘They just seem to be taking the view that as a rising power they should be able to flex their strategic, ideological and rhetorical muscle, and that other countries are just going to have to put up with it.’

Beijing was particularly infuriated by Australia’s leading role in international calls earlier this year for an investigation into the origins of the coronavirus pandemic, which began in the Chinese city of Wuhan.

A Chinese envoy in Canberra recently described Australia’s behaviour as a betrayal that caused ‘indignation, anger and frustration’ in China.

Since then, China has taken steps to curb key Australian imports and encouraged Chinese students and tourists to avoid the country.

The lucrative trade in Australian iron ore, which is vital to both economies, has so far emerged unscathed.

Cheng is the second high-profile Australian citizen to be detained in Beijing after writer Yang Hengjun was arrested in January 2019 on suspicion of espionage.

Australia earlier this year warned its citizens they faced the risk of arbitrary detention in China.