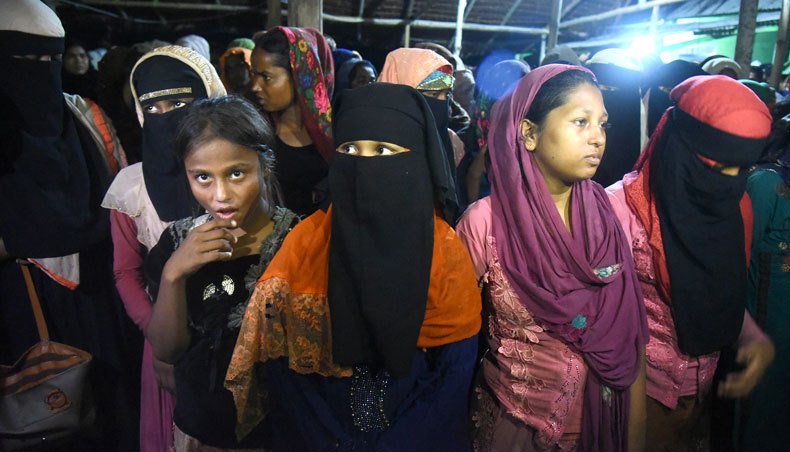 Rohingya migrants look on following their arrival by boat in Lhokseumawe, Aceh on September 7, 2020. — AFP photo

Nearly 300 Rohingya migrants reached Indonesia on Monday claiming to have been at sea for seven months, the United Nations refugee agency said, in one of the biggest such landings by the persecuted Myanmar minority in years.

The migrants — including more than a dozen children — were spotted on a wooden boat by locals who helped them land near Lhokseumawe city on Sumatra’s northern coast, officials said.

But as many as 30 may have died during the perilous high-seas voyage, the UN said, adding that the group left from Cox’s Bazar in Bangladesh in February.

Around one million Muslim Rohingya live in cramped and squalid refugee camps in Bangladesh — next to their native Myanmar — where human traffickers run lucrative operations promising to find them sanctuary abroad.

Muslim-majority Indonesia and neighbouring Malaysia are favoured destinations for the minority group after many fled following a military crackdown in Myanmar three years ago.

‘Having survived some seven months at sea in desperate conditions, an unknown number are in need of medical attention,’ said UNHCR, citing survivor accounts.

‘Over 30 are estimated to have died en route.’

Chris Lewa, director of the Arakan Project — an NGO that focuses on the Rohingya crisis — said the migrants may have been held at sea while traffickers extorted money from their families.

‘These people were actually kept hostage,’ she said.

‘They (the traffickers) said they wouldn’t disembark until we’re paid.’

But she added: ‘We don’t really know the full story yet.’

At least one member of the group — which included 102 men, 181 women and 14 children — was ill and had to be rushed to a local hospital for treatment, said the area’s military chief Roni Mahendra.

Images from Lhokseumawe showed migrants sitting on the ground in a makeshift building with their meagre possessions.

Locals had donated food and clothing.

‘They need help in the name of humanity... They’re human beings like us.’

Amnesty International called on Indonesia to give the migrants safe haven.

‘Their testimonies, once again, show how perilous these boat journeys can be.’

The long-persecuted Rohingya are widely regarded as illegal immigrants in Myanmar, refused citizenship and unable to travel freely.

Military operations in 2017 forced some 7,50,000 Rohingya to flee from conflict-torn Rakhine state to Bangladesh in violence that now sees Myanmar facing genocide charges at the UN’s top court.

The landing on Monday comes after about 100 Rohingya, mostly women and children, arrived in the same area in June.

They described a harrowing four-month journey that saw them beaten by traffickers and forced to drink their own urine to stay alive.

Both groups that came ashore in June — and the latest arrivals — may have been part of an estimated 800 Rohingya who reportedly left Bangladesh earlier this year, said the Arakan Project’s Lewa.

‘The big question is whether all of them have now come ashore or if any are still at sea.’

She described the Monday landing as the biggest since 2015.

Hundreds of Rohingya have been pushed back by Malaysian and Thai authorities during the coronavirus pandemic, Lewa added.

‘Their hazardous ordeal has been prolonged by the collective unwillingness of states to act for more than six months,’ UNHCR said.

‘UNHCR and others have repeatedly warned of dire consequences if refugees at sea are not permitted to land in a safe and expedient manner.

‘Ultimately, inaction over the past six months has been fatal.’