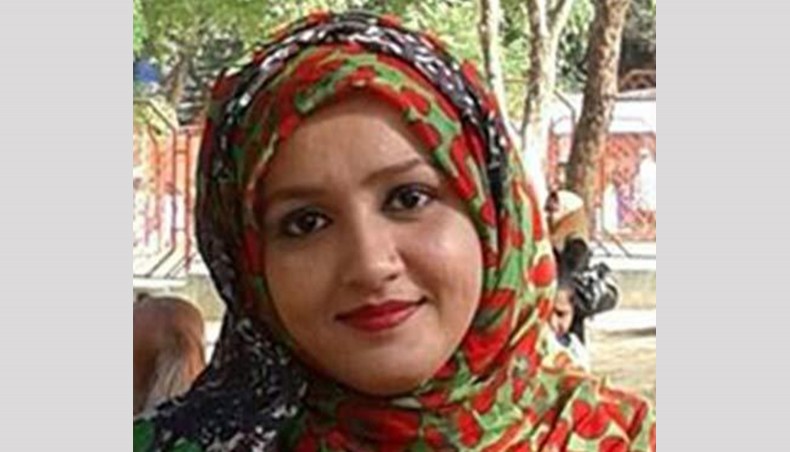 The Police Bureau of Investigation on Sunday began a visible investigation into the murder case of Mahmuda Khanam Mitu, wife of former superintendent of police Babul Akter, in Chattogram.

Chattogram metropolitan magistrate Shafi Uddin on Sunday remanded suspect Shahjahan Mia in the bureau custody for two days for interrogation in the case.

The court passed the order after hearing a petition filed by the new investigation officer, bureau additional deputy commissioner Md Moin Uddin seeking the suspects in custody for five days for interrogation.

The case was transferred to the bureau from the Chattogram Metropolitan Police in February following a court order.

Mitu was stabbed and shot to death on June 5, 2016 when she was walking her son to his school bus stop at the port city’s GEC intersection.

After the murder, Babul filed a case against three unidentified men with Panchlaish police station.

The victim’s father is frustrated over the handling of the case. He said that they did not even know about the transfer of the case to the bureau.

Bureau additional deputy commissioner (Chattogram metro unit) Moin Uddin said that they would soon appeal to the court for interrogating plaintiff Babul Akter also and they could not interrogate anyone earlier because of COVID-19 pandemic.

‘We obtained the case documents in February, soon before the pandemic started,’ he said.

Earlier, immediate past investigation officer for the case Mohammed Kamruzzaman, metropolitan police additio0nal deputy commissioner, said that they had almost completed their investigation when the case was shifted to the bureau.

Mitu’s father Mosharraf Hossain said, ‘We did not appeal for the transfer of the case. We came to learn about the transfer from newspaper reports. After the PBI got the case it did not even contact us in last five months.’

Terming the whole state of the things ‘unsatisfactory’, he said, ‘It is clear that Babul is responsible for the murder. There is a phone call from Babul to the accused the record of which went viral. The PBI is good but everything depends on the investigation officer. If the department acts sincerely then it is satisfactory. The PBI can make progresses through a fair investigation.’

He said, ‘We could not contact Babul though we tried hundreds of times. Relatives said that Babul shifted his residence from Moghbazar to Mohammadpur. From the beginning he did not allow the kids to contact their grandparents.’

He said that even after four years of investigation, officials have failed to identify the whereabouts of the prime accused, police informer Kamrul Islam Musa alias Musa Sikdar, who reportedly led the mission to kill Mitu in front of her child.

Kamrul acted as an informer for Babul, who admitted this during his statement on December 27, 2017 at the CMP headquarters.

Motaleb and Anwar have made statements before a court, implicating seven persons, including Musa, who, according to the two, directly took part in the killing.

Of the accused, Nurul Islam Rashed and Nur Nabi, whose names were mentioned by Motaleb and Anwar, were killed in gunfights with police in July, 2016 in Chattogram while Musa and another accused Kalu are still on the run.

Besides, two others — Md Shazaman alias Robin and Abu Nasar Gunnu — were arrested in connection with the killing but their involvement could not be substantiated.

Bhola, who reportedly supplied firearms for the murder, walked out of jail after securing bail from the High Court in December, 2019.

Although police said that Musa was on the run, his wife Panna Akhter claimed that plainclothes police detained him and his brother Shakur in the port city’s Bandar area on June 22, 2016.

But, only Shakur was later shown arrested in the case. Police officials said that they only managed to catch Shakur.

On June 25, Babul was picked up and interrogated in police custody for 15 hours. He was relieved from his job on September 6 that year. He now works at a private company.

Babul could not be contacted for comments after repeated attempts.