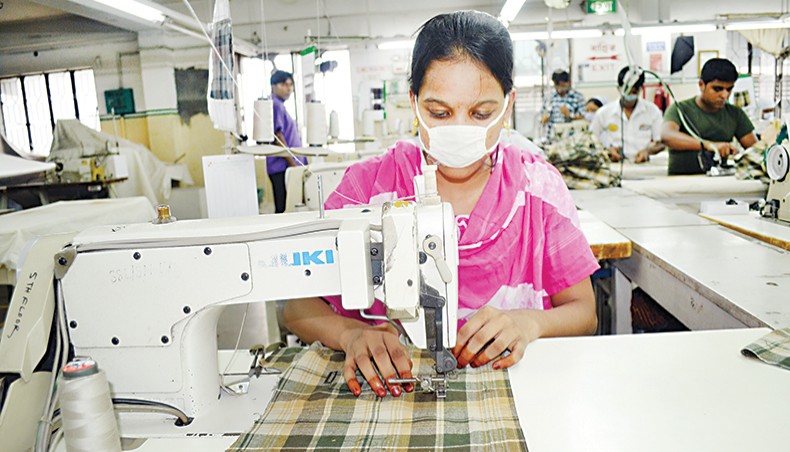 A file photo shows workers wearing masks sewing clothes at a factory on the outskirts of Dhaka. The country’s apparel export to the United States in January-July this year fell by 18.54 per cent due to the global economic slowdown witnessed in the wake of the coronavirus pandemic. — New Age photo

The country’s apparel export to the United States in January-July this year fell by 18.54 per cent due to the global economic slowdown witnessed in the wake of the coronavirus pandemic.

The US official data showed that Bangladesh’s apparel export to the US market in the first seven months of 2020 plunged by $661 million to $2.90 billion from $3.56 billion in the same period last year.

Exporters said that although earnings from the US increased slightly in July, the data reflected the adverse impacts of the pandemic in April-June.

Bangladesh still remained the third largest apparel supplier to the US market but the rate of negative growth registered by the country was higher than its competitor country Vietnam, according to the data of the Office of Textiles and Apparel under the US Department of Commerce.

Despite sluggish demand for apparel in the US, Cambodia’s export registered a 6.13-per cent positive growth on the market during the period.

It showed that Bangladesh’s readymade garment export to the US, the largest market for Bangladesh, had started to decline since April and the earnings witnessed a 12.10per cent negative growth in the January-May period.

Bangladesh’s RMG export to the market also decreased by 19.73 per cent in the first half of the current calendar year.

The impact of the coronavirus pandemic on Bangladesh’s apparel export was reflected in the US import data but the rate of negative growth would fall in the coming days as the US consumers had started buying again, Bangladesh Knitwear Manufacturers and Exporters Association first vicepresident Mohammad Hatem told New Age.

He said that export to the US increased in July but Bangladesh had been failing to gain the expected market share in the US due to many issues.

During the pandemic, the rate of negative growth registered by Vietnam in the US was lower than Bangladesh as Vietnam enjoys a competitive duty structure and lead time advantage on the market, Hatem said.

He hoped that the export growth of Bangladesh’s RMG sector would return to a positive on the US market by the end of this year.