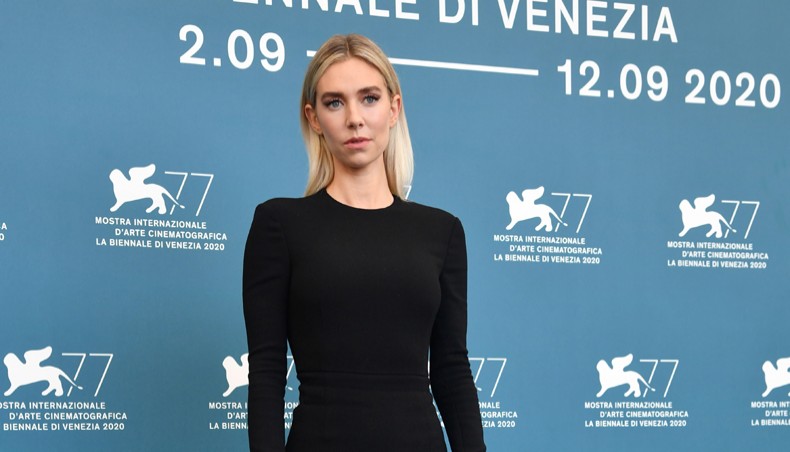 ‘The Crown’ star Vanessa Kirby said Saturday that her latest role as a woman who loses her child after a home birth goes wrong was her scariest yet.

The British actress plays alongside Hollywood star Shia LaBeouf in ‘Pieces of a Woman’, which is premiering at the Venice film festival.

It opens with a 25-minute-long birth scene which was shot in one take by Hungarian director Kornel Mundruczo and written by his longtime partner Kata Weber.

‘My wife and I wanted to share one of our most personal experiences with audiences through a story of an unborn child, with the faith that art can be the best medicine for pain,’ Mundruczo said.

The film is one of a series of deeply personal films competing for the Golden Lion top prize.

Kirby, 32, said trying to be true to the suffering of the women she talked to before the shoot was ‘really scary’.

But she threw herself ‘really deep’ into her first lead role in a movie in a way she hasn’t since she made her name playing Princess Margaret, sister of Britain’s Elizabeth II, in the hit Netflix series.

Mundruczo admitted that making a film ‘about how you lost your baby’ wasn’t the most commercial idea he has ever pitched.

But the acclaimed director said dealing with such searing grief, which is also tied up with the trauma of the Holocaust in the character’s family, was universal.

‘Loss steps beyond the boundaries of understanding or control for all of us, but comes with the ability to be reborn,’ he added.

Both Mundruczo -- best known for his 2014 Cannes prize winner ‘White God’ -- and Weber wore T-shirts declaring #FreeSZFE to support students who are occupying Budapest University of Theatre and Film Arts after the country’s prime minister Viktor Orban appointed one of his supporters as its head.

Orban’s critics have taken to the streets to support the students and say it is the latest bid by his nationalist government to wrest power from institutions it sees as left-leaning.

Mundruczo said he supported the students’ defence of the university’s independence.

Earlier he told reporters that he had moved to Berlin more than a year ago because ‘the pressure is growing on free art’ under Orban, who has been in power for more than a decade.

‘My country started to be a little strange,’ he added.

Another hugely autobiographical film making headlines at Venice is Italy’s ‘Padrenostro’ (Our Father) by Claudio Noce, which is inspired by a terrorist attack on his police commissioner father when the director was two.

His father survived the assassination attempt in 1976 by the left-wing Armed Proletarian Nuclei (NAP), and the film focuses on the after-effects on a family of a similar horror seen through the eyes of a 10-year-old boy.

‘One of the reasons why I wanted to do this film was to try to overcome this fear,’ Noce told reporters.

‘Certainly it was painful. The idea of making a film... on what had happened to my family, to my father particularly, had been living with me for a long time,’ he added.

Italy was wracked by two decades of domestic terrorism from the late 1960s in what became known as the ‘Years of Lead’.