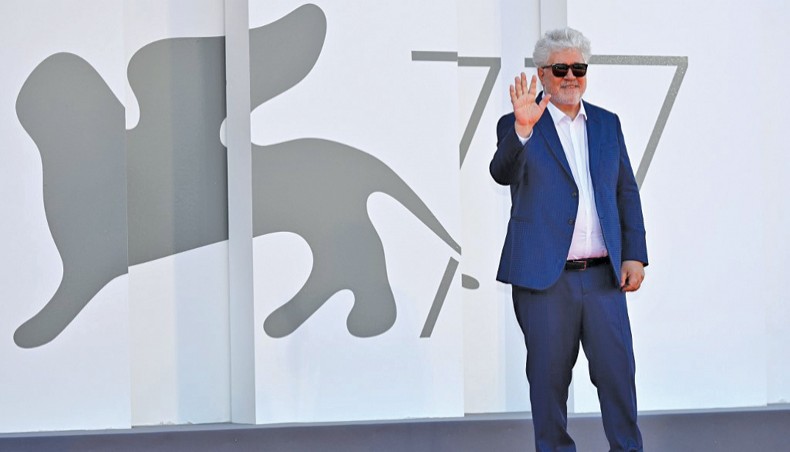 Spanish director Pedro Almodovar arrives for the screening of the film ‘The Human Voice’ at 77th Venice Film Festival, on September 3, 2020. — AFP photo

Legendary Spanish director Pedro Almodovar said Thursday that he is working on a western, a surprising career turn for the master of female-friendly melodrama who made his name with ‘Women on the Verge of a Nervous Breakdown’.

The Oscar winner told reporters at the Venice film festival that he has written the cowboy flick, but that it was ‘a different kind of western, which will be very colourful... very theatrical.’

Spaghetti westerns made by Italian directors like the late Sergio Leone became a phenomenon in the 1960s, with many shot in Spain’s dry southeastern Almeria region.

Almodovar premiered his latest film, ‘The Human Voice’ at Venice Thursday, with British actress Tilda Swinton in the lead as a desperate and vengeful woman waiting for her estranged lover to ring her.

Shot last month, the 30-minute film is his first shot in English and is very freely adapted from Jean Cocteau’s classic play.

The 70-year-old director admitted that the play and its theme of the jilted lover waiting on a ‘call that will never come’ was close to his heart.

‘It is happened to me,’ he told a press conference, and said that characters hanging on a telephone call was a thread that ran through a lot of his own work.

Almodovar also claimed that he has started moving in a new more austere direction since his 2016 film ‘Julieta’.

‘I am working towards a leaner narrative with fewer elements, which I analyse very deeply,’ insisted the director once famous for his visual and emotional flamboyance.

‘The experience of sobriety and austerity accompanied me also in ‘Pain And Glory’,’ his last and hugely autobiographical film, where Antonio Banderas played a film director suffering from chronic back pain, as Almodovar also does.

He said he is hoping to start his next feature, ‘Madres Paralelas’ in October and then make the western and another film called ‘A Manual for Cleaning Women’.