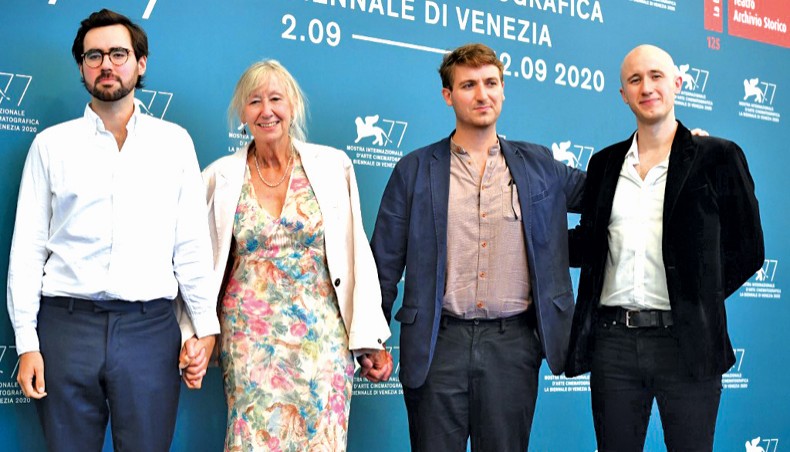 A ‘vanishingly small number’ of Germans were unaware the Holocaust was going on during World War II, the makers of a chilling new documentary said Thursday.

The acclaimed British director Luke Holland interviewed more than 300 elderly Germans and Austrians, including many former SS members, for ‘Final Account’, which is being premiered at the Venice film festival.

Holland, who died in June, spent more than a decade befriending former Nazis and persuading them to talk about what they knew for his monumental work, which drew prolonged applause from critics.

The Hollywood Reporter praised the film as ‘exceptional’ and said it may be the last chance to hear from ‘active participants in the horrors of the concentration camps’.

Producer Sam Pope said the remarkable testimony Holland gathered was because he spent years gaining the trust of his subjects.

While many struggled with their consciences, others were unrepentant and proud of serving in the SS ‘where you could rely on every man 100 percent’.

Others denied the Holocausts while openly admitting they knew about massacres. ‘Don’t blame Hitler,’ one said. ‘The idea was correct... (but the Jews) should have been driven out of the country’ rather than killed.

But Pope said the interviews with non-combatants, particularly women, gave the lie to the idea that few ordinary people in Germany and Austria knew what was going on.

‘A common refrain was that it was after the war that we learned of these horrible crimes,’ the producer told reporters.

‘In the process of these interviews I think that as a possibility becomes vanishingly small.

‘Even if you weren’t there or didn’t participate you knew someone, or had heard a rumour. Your brother who was a soldier came home and told you stories,’ said Pope.

Yet one of the film’s most chilling scenes comes from modern Germany, when an elderly former SS soldier is shouted down by young neo-Nazis for making them feel ‘ashamed to be German’ by talking about his guilt.

The long emotional exchange happens around the table in Wannsee House, the stately home in a Berlin suburb where the Final Solution -- the deportation and extermination of all Jews in German-occupied territory -- was drawn up.

With far-right activists trying to storm the Reichstag building in Berlin which houses the German parliament at the weekend, the lessons from history are clear, Pope said.

‘These powerful and vicious ideologies are still present and gaining strength, not just in Germany and Austria but around the world.’

In his epigraph for the film, Holland -- who grew up speaking German and whose mother’s family perished in the Holocaust -- refused to damn his subjects, most of whom were in their 90s.

‘Perpetrators are not born, they are made,’ he wrote.

Yet he did not pull away from asking the hard questions of men and women he had befriended.

Co-producer Riete Oord said it was clear many knew exactly what was going on ‘but they repressed it. There is a guy who says, ‘If 99 people in front of me thought it as OK to slaughter Jews, I would go with it too.’ The abnormal becomes very normal in such circumstances.’

The documentary is being premiered in Venice on the same day as a powerful drama about the massacres of more than 8,000 Bosnian Muslim men and boys by Serb forces at Srebrenica in 1995.

‘Quo Vadis, Aida?’, which paints an unsparing picture of how Dutch UN peacekeepers handed the civilians over to general Ratko Mladic, also got a long ovation from critics.

Mladic is currently appealing his conviction for genocide at a tribunal in The Hague.