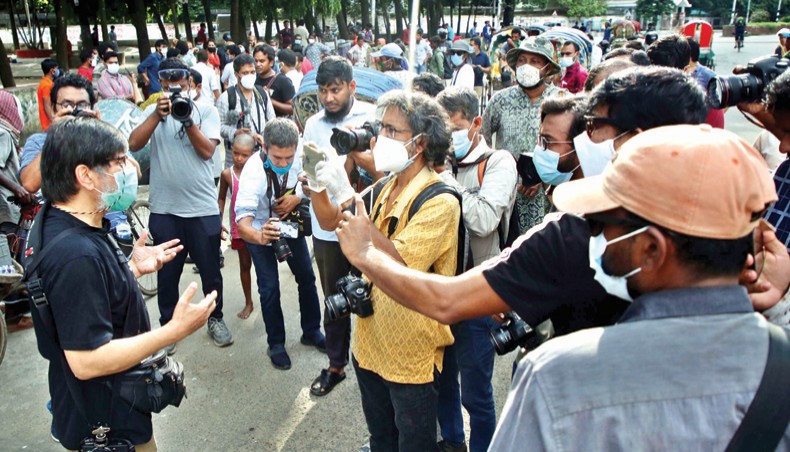 Drik on Friday observed its 31st founding anniversary by holding a photo exhibition and other programmes protesting against extrajudicial killings across the country.

As part of the programmes, Drik members and participants took position at Dhaka University Teachers-Students Centre holding photographs of Shahidul Alam that were showcased in the acclaimed photographer’s 2010 exhibition titled ‘Crossfire’, said a press release issued by Drik.

Two new photographs — one of Teknaf ward councillor Ekramul Haque and the other of retired major Sinha Mohammad Rashed Khan — were added to the exhibition, said the release.

Records of news items on crossfires broadcast by television channels, an excerpt from the army chief’s recent press conference and the phone conversation between Ekramul Haque and his family members before his death were played at the programme.

A group of performers pretended to be killed and fell on the ground with the sound of gunshots in the background, it added.

Prior to the performance, Drik managing director Shahidul Alam said that the institution from its inception was involved in the struggle for the positive transformation of society and for the establishment of democracy in the country.

He said that Drik would continue its struggle.

‘When I held an exhibition on crossfire in 2010, I didn’t think that it would become a part of the political and economic system after 10 years,’ he said and added that he never thought that people would have to beg for his life and exemption from crossfire in exchange of a ransom of Tk 5 lakh to Tk 50 lakh by ignoring higher courts.

He urged all to continue struggle and remain vocal for saving the country from such anarchies.