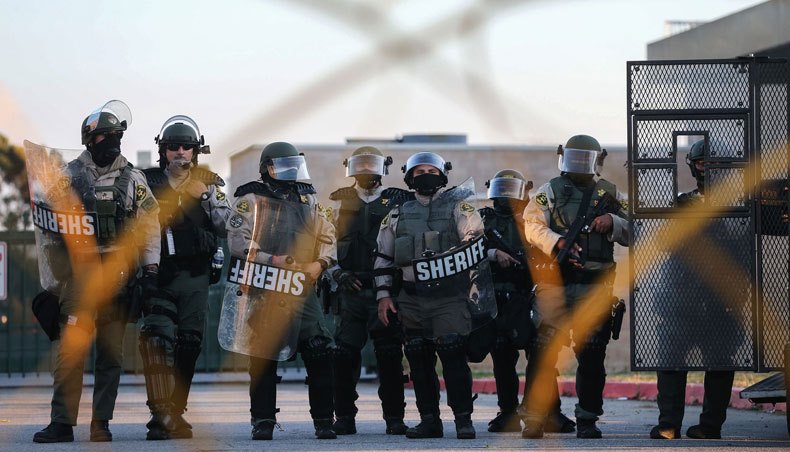 Los Angeles sheriff’s deputies keep watch at the South Los Angeles Sheriffs’ station as protesters demonstrate nearby against the death of Dijon Kizzee, a 29-year-old black man who was shot and killed by police, on September 1, 2020 in Los Angeles, California. — AFP photo

Police shot dead an African-American man in the United States capital Washington on Wednesday, the force said, in the latest of a slew of police killings of black men and women that had sparked nationwide uproar.

The man, said to be aged 18, was shot in the southeast of the city as officers were following up on a tip about guns allegedly stashed in a vehicle.

‘When they approached the vehicle, some of the folks of the vehicle fled on foot. One of the officers discharged their firearm,’ Washington police chief Peter Newsham told a news conference.

‘We have what we believe to be an adult male that was taken to a local hospital and pronounced dead,’ he added.

He said that officers seized two guns from what he described as the ‘scene of the crime.’

The shooting came after months of protests against police brutality across the country, and just two days after officers in Los Angeles shot dead an African-American man who was riding his bike when police tried to stop him.

A local council member Trayon White told news channel WUSA9 that he had spoken with the mother of the man killed in Washington.

‘We’ve seen this narrative too many times in America, and now it’s hitting home,’ he said. ‘I talked to his mom about 15 minutes ago and we want to figure out what’s on the body camera footage, to figure out if he was running away why was he shot.’

‘We don’t know a lot about the situation. But, in my mind, there are very few reasons for a 17-year-old or 18-year-old young boy to be killed in our city, especially if this man was unarmed or if he was fleeing,’ he added.