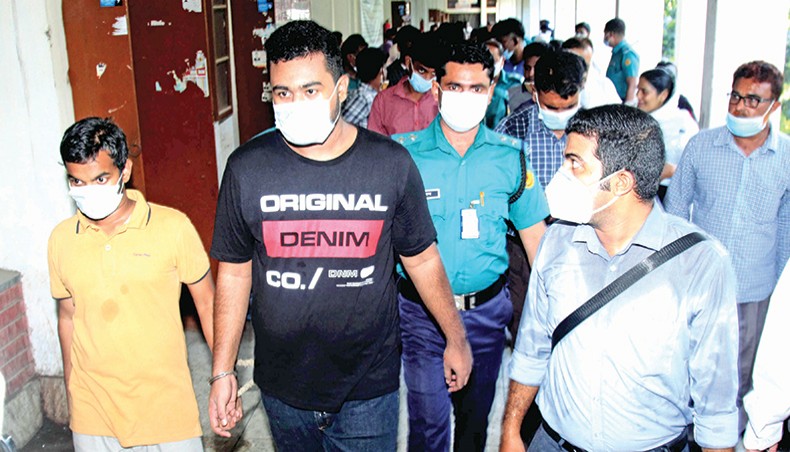 Police take the accused in the murder case of Bangladesh University of Engineering and Technology student Abrar Fahad to Speedy Trial Tribunal-1 of Dhaka which on Tuesday set September 9 to continue rest of the hearing for framing charges. — New Age photo

A tribunal in Dhaka on Wednesday began framing of charges against 25 suspects over the murder of Bangladesh University of Engineering and Technology student Abrar Fahad in October 2019.

Judge Abu Zafar Md Kamruzzaman of the Speedy Trial Tribunal-1 of Dhaka also set on September 9 for next hearing to complete the charge framing.

Public prosecutor Mosharraf Hossain Kajal argued that as the accused had killed an innocent person and brilliant student Abrar they should get highest punishment for the offence.

A defence lawyer argued that there as there was no hard evidence that proved that the suspects had beaten Abrar for killing thus there was no reason to prosecute the accused under Section 302 and they should be discharged.

One of the lawyers Md Mahabub Ahammad said that they tortured the victim but they did not want to kill him.

Earlier, the tribunal directed the jail authorities to produce all the 22 accused, now in judicial custody.

Abrar, a second-year student of electrical and electronic engineering department of BUET, died after he had allegedly been tortured by some Bangladesh Chhatra League leaders at Sher-e-Bangla Hall of the university in the early hours of October 7, 2019.

Later, his father filed a case with Chawkbazar Police Station against 19 BUET students. The incident triggered a firestorm of protests on campuses across the country.

Many took to social media to demand justice for Abrar.

On November 13, 2019, detectives submitted a 105-page chargesheet against 25 BUET students in connection with the murder.

Of them, 22 were held, but three other are still absconding.