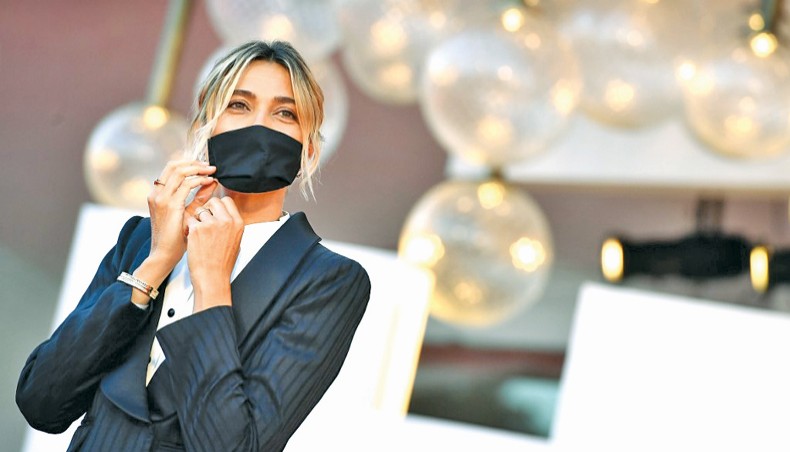 Master of Ceremonies and sponsor of the 77th Venice Film Festival, Italian actress Anna Foglietta wears a face mask as she poses during a photocall on the red carpet outside the festival’s palace, on the eve of the festival’s opening, on September 1, 2020 at Venice Lido. — AFP photo

The Venice Film Festival opened on Wednesday with strict safety measures in place for the industry’s first international competition since the coronavirus hit, with 18 films vying to grab the top prize and help movie buffs forget the pandemic for a while.

At Wednesday’s opening film, ‘Lacci’ by Italian director Daniele Luchetti, the theatre was just half full with journalists, whose temperatures were taken before being allowed inside.

On the eve of the annual high-profile competition on the Lido, dozens of red safety signs were unloaded and installed throughout the venue attested to the peculiarity of this year’s event.

The sound of drills pierced the warm beach-front air as workers went about their last-minute preparations and journalists -- all in masks -- wandered the freshly laid red carpet, their festival badges suspended from their necks.

‘This year in Venice, they’ve confused the festival with the Carnival. We’re at a masked ball,’ one Italian journalist quipped to his colleagues.

One exception was Festival Director Alberto Barbera, tanned and mask-free, as he gave interviews on the red carpet about the importance of this year’s festival.

‘I’m excited and I’m a little bit anxious,’ acknowledged Barbera, neatly turned out in a pressed blue suit despite the heat.

In May, Barbera made the high-stakes decision to go ahead with ‘La Mostra’ -- now in its 77th year -- despite film festivals around the world opting to cancel, including Venice’s French rival, the Cannes Film Festival.

‘We feel a responsibility to be the first. We knew Venice will be sort of a test for everyone,’ he said.

For the past few months across the globe, most film production remained on hold and movie theatres dark due to the coronavirus.

About 6,000 people are expected to turn out this year -- about half the festival’s usual number -- as border restrictions around the globe have limited the ability of many to travel.

Most of Hollywood’s A-list will be no-shows, with Australian actress Cate Blanchett supplying this year’s star power as president of the jury.

‘It’s a festival without stars because Hollywood is still in lockdown,’ Barbera told AFP. ‘Will there be less glamour? Yes. Will there be fewer stars on the red carpet? Certainly.

‘But there will be so many good films, 65 from 50 different countries, a sign of the richness and variety of contemporary cinema.’

Eighteen films in the main competition will vie for the festival’s top prize, the prestigious Golden Lion.

Provided it was done safely, it was now time for film lovers to be back in theatre seats, Barbera said.

‘We’re tired of seeing films in streaming,’ he said.

Organisers are hoping they can safely run the festival -- due to go on until September 12 -- despite coronavirus cases on the rise in Italy and neighbouring European countries.

In one of the most radical changes, fans will no longer be allowed on the red carpet, where in past years they’ve pressed behind barriers hoping to get a photo or autograph from their favourite celebrities.