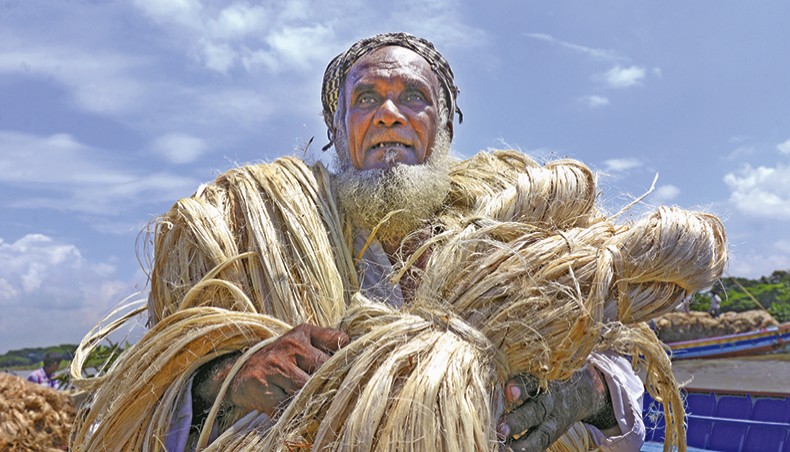 A file photo shows a man carrying jute fibres at a market on the outskirts of Dhaka. — New Age photo

The Department of Jute is dissatisfied with the setting of the maximum price of jute by the Bangladesh Jute Spinners Association.

The trade body on August 31 in a circular said that it had set the maximum price of high-quality raw jute at Tk 2,400 a mound for truckload stage at marketplace considering the overall market situation for the agricultural product.

The association also asked its 81 member mills to buy raw jute at the price set by it.

It also informed the textiles and jute ministry as well as the Department of Jute about the decision.

Receiving the circular, the director general of the Department of Jute on the same day sought explanation from the BJSA over the setting of the maximum price of the product saying that, as per Jute Act-2017, no association or trade body was empowered to set the price of jute and jute goods.

The law has empowered only the government to determine the minimum and maximum prices of jute and jute goods, DoJ director general Sowdagar Mustafizur Rahman said in a letter to BJSA secretary general Shahidul Karim.

The BJSA move may create confusion among people and the government may also face an embarrassing situation, he wrote.

Experts and jute growers, however, said that the government never set the minimum price of jute though the country’s jute law and jute policy mandated it to set the price.

They said that the government should set the price to ensure fair price of jute for farmers as well as to avoid such situation where traders tried to reap the benefit of absence of the government move.

Mustafizur told New Age on Wednesday that the department just gave a reminder to the association about the government’s authority over the setting of jute price and the association withdrew their circular after consultation with the DoJ.

In general, the market will determine the price and setting the price by a trade body may create a wrong perception among people, he said.

Mustafizur said that the government would determine the price if it thought necessary.

Farmers would lose interest in cultivating jute in case of any negative impact on price due to such move as they are now getting good price for the natural fibre, he added.

Shahidul, however, said that it was completely an internal matter of the association and the BJSA made it clear to the DoJ.

‘We did not set the price for the farmers or for the market,’ he said.

He said, ‘We just asked our members to remain cautious while purchasing raw jute above the price as it will increase the cost of production and price of finished goods and consequently they may lose international buyers.’

The association thought the price of high-quality raw jute should not be above Tk 2,400 a mound but the market will finally determine the trading price, he added.

He said that the country’s total demand for raw jute was 55 lakh bales.

Of which, BJSA members buy around 35 lakh bales and the members contribute about 70 per cent of the country’s export earnings from jute, said Shahidul.

Agricultural economist Jahangir Alam told New Age that no association could set the price as it would put a negative impact on the prices of medium- and low-quality jute, the portions dominating the market.

The government should set the minimum price of jute considering the cost of production and an attractive profit margin to keep the farmers in jute cultivation, he said.

The minimum price should be set above Tk 2,000 a mound including 20 per cent to 25 per cent profit as the production cost stands above Tk 1,600 a mound, he added.

Bangladesh Krishak Sangram Samity has been demanding that the government set the price of a mound of jute at Tk 3,000 a mound.

BKSS general secretary Shahjahan Kabir told New Age that setting of jute price at Tk 3,000 a mound could save the farmers.

There are no visible moves of the government to set the minimum price despite demands from farmers, he said.