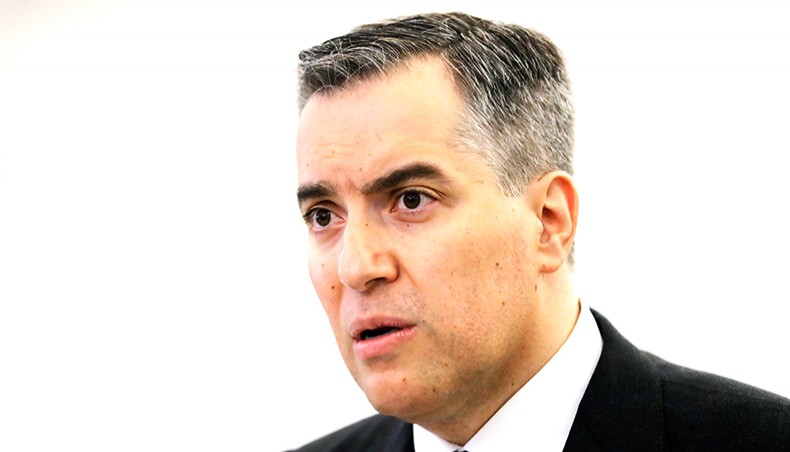 Mustapha Adib, 48, Lebanon’s former envoy to Germany, acknowledged in a televised speech that there is ‘a need to form a government in record time and to begin implementing reforms immediately’.

He vowed to resume talks with the International Monetary Fund for assistance to the country, which is in the throes of its worst economic crisis since the 1975-1990 civil war and was traumatised by Beirut’s deadly August 4 explosion.

‘I want your trust,’ an AFP correspondent heard him tell a resident of Beirut’s badly-hit Gemmayzeh neighbourhood during a tour of the area devastated by the blast that rocked the city and further shook confidence in the political class.

Macron, who had toured the area two days after the disaster, was due to return Tuesday and was expected to renew his calls for a radical overhaul of the country’s complex, sectarian political system.

Macron had demanded ‘deep change’ and warned then he would check on progress when he returned for the September 1 centenary of Greater Lebanon, expected to be a glum commemoration.

On the eve of the event, many citizens were planning to leave the country and asked whether Lebanon would live to be 101.

The 85-year-old Aoun, a hate figure to Lebanon’s large protest camp which regards him as deaf to calls for change, even urged the proclamation of a secular state.

Under Lebanon’s political system, the premier must be a Sunni, the presidency is reserved for a Maronite Christian and the post of parliamentary speaker goes to a Shia.

Speaker Nabih Berri, also reviled by demonstrators, followed suit on Monday by urging change to the country’s confessional political system, which he labelled ‘the cause of all ills’.

Adib, already dismissed by the opposition movement as a product of Lebanon’s reviled sectarian-based politics, faces the daunting task of steering the state through one of the deepest crises of its troubled 100-year history.

The Beirut blast, one of the largest non-nuclear explosions in history, is widely blamed on government incompetence and greed and compounds the collapse of Lebanon’s economy over the past few months.

A vast stockpile of ammonium nitrate that had languished at Beirut’s port for years blew up on August 4, killing at least 188 people, wounding thousands and laying waste to large parts of the capital.

It caused up to $4.6 billion worth of physical damage, according to a World Bank assessment, and a blow to economic activity of up to $3.5 billion.

Suspicion was rife that Lebanon’s long-serving political heavyweights were only paying lip service to reform ahead of Macron’s visit, expected to start around 1700 GMT.

‘When the political class talks about the introduction of the civil state, it reminds me of the devil talking about virtue, it doesn’t make sense,’ said political science professor Hilal Khashan.

‘There is a big difference between raising a slogan and really putting it to work,’ said the American University of Beirut academic.

Adib’s designation ‘will not usher in a new period in Lebanese history and I don’t think it will put Lebanon on the road of genuine political development’.

Adib emerged as a consensus option Sunday and was named premier the next day in a statement by the presidency.

Lebanon’s last government, headed by Hassan Diab, resigned after the massive explosion, which revived calls at home and abroad for radical revamp of the state.

Those who have taken to the streets in mass protests since October 17 against the entire political class had already rejected any name that might emerge from the parliamentary consultations.

Despite promises of change, the process of forming the new government follows the same blueprint that has chronically mired Lebanon in political deadlock.

Social media networks abounded with posts questioning whether a government formed by Adib would be any more effective than Diab’s, which was formed in January but failed to lift the country out of crisis.