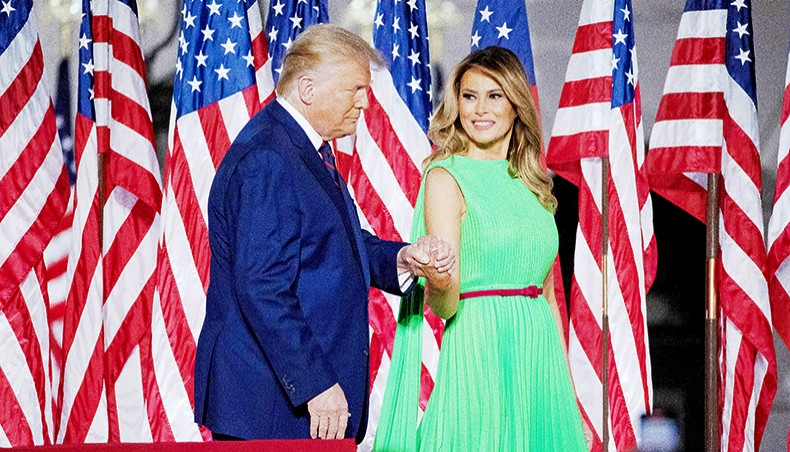 US president Donald Trump leads first lady Melania Trump off the podium as he prepares to deliver his acceptance speech for the Republican presidential nomination on the South Lawn of the White House on August 27, 2020 in Washington, DC. — Chip Somodevilla/Getty Images/AFP

On August 27, 2020, president Donald Trump of the United States delivered his acceptance speech as the presidential candidate at the Republican National Convention that was held in the White House. It was the first of its kind when the White House was used as a podium for campaign by a seating president. As noted by presidential historians, the decision to use the White House as a backdrop is a perfect metaphor for how Trump has handled the presidency — with total audacity and no regard for how his actions will change the lines of acceptable conduct for whoever follows him in the office. He treated the White House as his personal property.

More than 1,500 people were in the audience, packed cheek to jaw with very few putting a mask, on the South Lawn of the White House to hear Trump’s speech. Unlike the Democratic convention a week earlier that was held virtually, Trump wanted a big crowd whether or not coronavirus was still rampant in the country, and he got that crowd size.

However, if Trump was looking for a better Nielsen rating, it was disappointing. His primetime speech drew a rating of 14.1, which means 14.1 per cent of homes in more than 50 major markets around the country tuned in. The Democratic Party candidate Joe Biden, by contrast, drew a 17.5 rating for his acceptance speech at the Democratic National Convention. In terms of viewers, an estimated 24.6 million watched Biden’s acceptance speech across 12 networks, which was 22 minutes long, compared with the 23.8 million who watched Trump’s 70-minute Republican National Convention address across 13 different networks (one more than Biden’s).

Trump’s speech was preceded by his eldest daughter’s speech. Ivanka presented her father as a person who speaks his mind: ‘I recognise that my dad’s communication style is not to everyone’s taste. And I know his tweets can feel a bit unfiltered. But the results speak for themselves.’

Knowing that he is behind his rival in approval rating by double digits, Trump and his supporting cast did not waste any time with the scare tactics: ie, what could go wrong if the ‘socialist’ and ‘police-defunding’ Joe Biden and his ‘unpatriotic’ and ‘crazy’ democrats were to get elected and run this ‘great’ country. The message was loud and clear: you may not like what Trump says and even some of the things he does, but the alternative is your worst nightmare — unending chaos and the collapse of democracy with hoodlums and rioters running the country. ‘No one will be safe in Biden’s America.’ ‘Your vote will decide whether we protect law-abiding Americans, or whether we give free reign to violent anarchists, agitators, and criminals who threaten our citizens,’ Trump said in his acceptance speech.

Why the scare tactics? The answer is simple and a prudent one. Fear tactics work (thus, continue to be exploited in post-Hitler-Mussolini era by neo-fascist leaders like Narendra Modi in India, Suu Kyi and the Tatmadaw military establishment in Myanmar and Viktor Orban in Hungary) and is known to be a hugely powerful motivator when it comes to voting. Trump and his team knows that he isn’t winning this presidential race, unless, of course, his base is catalysed to action and the undecided voters are mobilised to vote in large numbers in his favour.

Part of the Trump campaign’s re-election strategy has been to try to make this a choice election rather than a referendum on how Trump has handled the coronavirus pandemic, the biggest test to his presidency. It’s also a brilliant ploy to deflect the public opinion about or inquiry into his own performance, eg, when he claimed half a year ago that ‘when we get into April, in the warmer weather—that has a very negative effect on that, and that type of a virus.’ He has proven himself to be either a moron or totally ill-prepared to tackle the pandemic. His arrogance, combined with sheer stupidity or failure to take timely preventive measures has resulted in the deaths of nearly two hundred thousand Americans, let alone the infection of so many.

As to his own achievement, Trump did not fail to mention the economic ‘miracle’ he had delivered before the COVID-19 hit hard. It’s true that before the coronavirus pandemic struck, the US unemployment rate was just 3.5 per cent — as low as it had been in half a century and that the US economy added 6.8 million jobs in 37 months. But economic growth fell short of what he promised. Moreover, in the 37 months before Trump took office, the US economy added 8.2 million jobs, surpassing Trump’s record.

The economy grew 2.2 per cent last year, roughly on par with the pace over the past decade. Growth briefly hit Trump’s 3 per cent target in 2018, following passage of the Republican tax cut. However, it was short-lived with sagging global demand as well as uncertainty stemming from the president’s trade war with not only China but with more friendly nations like Canada and those within the European Union.

With high unemployment rate, the economy is in dire condition now. Trump claimed, ‘Over the past three months, we have gained over nine million jobs, and that’s a record in the history of our country.’ The fact is while US employers added more than nine million jobs in May, June and July, Trump and his administration has nothing to take credit for the job numbers. More importantly, that’s fewer than half the 22 million jobs that were lost in March and April as the economy slid into the deepest recession since the great depression. What’s more, job gains slowed last month. And at 10.2 per cent, the unemployment rate is still higher than at any time during the great recession more than a decade ago. On Thursday, the labour department reported that more than a million people filed new claims for unemployment benefits last week. Twenty-seven million people were collecting unemployment benefits as of early August.

President Trump’s battle cry against the S-word — socialism is one that has been repeated throughout the Republican National Convention, from his campaign advisers to former ambassador to the UN Nikki Haley. In fact, the S-word has been levelled against Democrats for decades. But as noted by many analysts, Democrats’ propensity to lean towards regulation and empowering the federal government isn’t actually a socialist political system, where the state uniformly provides social welfare services like health care and controls large sections of the economy.

Trump tried to present himself as the law-and-order restoring president and the theme was not lost in his acceptance speech by trying to draw a contrast with Democrats. Quite a few Black Americans were brought to the podium to share their anecdotes, which belie the reality experienced by most Blacks in this land of Lincoln where they are more prone to be killed for minor crimes in the hands of the police simply because of their skin colour. Trump’s racially charging and religiously maligning tweets and speeches have sent a wrong message polarising the communities as never before in this century. During his tenure, religious bigotry and racial injustice have simply compounded manifold. But such ground realities did not stop him to falsely claim that he has ‘done more for the African-American community than any president since Abraham Lincoln, our first Republican president.’

White evangelicals and other conservative Christians have remained, by and large, a bastion of support for president Trump, and his speech didn’t disappoint them. He presented himself as an upholder of the Christian faith and a protector of its faithful. He said, ‘Unlike many presidents before me, I kept my promise, recognised Israel’s true capital and moved our embassy to Jerusalem.’ He said, ‘I withdrew from the terrible one-sided Iran nuclear deal.’ He also said, ‘We also recognised Israeli sovereignty over the Golan Heights.’

It is worth noting that Trump recently said publicly that he moved the US embassy to Jerusalem ‘for the evangelicals,’ who express strong support for Israel. The embassy move was met with support from many Jewish and evangelical groups but was criticised by some religious leaders. All these actions, appeasing the Zionist state of Israel, are illegal under international law and have weakened American position internationally. But to Trump, such supports from the international community never mattered an iota.

From the first day of his administration, president Trump signalled that he has little use for the international order. Since taking office, he has pursued his ‘America First’ foreign policy with gusto, withdrawing from an Asia-Pacific trade agreement, the Paris climate accord (on how to fight global warming and reduce greenhouse gas emissions), the Iran nuclear deal or, more properly, the Joint Comprehensive Plan of Action, and even the World Health Organisation. He has questioned the value of NATO and sought to undermine the World Trade Organisation.

In his acceptance speech, Trump did not mention that his unilateral action to withdraw from the JCPOA has been a breach of promise that has weakened America’s position globally, which is reflected in a number of recent votes in the United Nations. Within the UN, the US is more isolated than ever before. When the administration asked the UN Security Council to reimpose sanctions on Iran this month, the Dominican Republic was the only country to side with the United States.

Trump claimed to reduce the US troop presence in the three countries where the American military has been most active — Iraq, Afghanistan and Syria. However, the conflicts have not been resolved, and many in the US national security establishment say the US should maintain at least a limited presence to prevent a resurgence of heavy fighting.

Remember: four years ago, Donald Trump promised that Mexico would pay for the wall he wanted to build along the US-Mexico border? In his speech, Trump claimed, ‘We have already built 300 miles of border wall, and we are adding 10 new miles every single week. The wall will soon be complete’

The facts are, 275 miles of that wall have been built and Mexico has not paid a penny. While Congress has authorised some spending for the project, most of the money for wall construction has been redirected from the military at the president’s insistence. Last week, his former advisor Steve Bannon and three others were indicted on charges that they siphoned hundreds of thousands of dollars each from the wall fund for their own personal use. Bannon has pleaded not guilty.

In the midst of race riots, defunding the police in some cities have become a major issue, which Biden opposes. And yet, the issue is exploited by Trump to portray Biden as the future of disorder. He said, ‘Make no mistake, if you give power to Joe Biden, the radical left will defund police departments all across America.  They will pass federal legislation to reduce law enforcement nationwide.  They will make every city look like Democrat-run Portland, Oregon.’

For years ago, Trump promised to make America ‘great’ again. That did not happen. America is isolated internationally, and remains divided and polarised internally, as never before. The words ‘great’, ‘safe’, ‘strong’ and ‘proud’ have all been abused and lost their usual meanings and lustre under his administration. Can American voters afford to have four more years of nightmare with Trump back in the White House? I know my answer: it’s a ‘no’.