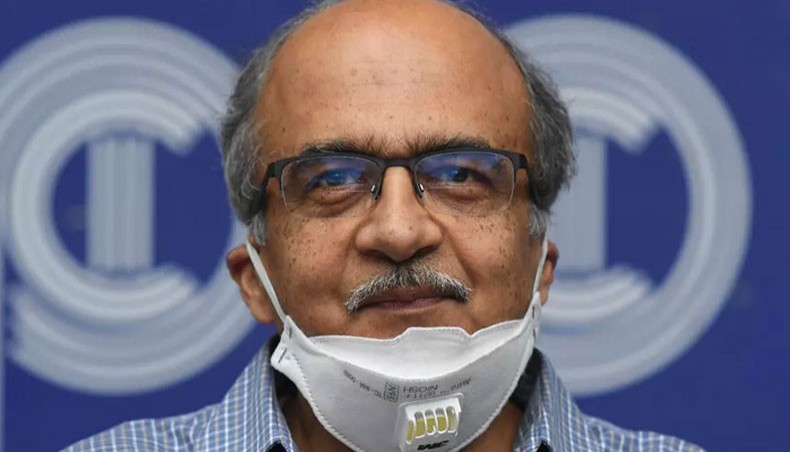 Prashant Bhushan smiles during a press conference in New Delhi after being fined a token one rupee for contempt of court. —AFP

India’s top court imposed a symbolic one rupee fine, one US cent, Monday on a celebrated public service lawyer for contempt in a case that raised concern about free speech in the world’s largest democracy.

Prashant Bhushan, 63, was convicted in August for two tweets deemed critical of the judiciary—including one showing a picture of the chief justice astride a Harley-Davidson motorbike.

Following Monday’s sentencing, Bhushan tweeted a photo of him holding a one rupee coin—saying his lawyer and senior colleague Rajiv Dhavan had given him the money.

Bhushan had been ordered to pay the fine by mid-September or face three months in jail and a suspension from the bar.

The case raised concerns about freedom of speech, but also was seen as a battle of wills in India’s legal ether.

Bhushan is a vocal critic of prime minister Narendra Modi’s Hindu-nationalist government and over the years has filed a number of public interest cases and served pro bono in the trials of rights activists.

Hailing from legal blue blood, he studied at top Indian universities—and Princeton in the US—before embarking on a celebrated career at home.

Following the imposition of a coronavirus lockdown in March, Bhushan filed petitions concerning the plight of millions of migrant workers who were left without jobs.

In June he tweeted a picture of chief justice Sharad Arvind Bobde on a motorbike—without a face mask and surrounded by people despite the coronavirus pandemic.

He accused him of hypocrisy at a time when the court was in lockdown, ‘denying citizens their fundamental right to access justice’.

Bhushan was charged with contempt, but—apparently keen to avoid a fuss—the court offered him the chance to apologise and avoid punishment.

He refused, however, saying that would amount to ‘contempt of my conscience’.

Monday’s sentence ended what some in the legal community increasingly saw as a circus, although the three-judge panel defended their decision.

‘Freedom of expression is there, but rights of others should also be respected,’ said the bench, sitting without chief justice Bobde.

After last month’s verdict, several lawyers and retired judges said it went against freedom of expression and called the contempt laws a colonial legacy.

Bhushan still faces a separate contempt charge over a 2009 media interview he gave in which accused judges of corruption.

That case will be heard on September 10.