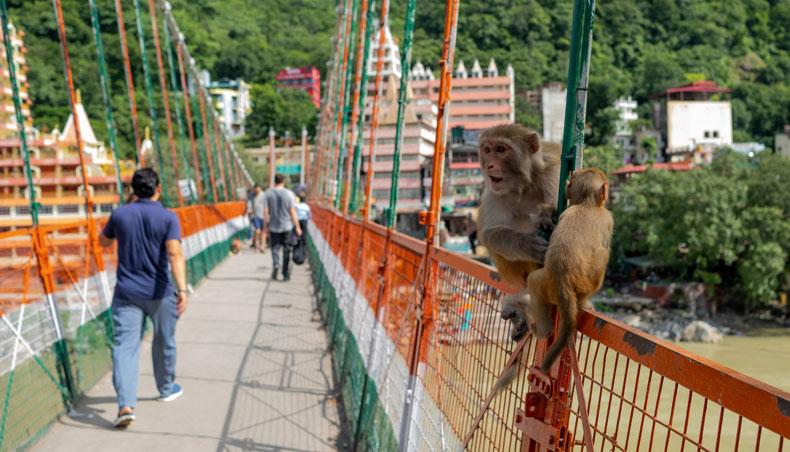 This photo taken on October 1, 2019 shows people walking while monkeys sit on a railing of the Lakshman Jhula footbridge over the Ganges river in Rishikesh. — AFP photo

A French woman arrested for allegedly making a video of herself without clothes on a holy bridge in India apologised Sunday, but denied being completely naked and said that she carried out the stunt to bring attention to sexual harassment.

Indian police said on Saturday that the 27-year-old — identified as Marie-Helene — faced charges under the country’s internet laws after posting footage of herself on the LakshmanJhula, a footbridge over the Ganges river made famous by the Beatles in the 1960s and which remains a draw for backpackers and yoga practitioners.

‘She told us she sells bead necklaces online and the shoot was aimed at promoting her business,’ said RK Saklani, head of the local police station.

But in a statement to AFP, Marie-Helene said that no-one was around when she carried out the stunt, and she did it to raise awareness about harassment in India.

‘I chose to partially uncover on LaxmanJhula because each time I crossed the bridge I felt I was being harassed... My Indian sisters and fellow female travellers surely have experienced the same,’ she wrote.

‘The main goal was to help oppressed Indian women to access education and to leave abusive marriages or situations, where there are no other options or help,’ she added.

Police said that Marie-Helene was arrested on Thursday and released on bail. Her mobile phone was seized as part of the investigation.

‘The first thing I want to say is that I am sorry my actions hurt the local community,’ Marie-Helene said, adding,‘I was lacking awareness on cultural specificities.’

Police said that they were alerted after the footage was posted on social media.