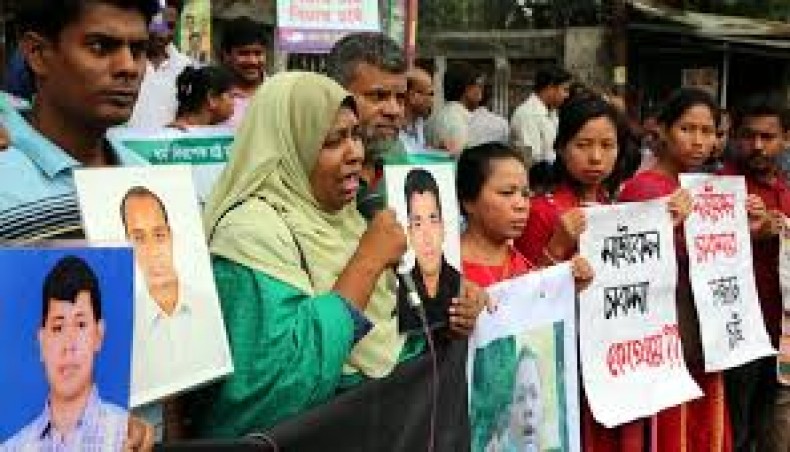 Mayer Daak, a platform of the families of victims of enforced disappearance, form a human chain in front of National Press Club in Dhaka on on May 25, 2019 demanding to return their missing relatives before Eid. -- Sony Ramany

The organisations made the allegation in a joint statement on Friday, ahead of the International Day of the Victims of Enforced Disappearances to be observed on Sunday.

They said, ‘The economic hardship caused by the pandemic has had a detrimental impact on the mental, social, and physical well-being of families of the disappeared, and on their ability to search for their loved ones.’

‘Enforced disappearance is part of the ruling party’s ongoing crackdown on freedom of speech. Disappearance, or threats of disappearance, is used to silence critics and repress the opposition,’ it alleged.

‘The Bangladesh government authorities have failed to respond to the repeated calls from families of the disappeared for investigations into the enforced disappearance of their loved ones. Victims and their families are met with repeated obstacles to legal redress, including police refusal to file cases and threats to drop cases,’ it said.

The organisations alleged that law enforcers were enjoying a culture of impunity, perpetuated by the ruling party’s refusal to acknowledge the occurrence of enforced disappearances or hold security forces accountable.

‘Although enforced disappearances had taken place earlier, this practice has increased exponentially since the present Awami League-led coalition took office in 2009. Numerous members and supporters of the political opposition were subjected to enforced disappearance around the 2014 general election, which the major opposition parties boycotted,’ it said.