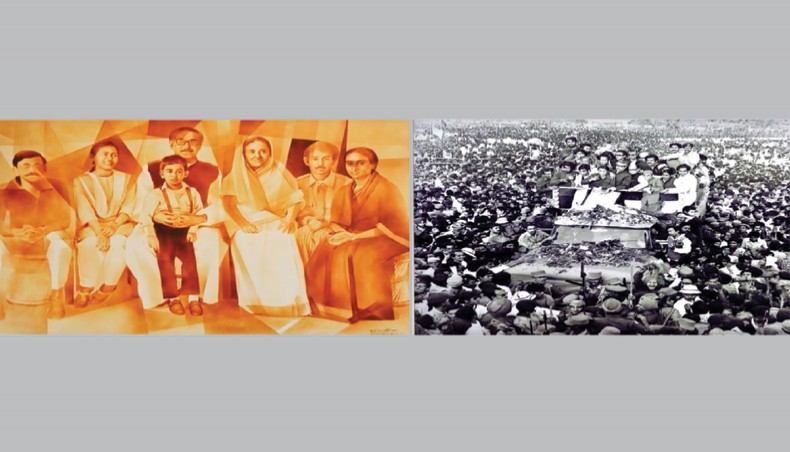 An exhibition featuring paintings and photographs portraying the life and works of country’s founding president Sheikh Mujibur Rahman and grenade attack on an Awami League rally on August 21 in 2004 is under way at Bangladesh Shilpakala Academy.

The event features a total of 340 artworks by 250 artists along with collected photographs, which have been displayed at the National Art Gallery 1, 2, 3 and Bangabandhu Corner of the National Art Plaza of BSA.

Paintings, portraying historic March 7 speech, liberation war, Sheikh Mujibur Rahman, Sheikh Russel, Sheikh Hasina and others, which have been created by both emerging and acclaimed artists, have been displayed at National Art Gallery 1 and 2.

The works at gallery 1 have been divided into two segments. A total of 100 watercolour and oil paintings created by prominent artists have been displayed under one segment and the other segment features 90 artworks - based on the books ‘Asamapta Atmajibanee’ and ‘Amar Dekha Naya Chin’ - by emerging artists.

Nearly 150 watercolour paintings depicting different stages of Sheikh Mujibur Rahman’s life, his role in the liberation war and his political ideology have been displayed at gallery 2.

Besides, nearly 250 photographs from the archives of BSA and other government organisations portraying the political and personal life of Sheikh Mujibur Rahman have been displayed at gallery 3.

The exhibition will remain open till September 6. The event can also be viewed online at http://shilpakala.gov.bd/.