Defaulted loans in 16 banks above 10pc 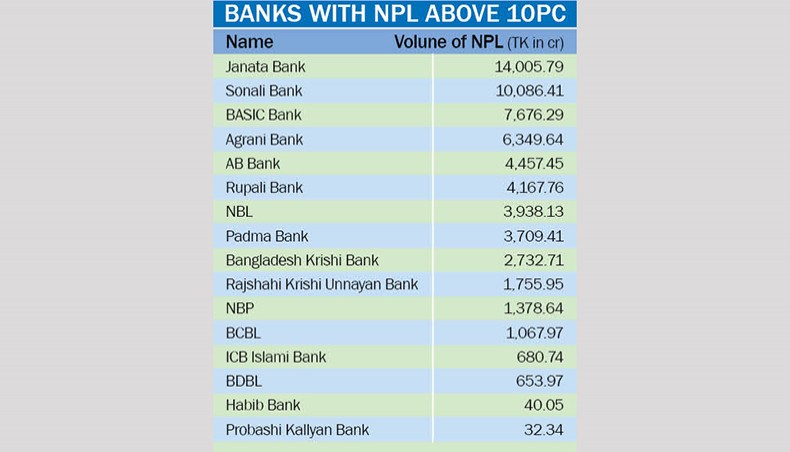 The ratio of non-performing loans or classified loans against outstanding loans at 16 banks in the country, including nine state-owned banks, stood above 10 per cent at the end of June this year.

Banking experts said that the NPL ratio at the banks stood high mainly because of lack of governance within the banks and irregularities, putting the money of the depositors at stake.

As a result of the high NPLs, the government has bailed out one of the new generation banks and continued to inject fresh money into the state-owned banks, they said.

No effective measure was taken either by the government or the central bank to contain the irregularities, encouraging the bank money launderers to repeatedly do the same thing, they said.

Instead of taking tough measures to contain the NPLs by punishing the defaulters, the government last year bailed out the loan defaulters by allowing them to reschedule default loans by paying a paltry 2 per cent down payment with a 10-year repayment tenure.

Apart from people being hit by the coronavirus outbreak, he mentioned that a large number of borrowers had been refraining from repaying bank loans by taking advantage of the BB’s embargo on degrading loans till September this year.

In the immediate past fiscal year, the government had mentioned about forming a bank commission but no visible progress was noticed, he said, adding that the initiative to form an asset management company to deal with the issue was a good move but it was progressing at snail’s pace.

The high NPLs is not only putting the depositors’ money at stake but also creating distrust among the international banks through which international trade and businesses are executed, he said.

Even after the wholesale indemnity, the country’s NPL ratio remained one of the highest among South Asian countries at 9.16 per cent.