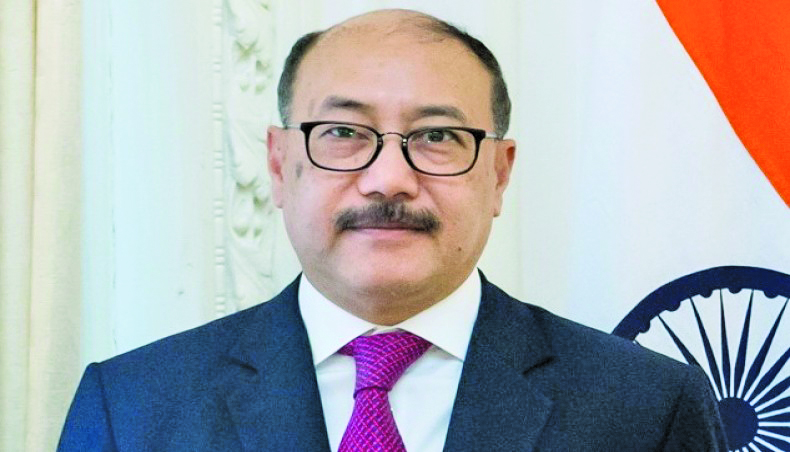 THE Indian foreign secretary Harsh Vardhan Shringla’s hastily arranged and sudden visit to Dhaka is shrouded in mystery. The centrepiece of the visit was his audience with Sheikh Hasina. Not a word has come out of the Bangladesh Prime Minister’s Office, not even who were present at the important audience. The Indian side has been equally silent. Many like this writer wanted to know if the Indian high commissioner Riva Ganguli was present. A picture of Sheikh Hasina and the Indian foreign secretary in a tête-à-tête without masks in the media gave away the fact that it was one taken from his visit to Dhaka in March.

Speculative reports aplenty have come out in the Bangladesh and Indian media as a result of the decision of both sides to be silent about what transpired at the Bangladesh PMO. The Indian media, nevertheless, concluded unanimously that the visit was successful and would help in cementing the traditional ties. The Hindu, one of India’s most credible national English daily newspapers, went to the extent of reporting that the Bangladesh prime minister and the Indian foreign secretary discussed a two-year road map of Bangladesh-India relations.

The Bangladesh foreign secretary Masud Bin Momen described the visit as normal undertaken in the conduct of bilateral relations. He further stated that he and his counterpart had discussed India’s offer of its COVID-19 vaccine and transshipment issues at their meeting. The Bangladesh foreign minister Dr AKA Momen who was away in Sylhet zeroed on the vaccine as the main reason for the visit.

It was obvious given the blackout of any news of what happened at the PMO that whatever else was covered in the media about the rest of Harsh Vardhan Shringla’s visit did not reveal anything about what came out of it. The visit was hardly normal as the Bangladesh foreign secretary tried to mislead, wittingly or otherwise. One thing was, nevertheless, certain though that the visit occurred after Bangladesh-India relations had hit a hard rock over the country’s drifting towards China for which there was much credible evidence.

The Hindu report that the prime minister had discussed a two-year road map of bilateral relations with the Indian foreign secretary was an insult to Bangladesh given the latter’s position as a bureaucrat in the Indian government. Harsh Vardhan Shringla was sent to Bangladesh in a chartered aircraft, perhaps, the first time an Indian foreign secretary was ever treated in such a regal manner on a visit to Dhaka but he was only a messenger to convey New Delhi’s concern that Bangladesh was entering too deep the Chinese sphere of influence. It was not the first time though that New Delhi faced a fear of China concerning Bangladesh that has historically been India’s friendliest neighbour under an Awami League-led government in Dhaka.

New Delhi was involved in a similar effort in bringing Bangladesh back from developing a strategic-economic relationship with China after there was a change of government in India from the Congress to the BJP in 2014. New Delhi sent Sushma Swaraj, the external affairs minister, to Dhaka soon after Sheikh Hasina had visited Beijing in June 2014. Narendra Modi came to Dhaka the following year on a state visit where Bangladesh-China relations was an important issue of his discussion with Sheikh Hasina. Between the two visits, New Delhi succeeded in stopping Dhaka from implementing $1 billion projects, many of strategic nature, that Dhaka signed during Sheikh Hasina’s 2014 visit to China.

A lot has happened since. First, New Delhi stayed away from the 2018 Bangladesh election despite many signals from Dhaka for help. Dhaka reminded that it was in more desperate need for New Delhi’s assistance in 2018 than in 2014. Second, Dhaka turned to China for help and received it. More importantly, the Awami League returned to power without having to thank India. Third, Sheikh Hasina removed many pro-Indian heavyweights from her new cabinet. Fourth, India downgraded her October 2019 visit to New Delhi from a state visit she was given in 2010 and 2017 to an official visit. Fifth, New Delhi, ignored her visit to Kolkata in November 2019.

The above-cited instances underlined that Bangladesh-India relations drifted apart between New Delhi’s advise to the AL-led government not to expect its assistance in the 2018 election through Sushma Swaraj on her visit to Dhaka in November 2017 and the visit of the Indian foreign secretary. New Delhi made no effort to bring Dhaka back confident as Dhaka would come back on its own because it had no alternative to India. That did not happen.

Instead, the BJP government chose to pursue the blatantly anti-Muslim, anti-Bangladesh National Registration Act and the Citizenship Amendment Act to energize its massive Hindutva base. Amit Shah called Bangladeshi Muslims ‘termites’ as bait for Hindutva and other BJP leaders threatened to throw Bangladeshi Muslims into the Bay of Bengal. These actions encouraged Bangladesh towards China that used the opening to make huge investments in mega projects that Dhaka welcomed gladly.

Riva Ganguli waited unsuccessfully for many months to bring to Sheikh Hasina’s attention the growing distance between New Delhi and Dhaka. Meanwhile, New Delhi was given a preview of change in Bangladesh when pro-Indian groups arranged a human chain to protest China’s actions in the Indo-China border conflict. Well-known leaders who in the past were ever ready to show their pro-India sentiments were absent in the thinly gathered human chain.

Sheikh Hasina, nevertheless, did her best since coming to power in January 2009 to keep Bangladesh-India relations as those between two friendly neighbours, acknowledging India’s role in Bangladesh’s liberation even after New Delhi had distanced from her government leading to the 2018 election. New Delhi failed her time and again notwithstanding her goodwill. New Delhi did not focus on its failures because its miscalculation led it to believe that an AL led government had no alternative but remain loyal to it that encouraged her to move towards China.

Two recent developments and a flurry of reports in the Indian media jolted New Delhi’s complacency. First was China’s $1 billion offer for ‘a comprehensive management and restoration project of the Teesta’, the river over which Bangladesh was deeply unhappy with India that Indian Express described as ‘China twist in India-Bangladesh Teesta river challenge.’ The second was Chinese ambassador in Dhaka’s gifts for Khaleda Zia on her birthday that underlined how deeply China has entrenched itself in Bangladesh to feel comfortable with such a decision ignoring Sheikh Hasina’s sensitivity. These developments expedited New Delhi’s hasty decision to send its foreign secretary to Dhaka, perhaps, believing it would help to woo Sheikh Hasina away from China.

That did not happen because the decision was both hasty and condescending, taken unilaterally. Sheikh Hasina handled the visit deftly underlining that Bangladesh should not be taken lightly. She kept the visitor waiting in his hotel room for four hours and an hour more at the PMO before granting him audience according to reports in the Bangladesh media. Certain sections of the Bangladesh media also dismissed the Hindu report on the road map. Sheikh Hasina flagged for New Delhi unmistakably that she had no reason to discuss bilateral relations with an Indian foreign secretary. It was no coincidence therefore that no Bangladeshi official either received him at the airport or saw him off.

Harsh Vardhan Shringla’s Dhaka visit has misfired for many reasons. First Indian arrogance again led New Delhi to take the AL government for granted. Second, New Delhi failed to acknowledge that Sheikh Hasina is now dealing with India on the China issue with vast majority of the people behind her. Finally, China is on the cusp of emerging as the world’s number one power and Bangladesh has moved much deeper in its relations with China that is its sovereign right.

Therefore, New Delhi must do much more to regain its influence in Bangladesh. It must look at the impact of Hindutva, NRA, CAA among Bangladesh’s Muslim population and make them the primary focus of its relations with the country. And a change in attitude in dealing with Bangladesh would help.