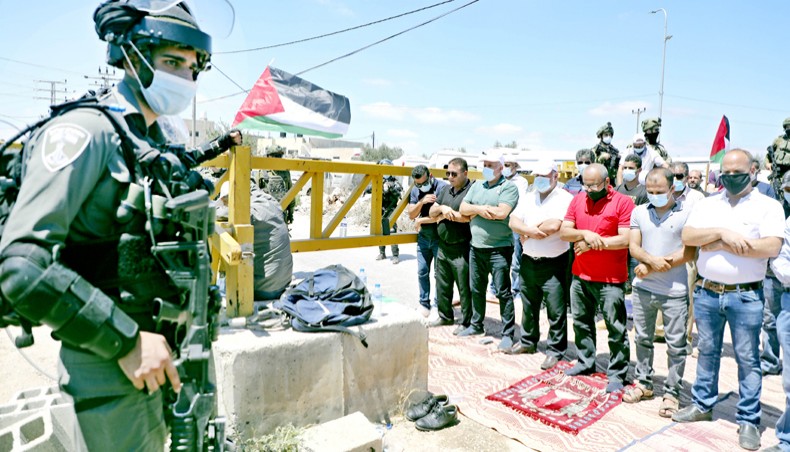 Members of the Israeli security forces stand guard as Palestinian demonstrators perform the Friday prayers during a rally to protest against Israel’s plan to annex parts of the occupied West Bank, in the village of Haris, southwest of Nablus, on Friday. — AFP photo

Parts of southern Israel were partially cordoned off by the security forces.

Israel said the bombs were in response to seven rockets launched from Gaza, six of which were intercepted by its air defences.

Witnesses in Gaza said rockets were launched towards the town of Sderot, just across the border.

The rocket that was not intercepted damaged the roof of a house in Sderot, but did not cause any casualties, an AFP photographer said.

Israel has bombed Gaza almost every night since August 6 in retaliation for the launch of balloons fitted with fire bombs, or, less frequently, rocket fire, across the border.

The number of rockets fired from Gaza was the largest number in a day since the latest round of exchanges began two weeks ago.

Hamas ‘will not hesitate to fight a battle with the enemy if the escalation continues, if the bombardments and the blockade continue,’ Hamas spokesman Fawzi Barhum said in a statement.

‘If the Israeli occupation continues its aggression... it must pay the price,’ he added.

Israeli defence minister Benny Gantz on Friday warned the army would ‘attack our attackers and deal them a very heavy blow’.

‘Gaza residents suffer at the hands of Hamas,’ he said in a statement following a situation assessment with the chief of the army, vowing to continue protecting Israel’s residents.

It has banned Gaza fishermen from going to sea and closed its goods crossing with the territory, prompting the closure of Gaza’s sole power plant for want of fuel.

The reprisals came after an Egyptian delegation shuttled between the two sides, trying to broker a return to an informal truce.

Egypt has acted to calm repeated flare-ups in recent years to prevent any repetition of the three wars Israel and Hamas have fought since 2008.

The latest ceasefire, which has already been renewed several times, is bolstered by millions of dollars in financial aid from Qatar to Gaza.

The truce provided for permits for Gazans to work in Israel and financing for Gaza development projects, both measures that would provide some economic relief in an impoverished territory where unemployment exceeds 50 per cent.

According to a source close to Hamas, the movement wants the extension of an industrial zone in the east of Gaza, and the construction of a new power line.

Hamas also wants the number of work permits issued to Gazans to be doubled to 10,000 once anti-coronavirus restrictions are lifted, the source said.

Sources said the twin issues were at the root of the latest flare-up.