WHO warns against further lockdown lifting 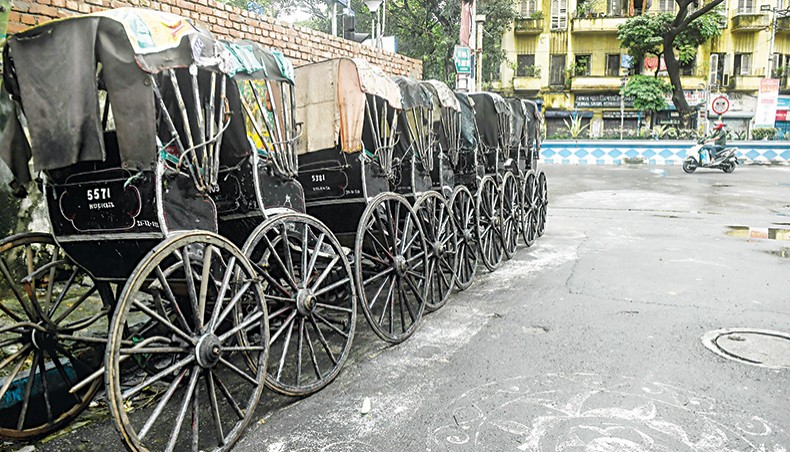 Hand-pulled rickshaws are parked on the roadside during the second day of the two-day state-imposed lockdown as a preventive measure against the surge in COVID-19 coronavirus cases in Kolkata on Friday. — AFP photo

Spikes in coronavirus infections in European countries caused alarm on Thursday but the World Health Organisation said the continent should be able to fight the pandemic without reimposing full lockdowns.

While Italy registered 845 new cases on Thursday, its highest daily tally since May, France reported 4,700 fresh infections — a massive increase on the previous day. While Spain’s daily increases topped even those of France, Germany was examining its own resurgence.

Worrying trends also emerged in India as a new study suggested more than a quarter of Delhi’s 20 million people may have been infected without showing symptoms — backing up several similar studies.

The figures added urgency to the desperate bid to find a vaccine for the virus, which has infected more than 22 million and killed hundreds of thousands since it first emerged in China late last year.

Russia announced on Thursday it was pushing forward with testing on more than 40,000 people of its candidate drug, known as Sputnik V, which is already been hailed by Russian officials as a success even as experts questioned the rigour of the testing regime.

Africa provided a brighter perspective on Thursday, registering a significant drop in the number of infections last week.

‘We have begun to bend the curve slowly... it’s important to recognise those slight tendencies that are positive,’ said Dr John Nkengasong, head of the African Union’s health body, Africa CDC.

The continent has suffered less harm than most other regions from the pandemic, which has hit the Americas harder than anywhere else.

The United States continues to bear the brunt in health terms and is suffering grim economic fallout.

The number of Americans filing claims for joblessness each week topped one million again, US officials said on Thursday, an increase on the previous week’s figures.

Globally, the airline industry continues to take a buffeting — Australian flag carrier Qantas posted an annual loss of almost $2 billion after a ‘near total collapse’ in demand.

Online shopping is one of the few sectors still thriving in the pandemic, and second-quarter results from Alibaba once again bore this out as the Chinese e-commerce giant recorded growth of 34 per cent.

The crushing economic damage has sprung not just from the virus itself but also from the lockdowns that largely halted business activity across the world.

With many nations creeping back towards restrictive measures, the WHO said European health authorities are now better prepared and should not need to resort to the complete closures endured particularly by the Spanish and Italians.

‘We can manage the virus and keep the economy running and an education system in operation,’ said Hans Kluge, head of the WHO’s European branch.