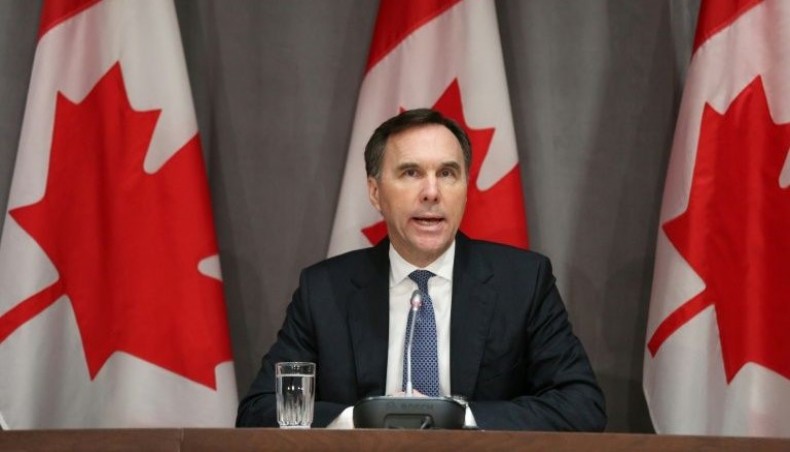 Canada’s finance minister Bill Morneau announced his resignation Monday, on the heels of an ethics scandal and amid a reported split with prime minister Justin Trudeau over pandemic spending.

Morneau, who has held the post since 2015, told a news conference that he met with Trudeau to inform him that he would not run in the next election, and that a new finance minister with a long-term outlook was needed.

‘As we move to the next phase of our fight against the pandemic and pave the road towards economic recovery, we must recognise that this process will take many years, it’s the right time for a new finance minister to deliver on that plan for the long and challenging road ahead,’ Morneau said.

‘That’s why I’ll be stepping down as finance minister, and as member of parliament,’ he stated.

Morneau said he would now run for the job of secretary general of the Organisation for Economic Co-operation and Development.

For the past week, Canadian media have reported on a purported rift emerging between Morneau and Trudeau on how to reboot the Canadian economy weakened by the new coronavirus pandemic, as the government budget deficit soared to more than $257 billion.

Canada’s ethics commissioner also launched an investigation into the minister’s ties to a charity tapped by Ottawa to distribute pandemic aid to young Canadians.

Trudeau is also being probed over his family ties to the WE Charity, which paid his wife, brother and mother nearly Canadian $300,000 for speaking engagements in recent years.

The prime minister apologised last month for the affair, saying he made a mistake in not recusing himself from discussions about awarding the roughly Canadian $500 million contract to distribute student scholarship funds to WE Charity.

The program has been cancelled but the controversy remains.

Opposition parties had called for Morneau to resign after he revealed that he had only recently paid back more than Canadian $41,000 in travel expenses to the charity, and that one of his daughters works for WE Charity while a second daughter volunteered for the organisation.

The reimbursement check was meant to cover expenses incurred by the charity over two humanitarian trips he and his family took in 2017.

The scandal has damaged Trudeau’s minority government in public opinion polls, but his Liberal party is still positioned well for an early election, according to recent polls.000

The Conservatives and New Democrats on Monday said Morneau’s departure was a sign of a government ‘in chaos’ and that the former businessman was being made a scapegoat.

‘At a time when Canadians are worried about their health and their finances, Justin Trudeau’s government is so consumed by scandal that Trudeau has amputated his right hand to try and save himself,’ Tory leader Andrew Scheer said in a Twitter message.

The finance post is one of the most important in government as the country goes through the most serious economic crisis since World War II.

In a statement, Trudeau thanked Morneau for his tireless work to ‘create a resilient, fair economy that benefits everyone.’

He said Morneau had led the rollout of emergency benefits for millions of Canadians who lost their jobs and businesses that were forced to close temporarily due to a pandemic lockdown.

And, he added, Canada will ‘vigorously support’ Morneau’s bid to lead the OECD, which ‘will play a critical role in the global economic recovery.’

Now the focus will shift to Morneau’s successor.

The job could also go to former Bank of Canada and Bank of England governor Mark Carney, who is currently living in Ottawa and has been informally providing policy advice to the government.