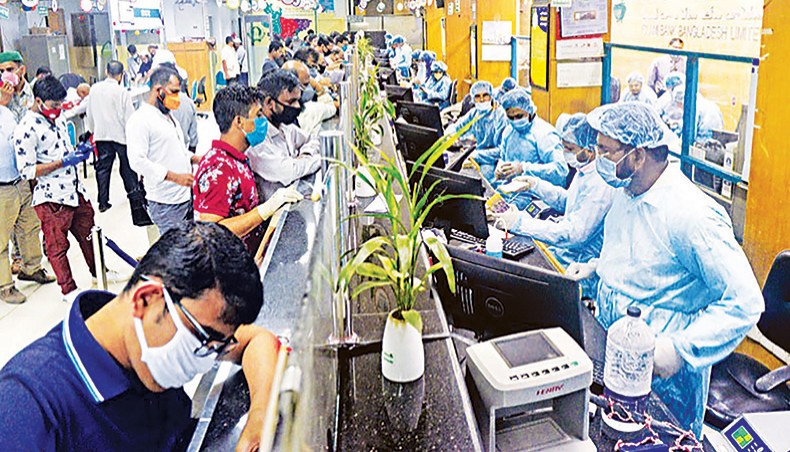 A file photo shows clients queuing up while officials in protective gears giving services at a branch of a private bank in the capital amid the coronavirus outbreak in the country. — New Age photo

Interbank electronic money transfer in the country declined by 35.49 per cent in June this year as people began returning to their normal lives despite the high infection rate of the deadly virus.

As per the Bangladesh Bank data, electronic money transfer through its network, known as the Bangladesh Electronic Fund Transfer Network, fell to Tk 28,927.44 crore in June against Tk 44,842.80 crore in the previous month.

Interbank electronic money transfer soared by 76.55 per cent to Tk 32,815.20 crore in April than the previous month, the first month of the countrywide shutdown imposed to tackle the spread of the coronavirus, as people avoided physically visiting bank branches for transactions.

The transaction volume in May was the highest through the BEFTN.

Interbank electronic money transfer displayed a normal trend in June because people were returning to their normal lives after the end of the lockdown on May 30 despite the high infection rate of coronavirus, said a high official of the Bangladesh Bank.

Mutual Trust Bank managing director Syed Mahbubur Rahman said that people stayed at home from March to May when the countrywide lockdown was in place.

During the lockdown, many people paid their various bills, including business and shopping bills, through the electronic transfer system, he said.

However, electronic money transfer declined in June because people began going back to their normal lives and they were now carrying out their transactions physically, said Mahbubur, also a former chairman of the Association of Bankers Bangladesh.

All types of bank transactions have returned to normal, except for import-export, he informed.

Electronic money transfer increased in April and May because an extra amount of money was transferred through the network during the period, said Pubali Bank managing director Md Abdul Halim Chowdhury.

He said that the country’s banks implemented the Tk 5,000crore stimulus package for workers and employees’ salaries of export-oriented industries in April, May and June.

The funds were transferred to the workers’ accounts through mobile financial services BKash, Rocket and Nagad.

As a result, electronic money transfer surged in the period but the trend has now become normal again, said Abdul Halim.

Although, the value of electronic transactions has increased, especially amid the pandemic, he said.

It facilitates both credit and debit transactions as a lead over the cheque clearing system.

Most government salaries, social benefits, all social safety net payments and other government payments are processed through the BEFTN, according to the payment system department official of the BB.