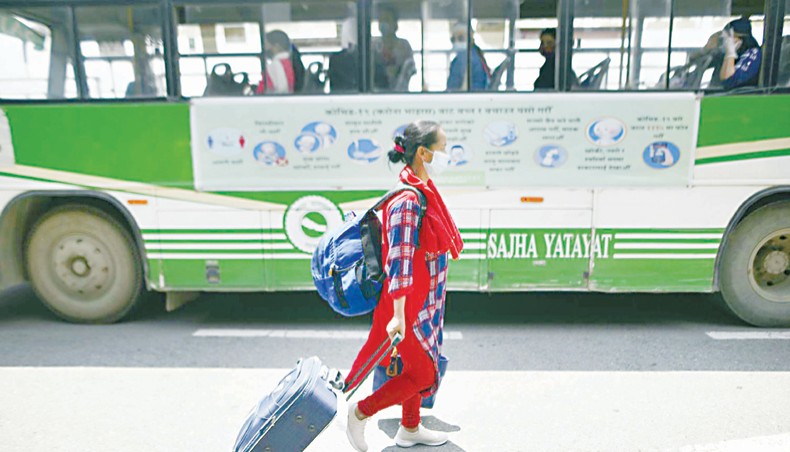 A Nepalese worker arrives at the Tribhuvan International Airport from Kuwait amid the COVID-19 pandemic in Kathmandu on June 11. — PA Images/Nur Photo/Narayan Maharjan

IN A world where nationalism and social division is increasing, bigotry growing, are the words refugee, asylum seeker, migrant worker, derogatory labels triggering prejudice and intolerance? Such terms create an image of ‘the other’, separate and different, strengthening tribalism, feeding suspicion, our common humanity denied.

Under the shadow of COVID-19 those living on the margins of society have been further isolated; the refugees and migrants of the world, those displaced internally or in a foreign land, people living in war zones, and the migrant workers in the Gulf States, India, Singapore and elsewhere.

Refugees/migrants and migrant workers are among those most at risk from COVID-19, the economic impact of the pandemic as well as xenophobic abuse linked to the virus. Migrant workers (who universally have few or no labour rights) from Qatar to India have been discriminated against, discarded and ignored. Migrants, particularly those of Chinese or Japanese appearance in the US and elsewhere subjected to violence and abuse, and in refugee camps across Europe and the Middle East, including Gaza, thousands have been left in unsafe camps without medical support.

Homeless, hungry and at risk

EVEN before the pandemic erupted, to be a refugee, migrant, or migrant worker was commonly to be mistrusted, marginalised and in danger. Whether working as a maid in one of the Gulf States, an internal migrant worker in their homeland or living inside an overcrowded refugee camp these men, women and children are amongst the most vulnerable people in the world. In Europe, where thousands of refugees (many from Syria, Iraq and Afghanistan) are packed into camps, their lives already swamped by uncertainty, the fear of the virus hangs heavy. Lacking sanitation and essential services these overcrowded tarpaulin cities are unsafe; the Moria refugee camp on the Greek island of Lesbos, for example, was designed to accommodate 2,840, but now has 19,000 people; 40 per cent are under 18, self-harming and attempted suicides are widespread. Compounding the heightened risks COVID has created, since July 2019 asylum seekers throughout Greece no longer have free access to the healthcare system, other than emergency support.

Meanwhile, in countries with large populations of migrant workers COVID-19 and the economic impact of the pandemic is adding additional layers of suffering to already arduous lives, not just of workers, but the families migrant workers support. According to the UN, round 800 million people globally are supported by funds sent home by migrant workers. Families depend on such payments to pay rent and buy food; when this flow stops, as is the case for many now, poverty and the risk of starvation is made more acute. The World Bank is warning of huge drops in global remittance payments of about 20 per cent, resulting from the economic downturn triggered by the pandemic, which they say has impacted on migrant communities particularly hard.

In the Gulf States, which depend on millions of workers from Africa and Southeast Asia, COVID-19 is intensifying discrimination and increasing abuse against migrant domestic workers, including abrupt termination of their contracts. In Kuwait suicide among migrant workers has surged; Saudi Arabia has deported thousands of Ethiopian workers (A total of 2,968 migrants were returned in the first 10 days of April, UN state), without any medical screening, which the UN humanitarian co-ordinator for Ethiopia said, is ‘likely to exacerbate the spread of COVID-19 to the region and beyond.’ And in Lebanon (where the majority of migrant workers are Ethiopian) and elsewhere across the region, lower income families unable to cover salaries, cover food costs or provide accommodation have laid off domestic staff; resulting in migrant workers being at high risk of forced labour, including prostitution.

Worse still is the case of freelance (‘live out’) workers, whose work has stopped, leaving them with no income, no food and nowhere to go. In Qatar, (one of the richest countries in the world, with over two million migrant workers) which has one of the highest rates of infections per capita, many of those suffering from the disease are migrant workers. Foreign workers from Nepal, Bangladesh, the Philippines are being laid off or remain unpaid, as the economic impact of the virus hits. Some domestic workers (women) have been made destitute. In Singapore, widely thought to have responded well to the pandemic, migrant workers, employed mainly in the construction industry, were thrown to the wolves. And in India following the hasty decision by prime minister Narendra Modi to lock the country down on March 25, (giving people four hours warning!) tens of thousands, perhaps hundreds of thousands of internal migrants working in cities were forced by their landlords to vacate their homes and had no choice but to head back to their native village. Without funds and with transportation suspended, huge numbers were forced to walk the hundreds or thousands of miles home.

Homeless, hungry and at risk of contracting coronavirus, migrant workers were ignored by the Modi regime. Reacting to this wholesale neglect, the UN special rapporteurs on the right to housing and on extreme poverty said on June 4, ‘We are appalled at the disregard shown by the Indian government towards internal migrant labourers, especially those who belong to marginalised minorities and lower castes… the Government has failed to address their dire humanitarian situation and further exacerbated their vulnerability with police brutality (which is commonplace in India) and by failing to stop their stigmatisation as “virus carriers”.’

COVID-19 has highlighted a raft of social inequalities and destructive practices throughout the world. As such issues float to the murky surface of human affairs an opportunity presents itself for reform, for changes in attitudes and practices.

There needs to be a fundamental overhaul of employment rights for migrant workers throughout the world, with migrant workers receiving the same protections as native employees, including access to health care, limits on the hours of work, rates of pay, days off etc.

The Kafala System is used throughout the Gulf States, where the UN estimates there to be ‘35 million international migrants in the Gulf Cooperation Council countries, and Jordan and Lebanon, of whom 31 per cent were women.” Under Kafala a migrant worker, many of whom are domestic staff and therefore out of sight, cannot resign if an employer is abusive, the work exploitative or the conditions unacceptable. Amnesty International relates, that it ‘ties the legal residency of the worker to the contractual relationship with the employer.” The system enables employers to essentially own workers, giving them total control of workers’ movements. This legitimisation of modern-day slavery must be brought to an end immediately.

Refugees and migrants are human beings fleeing violent conflict (are often traumatised), persecution and economic hardship. The journey into an unknown future is often treacherous, always uncertain. In the vacuum left by governments and regional authorities like the EU, that should be processing asylum applications in designated centres and offering safe passage, criminal gangs control migration routes and methods of travel, which are unsafe and extortionately expensive. Deaths are commonplace, abuse and exploitation widespread. If they survive the dangers and arrive in their destination country, all too often they are viewed with distrust and antagonism, instead of being warmly welcomed. They are pushed into the shadows, the margins of society, offered little or no state support and made to feel unwanted.

This must change; all should be embraced, not only those with skills in short supply. The idea of judging who can and cannot enter a country based on some discriminatory points system related to national need — the Australian way, a country with a shameful immigration record, as the UK government is proposing — reduces human beings to commodities, some of which are more valuable on the ‘open market of immigration’ than others and is completely abhorrent.

Deal with the causes of migration, help construct a world at peace by cooperating, sharing and building relationships; reject competition and nationalism in favour of unity and tolerance and see a dramatic fall in the numbers of people forced to leave their homeland, whether in search of safety or opportunity.

DissidentVoice.org, August 15. Graham Peebles is an independent writer and charity worker. He set up The Create Trust in 2005 and has run education projects in India, Sri Lanka, Palestine and Ethiopia.