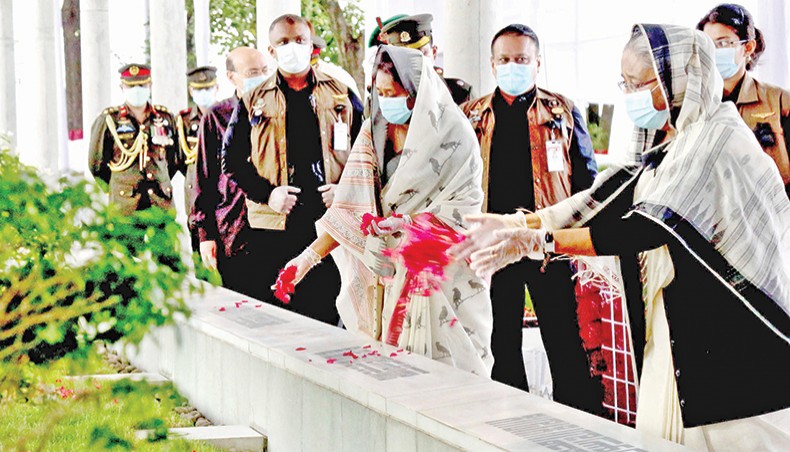 Prime minister Sheikh Hasina, along with her daughter Saima Wazed Hossain, on Saturday sprinkle petals on the graves of her family members who were killed on August 15, 1975. — Focusbangla photo

Homage was paid to the country’s founding president Sheikh Mujibur Rahman recalling his struggle for the independence of Bangladesh while observing the National Mourning Day on Saturday in limited-scale programmes due to COVID-19 outbreak and flood.

The government, political parties and socio-political and cultural organisations observed the day with due respect to mark the 45th anniversary of Sheikh Mujib’s assassination with most of his family members.

This year, AL instructed its leaders and activists to observe the day following the necessary health guidelines considering the novel coronavirus outbreak.

Sheikh Mujib, the undisputed leader of the country’s struggle for liberation, was assassinated along with all but two of his family by a group of army officers at his Dhanmondi house on early August 15, 1975.

His daughters – Sheikh Hasina, now the prime minister, and Sheikh Rehana – survived as they were abroad.

People wearing black badges silently streamed into the Bangabandhu Memorial Museum at Dhanmondi 32 and his grave at his ancestral home at Tungipara, Gopalganj at the day break to pay tributes to the independence hero.

The nation was led by president Abdul Hamid and prime minister Sheikh Hasina in paying homage to Sheikh Mujib.

Hasina laid wreaths at Sheikh Mujib’s portrait at the Bangabandhu Memorial Museum in the morning.

After paying tributes , the prime minister along with her daughter Saima Wazed Hossain visited the Bangabandhu Memorial Museum which witnessed the carnage on this day 45 years ago.

After paying tribute to the family members of Sheikh Mujib at the Banani graveyard in the capital, AL general secretary Obaidul Quader said that the diplomatic efforts had been strengthened to bring back Mujib’s assailants hiding abroad to execute their sentences.

After departure of the prime minister, people from all walks of life and different political and socio-cultural organisations, vice-chancellors of the public universities in the capital, freedom fighters and government officials and employees laid wreaths at Mujib’s portrait. Bangladesh missions abroad also took various programmes marking the day.

Hasina also laid wreaths and offered fateha at the Banani Graveyard for the family members of Sheikh Mujib and others, killed on August 15, 1975.

Prayers were offered at mosques across the country after the Zuhr prayers as well as at all the temples, churches and other places of worship and foods were served to the needy.

The day’s programmes began with hoisting of the national flag at the half-mast.

The AL, its front organisations and different political and socio-cultural organisations marked the day through different programmes, in limited scales compared with previous years due to the twin crises of COVID-19 outbreak and flood.

New Age correspondents in districts reported that the day was observed with due solemnity at all the district and upazila towns while education institutions hosted discussion on Sheikh Mujib’s life and struggles.

Addressing a webinar of the Awami League marking the mourning day, speakers said that the Bangladesh Nationalist Party’s founder Ziaur Rahman wanted to take back the independent Bangladesh to Pakistani era after the heinous killing of Sheikh Mujib.

Taking part in the webinar, Awami League advisory council member Tofail Ahmed said that the people of the country observed August 15 every year with due respect and regret as Sheikh Mujib’s sacrifice and leadership helped Bengalis achieve independent Bangladesh.

AL presidium member Matia Chowdhury said that the Bengalis supported the historic 6-ponit movement of Sheikh Mujib and the whole nation rallied round him when he proclaimed independence.