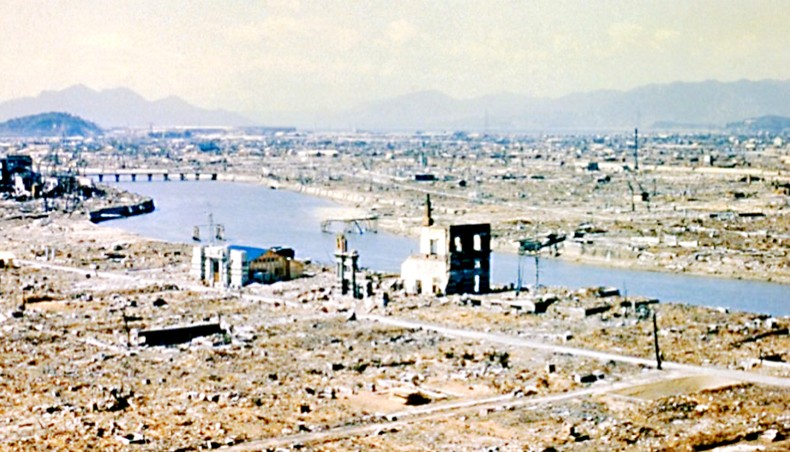 In March 1946, eight months after the atomic bomb was dropped, the city of Hiroshima stood in ruins. — Wikimedia Commons

The essential paradox of disarmament is that nuclear power, and thus nuclear bombs, having been invented, will never go away, writes Robert C Koehler

‘They were covered with blood and burned and blackened and swollen, and the flesh was hanging from the bones. Parts of their bodies were missing, and some were carrying their own eyeballs in their hands. And as they collapsed, their stomach burst open.’

But war is necessary, right?

The speaker, quoted recently on NPR, is 88-year-old Setsuko Thurlow, one of Planet Earth’s remaining hibakushas: survivors of the atomic devastation of Hiroshima and Nagasaki. She was in Nagasaki on August 9, 1945. Since that day, she has devoted her life to the elimination of nuclear weapons — that is to say, to creating awareness. Everybody knows that war is hell, but hell is just an abstraction, easily shrugged off, unless you live through it.

Seventy-five years later, I hear the words of hibakushas and feel my soul plunge into emptiness. Why wasn’t twice enough?

From the Atomic Heritage Foundation:

‘Nuclear fission begins in 0.15 microseconds with a single neutron, initiating a supercritical chain reaction that increases the temperature to several million degrees Fahrenheit hotter than the surface of the sun at the time the bomb casing blows apart.

‘It is the peak of the morning rush hour in Hiroshima. Above the city, the fireball is rapidly expanding.’

.1 seconds: The fireball has expanded to one hundred feet in diameter combined with a temperature of 500,000°F. Neutrons and gamma rays reach the ground. The ionizing radiation is responsible for causing the majority of the radiological damage to all exposed humans, animals and other biological organisms.

Another hibakusha, the writer Kyoko Hayashi, also a survivor of the Nagasaki blast (she died in 2017), wrote a story, H Patricia Hynes informs us, in which she created a new calendar: the ‘A-bomb calendar.’ The calendar designates 1945 as the world’s new Year One, because: ‘The significance of the birth of Christ or Buddha pales in comparison’ to the birth of the nuclear era.

Could anything more clearly say ‘God is dead’? Whether 1945 is officially labelled Year One or not, that’s what it is: the birth of humankind’s transcendence of moral sanity. Yeah, man, our fate is in our own hands now, not that of a divine force, and we’re going to play with that power, tease ourselves with it, to the very brink of planetary suicide (and maybe beyond). The Bulletin of Atomic Scientists, for instance, reset its Doomsday Clock this year to 100 seconds to midnight. Too bad!

I write these words sardonically, not actually believing that humanity’s moral sanity is gone — just that it’s lost in the wilderness, politically disconnected. Apparently no hibakusha, or someone who shares their understanding, has ever been the leader of a nuclear power. No hibakusha has ever been an American president. Is it possible for this to change before a nuclear confrontation — or accident — destroys the future?

The essential paradox of disarmament is that nuclear power, and thus nuclear bombs, having been invented, will never go away. They can’t be ‘un-invented.’ The logic that flows out of this bit of reality seems to be that we have no choice, then, but to push in the opposite direction: spend trillions of dollars endlessly upgrading these weapons. They’re a done deal. It’s too late for peace.

Against this logic: ‘A coalition of progressive groups on Tuesday delivered a petition with over 4,800 signatures to the presidential campaigns of President Donald Trump and presumptive Democratic presidential nominee Joe Biden urging both 2020 candidates to incorporate ‘a vision for peace and serious nuclear disarmament’ into their platforms’, Common Dreams reports.

The inner cynic snorts. This will never happen! But it’s crucial to push this agenda forward anyway, and force one’s personal inner cynic to consider the consequences of doing nothing. (‘Parts of their bodies were missing, and some were carrying their own eyeballs in their hands…’)

And so the coalition has presented the two presidential campaigns with five principles to embrace: 1. No first use of nuclear weapons. 2. Promotion of the Comprehensive Test Ban Treaty: no nuclear testing. 3. Cancel the $2 trillion nuclear weapons modernization program. 4. Lead with diplomacy. 5. Declare global nuclear disarmament as your goal.

I confess that I do not know when or how such principles will ever be politically embraced, though my hope is that a public outcry too large to ignore — larger than the political and financial clout of the military-industrial complex — will eventually push American, and global, politics in that direction. The other scenario is to wait till after the holocaust to take action. That seems to be the choice of the status quo.

So let me add one more principle to this mix. Nuclear disarmament can never be achieved when war by other means is still a go-to option. The time has come to demilitarize completely: Say no to war, and mean it. Without disarmament at that scale, nuclear disarmament will never be a certainty, even if the world dismantles existing nuclear weapons. They cannot be un-invented. What I’m saying is that nuclear disarmament does not mean humanity somehow forgetting — mysteriously no longer knowing — how to rebuild its nukes. It means knowing how not to rebuild them!

This means knowing how not to wage war. If 1945 is truly the new Year One — the year of human transcendence — nuclear weapons are merely the precursor of their opposite: the birth of peace. Can we actually begin to embrace the values we’ve pretended to espouse for far too long? Waging peace is more complex than waging war, but we’ve given ourselves no choice but to take on the challenge. At long last.