THE POLITICS OF WAR

What is Israel’s endgame in Lebanon and Syria? 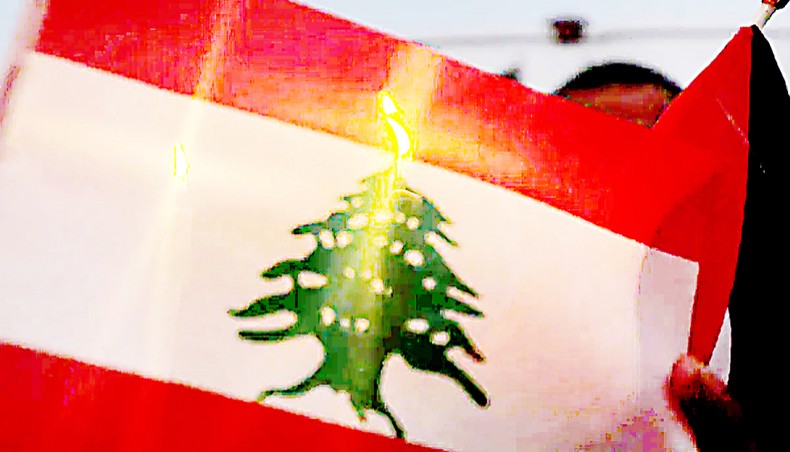 Palestinians carry Lebanese and Palestinian flags during a demonstration in support of Lebanese people following the explosion in the port of Beirut, in Gaza City, Gaza on August 6.— Middle East Monitor/Anadolu Agency/Ali Jadallah

‘We hit a cell and now we hit the dispatchers. I suggest to all of them, including Hezbollah, to consider this’, Netanyahu said during an official tour of a military facility in central Israel.

Netanyahu’s warning did not bode well for Israel when, hours later, a Hiroshima-like blast devastated entire sectors of Beirut. Those who suspected Israeli involvement in the deadly explosion had one more reason to point fingers at Tel Aviv.

In politics and in war, truth is the first casualty. We may never know precisely what transpired in the moments preceding the Beirut blast. Somehow, it may not matter at all, because the narrative regarding Lebanon’s many tragedies is as splintered as the country’s political landscape.

Judging by statements and positions adopted by the country’s various parties and factions, many seem to be more concerned with exploiting the tragedy for trivial political gain than in the tragedy itself. Even if the explosion was the unfortunate outcome of an accident resulting from bureaucratic negligence, sadly, it is still inconsequential. In Lebanon, as in much of the Middle East, everything is political.

What is almost certain about the future, however, is that the political discourse will eventually lead back to Israel versus Hezbollah. The former is keen at undermining the group’s influence in Lebanon, while the latter is insistent on thwarting Israel’s plans.

But what is Israel’s plan anyway? After decades of trying to destroy the Lebanese group, the Israeli government is keenly aware that eradicating Hezbollah militarily is no longer feasible, certainly not in the foreseeable future. The Lebanese group has proven its prowess on the battlefield when it played a major role in ending the Israeli occupation of Lebanon in May 2000.

Subsequent Israeli attempts at reasserting its dominance on Lebanon’s southern border have, thus far, proven futile. The failed war of 2006 and the more recent conflagration of September 2019 are also two cases in point.

Hezbollah is uninterested in inviting another Israeli war on Lebanon, either. The country is on the verge of economic collapse, if it has not already collapsed.

While Lebanon has always been in the throes of political division and factionalism, the divisiveness of the current political mood in the country is more destructive than it has ever been. Losing hope in all political actors, the Lebanese people have taken to the street demanding basic rights and services, an end to the endemic corruption and a whole new social and political contract — unsuccessfully.

While stalemates in politics are somewhat ordinary occurrences, political deadlocks can be calamitous in a country on the brink of starvation. The Hiroshima-like cloud of explosives that shocked the world was a perfect metaphor for Lebanon’s seemingly endless woes.

Former Israeli Knesset member, Moshe Feiglin, was among many jubilant Israelis who celebrated the near-demise of the Arab city. Feiglin described the horrendous explosion as a ‘day of joy’, giving a ‘huge thank you to God. ‘If it was us’, meaning Israel being involved in the deadly explosion, ‘then we should be proud of it, and with that we will create a balance of terror.’

Regardless of whether Feiglin is speaking from a position of knowledge or not, his reference to ‘balance of terror’ remains the basic premise in all of Israel’s dealings with Lebanon, and Hezbollah, in particular.

The convoluted war in Syria has expanded Israel’s war of attrition, but has also given Israel the opportunity to target Hezbollah’s interests without registering yet another aggression on Lebanese territories. It is much easier to target war-torn Syria and escape unscathed rather than to target Lebanon and pay a price.

For years, Israel has bombed many targets in Syria. Initially, it was unforthcoming about its role. Only in the last year or so, it has begun to openly brag about its military conquests, but for a reason.  The embattled Netanyahu is desperate to gain political credits, as he is dogged by multiple corruption charges, which have tarnished his image. By bombing Iranian and Hezbollah targets in Syria, the Israeli leader hopes to garner the approval of the military elite, a critical constituency in Israeli politics.

Netanyahu’s comments before the Beirut explosion were in reference to a series of incidents that began on July 21, when Israel bombed an area adjacent to the Damascus International Airport, killing, among others, a senior Hezbollah member, Ali Kamel Mohsen.

This incident placed Israel’s northern borders on alert. The state of emergency was coupled with massive political and media hype, which helped Netanyahu by distracting ordinary Israelis from his ongoing corruption trial.

But Israel’s strategic interests in the Syria conflict go beyond Netanyahu’s need for a cheap victory. The outcome of the Syria war has the potential of yielding a nightmare scenario for Israel.

For decades, Israel has argued that an ‘axis of terror’ — Iran, Syria and Hezbollah – had to be dismantled, for it represented Israel’s greatest security threat. That was long before pro-Iran forces and militias began operating overtly in Syria, as a result of the ongoing war.

While Israel argues that its recurring bombardment of Syria is aimed largely at Hezbollah targets — the group’s military cache and Iranian missiles on their way to Lebanon via Syrian territories — Israel’s war in Syria is largely political. As per Israeli logic, the more bombs Israel drops over Syria, the more relevant a player it will become when the conflicting parties engage in future negotiations to sort out the fate of that country.

However, by doing so, Israel also risks igniting a costly military conflict with Lebanon, one that neither Tel Aviv nor Hezbollah can afford at the moment.

Israeli policymakers and military planners must be busy trying to analyze the situation in Lebanon, to understand the best way to exploit Lebanon’s tragedy in order to advance Israel’s strategic interests.

The future of Lebanon is, once more, in the hands of war generals.

DissidentVoice.org, August 13. Ramzy Baroud is a journalist and the editor of The Palestine Chronicle. He is the author of five books. His latest is These Chains Will Be Broken: Palestinian Stories of Struggle and Defiance in Israeli Prisons (Clarity Press). Baroud is a Non-resident Senior Research Fellow at the Center for Islam and Global Affairs, Istanbul Zaim University (IZU).