RAB returns from jail gate taking no suspect in custody 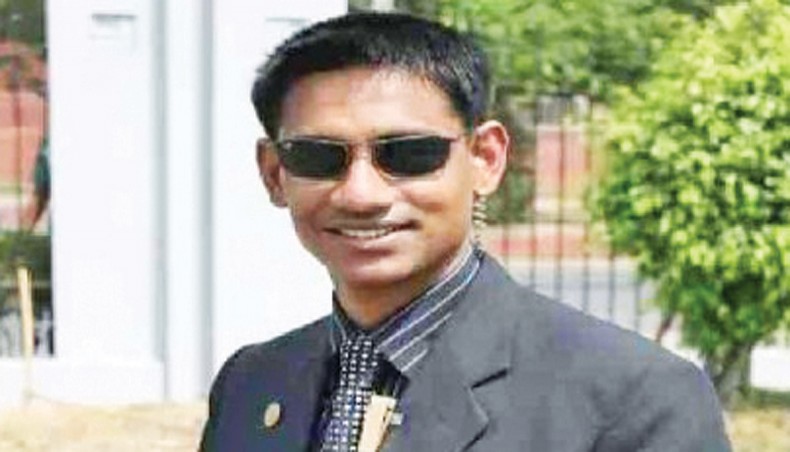 Rapid Action Battalion has changed the investigation officer of the murder case of Bangladesh Army retired Major Sinha Mohammad Rashed Khan in Cox’s Bazar a week after it was given the task of the investigation.

The news of the change surfaced hours after the RAB investigators on Thursday returned from the Cox’s Bazar jail gate without taking on remand seven of the 10 suspects in the July 31 killing of Sinha in Cox’s Bazar.

The RAB investigators waited for 45 minutes with their vehicles and returned without taking the suspects into their custody for interrogation as approved by a judicial magistrate court in separate orders since August 6.

On August 5, the magistrate court gave the RAB the charge of investigating the case filed by the victim’s sister Sharmen Shahria Ferdush.

On August 6, the magistrate allowed for questioning three suspects — Teknaf police station’s suspended officer-in-charge Pradeep Kumar Das, Baharchhara Police Investigation Centre in-charge Md Liyakat Ali, who shot dead Sinha, and sub-inspector Nanda Dulal Rakshit, who filed the case against Sinha and others — in custody for seven days, and allowed another four  policemen to be interrogated at the jail gate for two days.

None of them were taken to the custody so far but the RAB interrogated the four rankers for two days at jail gate.

The Cox’s Bazar jail superintendent Mokammel Hossain said that the RAB team arrived at the jail gate and wanted to take seven of the 10 suspects held in this connection and returned without explaining any details.

With blaring whistle, the RAB convoy appeared at the jail gate to transport the suspects but left the place in exactly the same way, witnesses said.

Mokammel said that as he asked the RAB contingent about when they would take the suspects into custody, the RAB team could not provide any specific time.

Later in the day, the RAB director for legal and media wing, Lieutenant Colonel Ashique Billah, said their team was investigating the ‘motive’ behind the shooting, and as the investigators were trying to get a clear picture, they wanted to talk first to the witnesses of the incident and the investigating officer would decide when the suspects would be taken to custody.

The senior judicial magistrate, Tamanna Farah, in Cox’s Bazar on Wednesday allowed for questioning four policemen, who were initially allowed to be interrogated at the jail gate, and three witnesses named in a first information report by Teknaf police for seven days in custody over their connection to the killing.

Of the seven suspects, the four police personnel were assistant sub-inspector Liton Mia and constables Safanur Karim, Kamal Hossain and Abdullah Al Mamun were in jail following their surrender in the murder case filed by the slain major’s sister Sharmen Shahria Ferdush on August 5 with the judicial magistrate court in Cox’s Bazar, prompting Teknaf police station to lodge a complaint.

Following their surrender on August 6, the judicial magistrate court sent the four to jail allowing the RAB to interrogate them in the jail gate for two days.

Three witnesses — Nurul Amin, 21, Nizam Uddin, 42, and Ayas Uddin, 40 — were also arrested by the RAB on Tuesday at Marishbunia area of Teknaf in the afternoon over their direct connection to the killing.

Lieutenant Colonel Ashique Billah also said that the key witnesses and Sinha’s associate, videographer Shahadul Islam Sifat and filmmaker Shipra Debnath were now in Cox’s Bazar and both would be questioned soon and then the suspects would be interrogated.

Sifat was arrested in two cases filed under various charges including obstruction to perform government duty and carrying contraband drugs against him on July 31 and was released on bail on Monday. The RAB was investigating the cases filed by Teknaf police station against Sifat.

Shipra Debnath was prosecuted under a drug case by Ramu police station for possessing liquor and marijuana, among others, and was released from jail on bail on Sunday amid widespread protests.

The Bangladesh Police Services Association, meanwhile, in a statement on Thursday termed the ‘incident’ on July 31 as ‘unexpected’ and ‘undesirable’.

In the given context, the ill-conceived attempt to make the two extremely important professional forces look as if they are in a face-off is particularly unexpected and very unfortunate, said the statement.