The future of Indian secularism 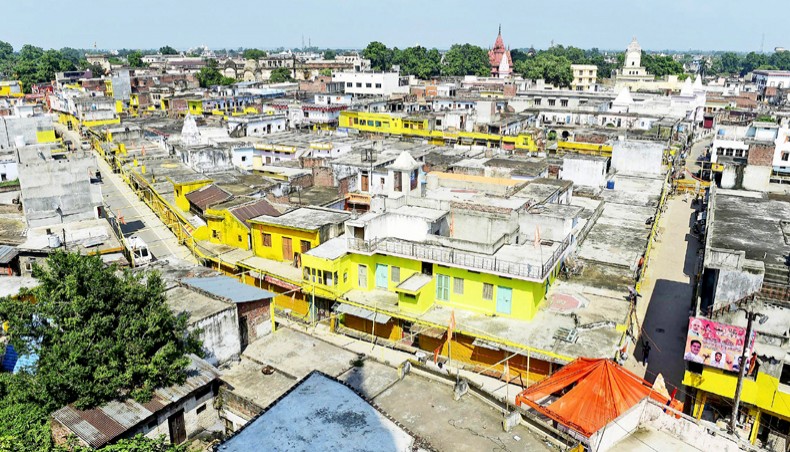 A general view of Ayodhya is pictured on August 4, a day before the groundbreaking ceremony of the proposed Ram Temple. — Agence France-Presse/Sanjay Kanojia

It is premature to pronounce the end of constitutional secularism; it has only suffered a setback and can be revived, writes Rajeev Bhargava

OUR public discourse is resounding with triumphalism on the one hand, and lament on the other over the death or defeat of secularism. It seems as if the bhoomi pujan has burnt its bodily remains, and if anyone cares to claim it, the ashes of secularism will be buried near a dargah or immersed in the Saryu. As a child of the republic founded in 1950, one part of me wishes to join the lament. But the other part, nudging me to contemplate this moment, asks: does anything in India ever die? Silenced, yes; forced temporarily to go underground, maybe; transmigrate to another bodily form under a different name, possibly. But death? Gone forever? No!

CONSTITUTIONAL secularism is marked by at least two features. First, critical respect for all religions. Unlike some secularisms, ours is not blindly anti-religious but respects religion. Unlike the secularisms of pre-dominantly single religious societies, it respects not one but all religions. However, given the virtual impossibility of distinguishing the religious from the social, as BR Ambedkar famously observed, every aspect of religious doctrine or practice cannot be respected. Respect for religion must be accompanied by critique.

It follows that our state must respectfully leave religion alone but also intervene whenever religious groups promote communal disharmony and discrimination on grounds of religion (an inter-religious matter) or are unable to protect their own members from the oppressions they perpetuate (an intra-religious issue). Therefore, and this is its second feature, the Indian state abandons strict separation but keeps a principled distance from all religions. For instance, it cannot tolerate untouchability or leave all personal laws as they are. Equally, it may non-preferentially subsidise schools run by religious communities. Thus, it has to constantly decide when to engage or disengage, help or hinder religion depending entirely on which of these enhances our constitutional commitment to freedom, equality and fraternity. This constitutional secularism cannot be sustained by governments alone but requires collective commitment from an impartial judiciary, a scrupulous media, civil society activists, and an alert citizenry.

PARTY-POLITICAL secularism, born around 40 years ago, is a nefarious doctrine practised by all political parties, including by so-called ‘secular forces’. This secularism has dispelled all values from the core idea and replaced them with opportunism. Opportunistic distance (engagement or disengagement), but mainly opportunistic alliance with religious communities, particularly for the sake of immediate electoral benefit, is its unspoken slogan. Indifferent to freedom and equality-based religious reform, it has removed critical from the term ‘critical respect’ and bizarrely interpreted ‘respect’ to mean cutting deals with aggressive or orthodox sections of religious groups — unlocking the Babri Masjid/Ram temple for puja, and forsaking women’s rights in the Shah Bano case. It has even been complicit in igniting communal violence. This party-political ‘secular’ state, cosying up alternately to the fanatical fringe of the minority and the majority, was readymade for takeover by a majoritarian party. This was accomplished by removing the word ‘all’ and replacing it by ‘majority’: respect only the majority religion; never criticise it, but recklessly demonise others; and ridding the state of the corrupt practice of opportunistic distance not by restoring principled distance but magically abolishing distance altogether. This is untrammelled majoritarianism masquerading as secularism, one that opposes ‘pseudo-secularism’ without examining its own equally unethical practices.

Today, Indian constitutional secularism is swallowed up by this party-political secularism, with not a little help from the opposition, media and judiciary. Yet, I hesitate to pronounce the death of constitutional secularism. Grounded in millennia-old pluralist traditions, it cannot easily be brushed aside. Instead, I prefer the word ‘setback’. Brakes have been suddenly applied to this largely state-driven political project of dealing with inter-religious issues such as communal harmony. It has come to a screeching halt, broken down. Does secularism then have a future?

I SUGGEST two crucial moves to kick-start the discourse and practice of secularism. First, a shift of focus from a politically-led project to a socially-driven movement for justice. Second, a shift of emphasis from inter-religious to intra-religious issues. I invoke the name of two great leaders, BR Ambedkar and Jawaharlal Nehru, to make my point. BR Ambedkar dispassionately observed that when two roughly equal communities view each other as enemies, they get trapped in a majority-minority syndrome, a vicious cycle of spiralling political conflict and social alienation. This was true in the 1930s and the 1940s. Today, feeling extremely vulnerable, Indian Muslims appear to have opted out of this syndrome. When this happens, the syndrome implodes. The result is neither open conflict nor harmony, simply an exiled existence for Muslims in their own homeland.

BR Ambedkar also claimed that when communities view each other as a menace, they tend to close ranks. This has another debilitating impact: all dissent within the community is muzzled and much needed internal reforms are stalled. If so, the collapse of the syndrome unintentionally throws up an opportunity. As the focus shifts from the other to oneself, it may allow deeper introspection within, multiple dissenting voices to resurface, create conditions to root out intra-religious injustices, and make its members free and equal. After all, the Indian project of secularism has been thwarted as much by party-politics as by religious orthodoxy and dogma.

HERE, Europe’s example helps. The fight against the oppression of the church was as much a popular struggle as it was driven by the state. Europe’s secularism provided a principle to fight intra-religious oppressions. Nehru understood this. For him, secularism was not only a project of civic friendship among religious communities but also of opposition to religion-based caste and gender oppressions — an endeavour at the heart of our own socially-driven freedom and equality-oriented reform movements in the 19th century. For the moment, the state-driven political project of secularism and its legal constitutional form appear to have taken a hit. But precisely this ‘setback’ can be turned into an opportunity to revitalise the social project of secularism. Since the Indian state has failed to support victims of oppressions sanctioned by religion, a peaceful and democratic secularism from below provides a vantage point from which to carry out a much-needed internal critique and reform of our own respective religions, to enable their compatibility with constitutional values of equality, liberty and justice. A collective push from young men and women untainted by the politics and ideological straitjacketing of the recent past may help strengthen the social struggle of emancipation from intra-religious injustices. Those who most benefit from upholding these constitutional values, the oppressed minorities, Dalits, women, citizens sick to death with zealotry or crass commercialisation of their faiths must together renew this project.

I am not suggesting that we must hereby ignore inter-religious issues. But having itself produced disharmony, it is surely beyond the capacity of the current state to restore communal harmony. But distance, freedom from mutual obsession, gives communities breathing space. Each can now explore resources within to construct new ways of living together. The issue here is not simple retrieval of older, failed modes of religious toleration. The political project of secularism arose precisely because religious toleration no longer worked. Needed today are new forms of socio-religious reciprocity, crucial for the business of everyday life and novel ways of reducing the political alienation of citizens, a democratic deficit whose ramifications go beyond the ambit of secularism.

If a critique of religion is to come at least partly from within, then its idiom must also draw from local religiosities and the multiple languages in which they find expression. A critique purely from outside, one which is not partly immanent, will not work. Nor can popular-democratic struggles be taken over by middle-class vanguardism. However, such struggles too need support from intellectuals. But to be effective, these intellectuals should already have learnt from a wide variety of cultural traditions, both natal and those outside their immediate ambit. Only then will their voice carry weight, and be heard.