Geneva: the home of lost causes 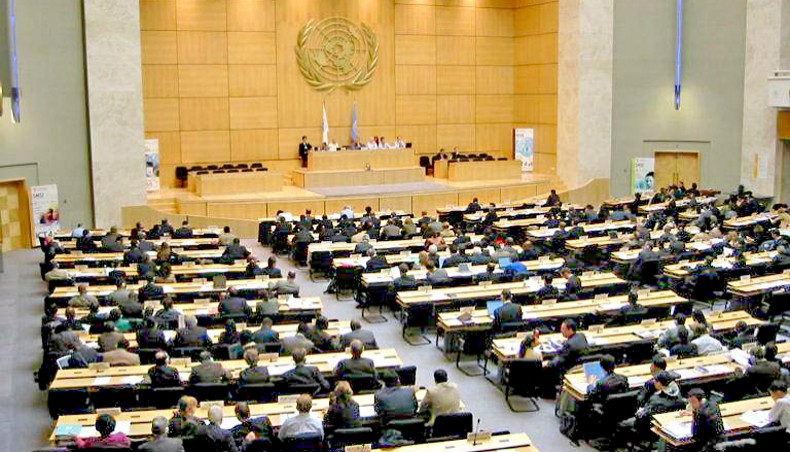 The assembly hall of the Palace of Nations. — Counter Punch/Yann

ANNIVERSARIES call for celebrations. The 75th anniversary of the United Nations was supposed to be the event of 2020 for the multilateral system. The list of scheduled events and publications is too long to mention. Should we celebrate? What is there to celebrate? A global pandemic with no multilateral response? Increasing economic and social inequality with little international leadership? Wars in Yemen, Syria, Libya, and Afghanistan? Growing US-China tensions? Lack of progress on Sustainable Development Goals? World Trade Organisation blocked? US withdrawal from the World Health Organisation?

None of these are reasons for celebration.

A good place to examine the last days of the League is George Slocombe’s 1938 history, A Mirror to Geneva: Its Growth, Grandeur and Decay. In charming, elegant wry prose, Slocombe, who observed many of the Geneva events as correspondent for the Daily Herald, has the sensitivity of a modern gossip columnist combined with the geopolitical sense of a political scientist.

Slocombe sets the scene in Geneva, describes the birth of the League and profiles its major actors. He catalogues Geneva in 1920–21 as ‘a third-rate European city of little international importance’ that ‘was at once a town of treacherous climate, of an illusory hospitality, of a calculating welcome; and a town of Roman relics, of frontier wars, of tyrannous medieval dukes, of Renaissance republics, of sanguinary struggles, of harsh intolerant religions, of intrigue, cruelty and ripe learning.’

After the US senate’s refusal to ratify the 1919 Treaty of Versailles, president Woodrow Wilson, ‘romantically influenced by vague notions of Calvin and Rousseau,’ was able to influence the decision to have the seat of the new organisation in Geneva, a city whose ‘appearance of civilisation, intellectual tolerance and large humanity are deceptive… It looks askance at the man of unconventional or subversive theories; it prosecutes the revolutionary; it offers a chilly welcome to mild and peace-loving cranks and fanatics….’

The League was seen as ‘a battleground between the realists and idealists in world affairs.’ Even the most hard-hearted realist and, certainly Slocombe was one, would be moved by French statesman Aristide Briand’s 1926 speech in Geneva at the Assembly on the occasion of the admission of Germany into the League: ‘Henceforth we will settle our differences by peaceful procedure. Away with the rifles, the machine guns and the canon! Here comes conciliation, arbitration and peace!’

But just as when the pendulum gets to the bottom it can only go up, so when it gets to the top it can only go down. According to Slocombe, ‘The incoming tide of Hitlerism was soon to sweep victoriously up the shores of Germany.’ Although Briand and the German foreign minister Stresemann lunched together in September in Thoiry to discuss economic and political agreements between the two countries, as Slocombe points out, ‘nothing came of them.’ The pendulum had started to descend despite the Kellogg-Briand Pact of 1928, which renounced war as an instrument of national policy. The scale was shifting away from the idealists towards the realists. Briand died in 1931. The inscription on his tombstone reads’ As long as I am here, there shall be no war.’ He was no longer there.

‘The years 1926 and 1930 saw the League’s apotheosis as an organisation for the promotion and maintenance of peace. In 1931 began the period of decline,’ Slocombe summarises.

For example: The Disarmament Conference was an integral part of the League when it opened in 1932. Article 8 of the League Covenant states that ‘the Members of the League recognise that the maintenance of peace requires the reduction of national armament to the lowest point consistent with national safety and the enforcement by common action of international obligations.’ But Germany withdrew in 1933, Italy would only be represented by an observer, and the Japanese participation was virtually non-existent. As Slocombe describes the Conference’s failure through the personality of its president, Arthur Henderson, one is reminded of the current situation of the UN’s Geneva-based Conference on Disarmament that has had no agenda for over 20 years. The Conference lasted only two years while the current conference remains a talking show at best.

The failure of the Disarmament Conference was a precursor of larger problems, specifically the inability of the League of Nations to stop the Japanese invasion of Manchuria, Hitler’s remilitarisation of the Rhineland and the Italian invasion and conquest of Abyssinia. (Modern day comparisons with the changing of European borders in Crimea and Kosovo show the impotence of the UN today.) Economic and financial sanctions had little effect on Italy in what Slocombe describes as ‘the collective surrender of the League to the policy of brute force.’ In addition, many of the great leaders of the positive period were no longer active in League affairs after 1930.

One of the positive notes in Slocombe’s recounting is the creation of the International Labour Office, the only major UN agency today that has civil society (employer and workers’ organisations) as well as government representatives. He is effusive in his praise of its first head, Albert Thomas, who, according to Slocombe, had more influence in Geneva than the secretary-general of the League.

Ever the journalist, Slocombe ends on a most enthusiastic commendation for his profession. Writing in 1938, he says: ‘The heroic days of the League are past, but it still possesses a curious fascination for the world’s newspapers and their correspondents. Geneva is the first laboratory to be created for the manufacture of world opinion. During meetings of the Council and Assembly between four and five hundred journalists assemble in the town. Over a hundred resident correspondents are permanently assigned to the reporting of the League’s activities. The one solitary American of the early days has become a dozen… Geneva, like Oxford, has become the home of lost causes.’

The number of journalists today accredited to the Office of the United Nations in Geneva continues to decline. Stories about the World Health Organisation or World Trade Organisation are often sent from Brussels or Washington.

Slocombe concludes that the League ‘is, after all its failures, its disappointments and its defects, a highly perfected machine such as the world has never constructed.’ And he reviews, in eloquent terms, the construction of the Palais des Nations in Geneva.

We know that the League failed. We also know that the Palais is undergoing considerable renovation. A new home is being constructed for the office of the UN high commissioner for human rights on the site of the Palais. With all the renovation and construction, one question remains on the 75th anniversary of the UN, as it did for the League: Is the Palais and the UN still a home for lost causes?

CounterPunch.org, August 10. Daniel Warner is the author of An Ethic of Responsibility in International Relations. He lives in Geneva.