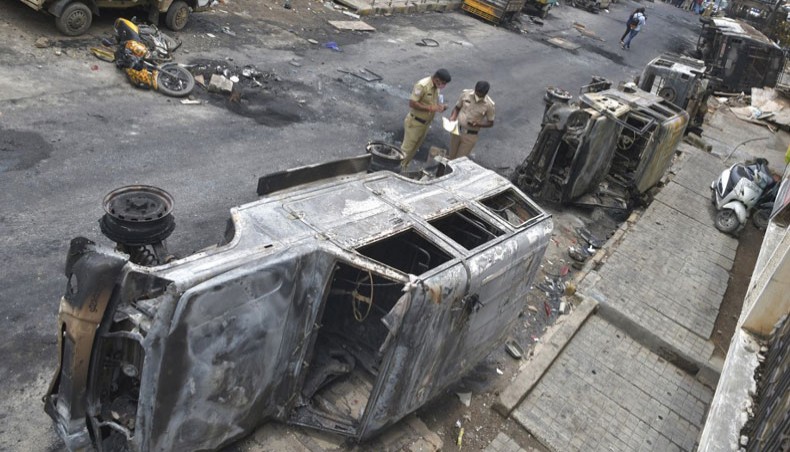 Police officials look at burnt police vehicles along a street in Bangalore on August 12, 2020, after violence broke out overnight in Devara Jevana Halli area following a ‘derogatory’ Facebook post that sparked riots. — AFP

Three people died after a ‘derogatory’ Facebook post about the Prophet Muhammad sparked riots in India’s IT hub Bangalore that saw clashes between police and thousands of protesters, authorities said Wednesday.

At least 60 officers were injured the previous evening as a furious crowd attacked a police station, set vehicles on fire and burnt down the house of a local lawmaker whose nephew was allegedly responsible for the social media post.

Local media images showed protesters trying to barge into the police building and shouting slogans outside the politician’s home.

Police opened fire with live ammunition and tear-gassed the violent crowds. Three people were critically wounded during Tuesday’s violence and at least one reporter was injured, police said.

Among the three dead persons, two have been identified as Wajid Khan (20) and Yaseen Pasha (20). The third person remains unidentified. The bodies are currently kept at the Bowring Hospital morgue as the authorities will conduct Covid-19 tests and post-mortem before handing them over to the family members, reports The Hindustan Times.

Bangalore police commissioner Kamal Pant wrote on Twitter that the lawmaker’s nephew had been arrested for the post, along with about 100 others for rioting and arson, and the situation was now under control.

A ban on gatherings was in effect in some areas of the city on Wednesday, with nearly 10,000 police reservists patrolling the streets to keep order.

India is officially a secular country but has been plagued by a long history of violence between its Hindu majority and Muslim minority.

More than 50 people were killed during religious riots in the capital New Delhi earlier this year, with most of the victims Muslims.