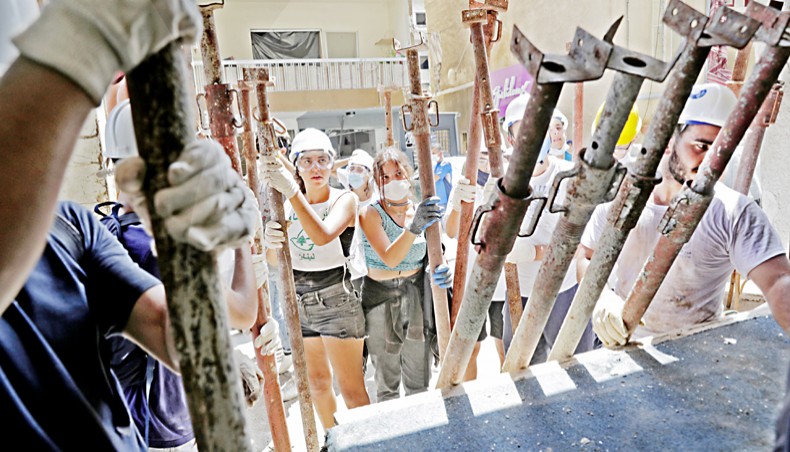 Lebanese youths gather metal poles to support the ceiling of a damaged building in Karantina neighbourhood near Beirut’s port on Tuesday following a huge chemical explosion that devastated large parts of the Lebanese capital. — AFP photo

The resignation of Lebanon’s government deepened political uncertainty as Beirut on Tuesday marked one week since the deadly port explosion rocked the capital and shook the nation to its core.

The August 4 blast, the country’s worst peacetime tragedy which killed at least 160 people and wounded over 6,000, is widely blamed on state negligence and has ignited unprecedented popular rage against the ruling class.

Under pressure from all sides, prime minister Hassan Diab announced his government’s resignation on Monday, even as protesters clashed with riot police near his office for a third consecutive evening of street violence.

In his speech, the 61-year-old sought to cast himself as a champion of the struggle against a cartel of corrupt political overlords, despite the fact many Lebanese have long regarded him as their puppet rather than a victim.

As the shattered and traumatised capital city licked its wounds, its streets still filled with the sound of broken glass being swept away, people welcomed news of the cabinet’s resignation with mixed feelings.

Some saw it as a victory for the protest movement that already forced out the previous government last year. Others warned that, given the power of Lebanon’s factions and family clans, the same old faces may be back before too long.

‘It’s a long fight that won’t end in a month or two,’ said Hussein El Achi, an activist and lawyer defending the resurgent protest camp.

‘But they are weak, they have never been weaker, even among their own people,’ he said of the entrenched oligarchy of former warlords running the country. ‘I am very hopeful ... with what I’m seeing on the street.’

The blast rocked Lebanon at a time when it was already on its knees, having defaulted on its massive debt and seen poverty rise to near third world levels.

Some observers argue that the massive extra burden and the deep popular anger over the tragedy will reduce the room for manoeuvre of Lebanon’s politicians, who also face pressure to agree as a condition for foreign assistance.

‘They will find it very difficult to avoid the kind of structural reforms that the international community has made a precondition for any aid,’ said political science professor Bassel Salloukh of the Lebanese American University.

France has taken the lead of the international emergency response, and President Emmanuel Macron chaired an aid conference that raised a quarter of a million euros.

Macron visited blast-ravaged neighbourhoods of Beirut two days after the disaster and adopted a tough tone with the Lebanese leaders he met, warning that they needed to strike ‘a revamped pact with the Lebanese people’.

For now Diab’s team will continue in a caretaker capacity, as Lebanon faces some of its darkest hours, but negotiations were underway for a successor.

According to the Al-Akhbar daily newspaper, veteran diplomat Nawaf Salam is favoured by Paris, Washington and Riyadh, three of the key outside power brokers in Lebanon.

Iran, sponsor of Lebanon’s dominant Hezbollah movement, also appeared to be on board with such a scenario, which would see Salam head up a neutral government not hostile to the Shiite group.

It was not clear how other factions viewed that solution.

The 66-year-old Salam was Lebanon’s ambassador to the United Nations for a decade before serving a term as a judge on the UN-backed International Court of Justice.

In the blast zone, the increasingly hopeless search for survivors continued.

Close to 20 people were still missing, including firefighters who were sent to the fire that preceded the explosion.

The blast, which was felt as far as Cyprus, ripped the side off towering grain silos that shielded part of the city from the shockwave but spilt thousands of tonnes of grain vital to the country’s food security.

Foreign and Lebanese teams have been camping at ‘ground zero’ near the site of the blast to organise the rescue effort and to restore temporary port infrastructure.

Standing next to a UN cargo plane Monday, the head of the World Food Programme said Lebanon needed all the help it could get because 85 per cent of Lebanon’s food used to come in through the port.

‘You are literally looking at a catastrophe in the making right now if we don’t get the food moving and this port operational,’ David Beasley said.

He said the plane was bringing in temporary warehousing equipment, cranes and generators to replace what was blown to smithereens by the blast.

‘Within two weeks, we’re going to have that port operational, at least to the extent that we could put bread on the table of the people of Lebanon,’ he vowed.

‘Because right now the people of Lebanon are going to run out of bread in about two weeks.’